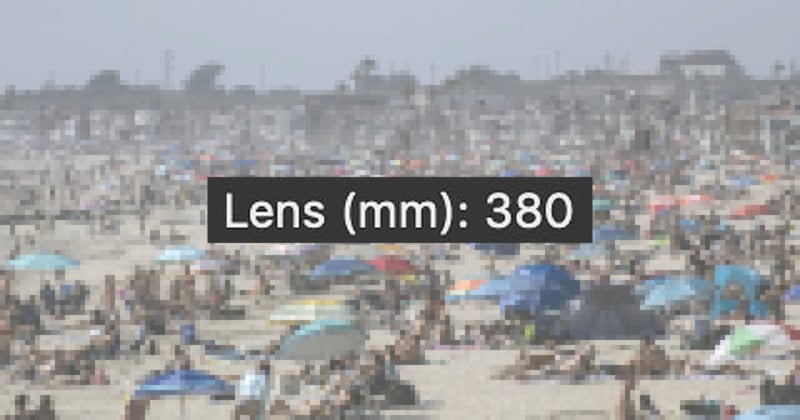 A photo showing crowds packing a beach in California during the state’s COVID-19 lockdown sparked controversy this past week and led to the area’s beaches getting shut down. Now that photo itself is at the center of a heated debate: many are saying that it’s misleading because it was shot with a telephoto lens.


Last weekend, The Orange County Register published an article about crowds packing beaches in Orange County for relief from the heat wave in the area.

The resulting outrage made its way to the top of state government, and California Governor Gavin Newsom reacted by temporarily closing all beaches and state parks in Orange County.

BREAKING: Governor Newsom has just announced he will order ALL beaches in ONLY Orange County closed, rather than all beaches in state as memo said. He called recent crowds at OC beaches “disturbing”. There is a protest planned at Huntington Beach pier tomorrow at noon. @FOXLA

Ironically, the order led to crowds of hundreds of people standing shoulder-to-shoulder to protest the closures.

Aerial view of hundreds protesting the stay-at-home order and closure of Orange County's beaches, both of which were issued by Gov. Gavin Newsom @latimesphotos #HuntingtonBeach #oc #COVID__19 https://t.co/A8tYvSi9wu pic.twitter.com/PviZ1BZGHS

“Supervisor Wagner does not believe it is appropriate to create policy based on photos seen in the papers,” Wagner’s office states in the press release. “Governor Newsom did not like the images he saw in the papers about Orange County beaches and has chosen to base policy that will affect residents without any input from local leaders, medical professionals, law enforcement officials, or residents.”

Executive Editor Frank Pine published a screenshot of the photo’s metadata to prove that the photo was shot when the photographer said it was:

“Some commenters accused us of doctoring the photo (one pointed out that some of the umbrellas in the photo appeared to be the same), while others claimed we used trick photography to make the beach look more crowded,” Pine writes. “Neither of those things is true.

“Photographer Mindy Schauer, who has worked at the Register for more than 20 years, shot the photo from the Newport Beach pier with a long lens because she wanted to get as much of the beach as she could to accurately depict the scene.”

In a Tweet, Schauer says the photo was shot with a 300mm lens, though the EXIF data in the screenshot above says it was specifically captured at 380mm with the full-frame Nikon D5.

Photo taken from the Newport Beach Pier on 4/25/20 with a 300mm lens at 3:30 pm. Photo by: Mindy Schauer/scng #NewportBeach #coronavirus #beachcrowds @ocregister pic.twitter.com/x7HANtktFV

And even though Pine says it’s not true that Schauer “used trick photography to make the beach look more crowded,” it is true that the use of a telephoto lens can make a beach look much more crowded than it actually is simply because it compresses space to make things farther away seem larger and closer to nearby things.

For an example of this, check out this unusual shot from the 2011 film Tinker Tailor Soldier Spy in which two men in the foreground look like they’re almost going to get run over by an airplane landing in the background:

In reality, the plane was actually very far away from the two men, but a 2000mm lens was used to compress the foreground and background to make them look much closer together than they were.

In the case of Schauer’s beach photo, a wider lens would likely have resulted in a very different look — one that may not have gone as viral or been as fitting for the word “crowds” in the newspaper’s headline.

Los Angeles news station KTLA 5 weighed in on the controversy and showed how different the beach in Schauer’s photo looked from views it captured the same day from a helicopter camera:

As you can see, the beachgoers in the aerial shots did appear to be adhering to the social distancing rule of staying 6 feet away from others outdoors whenever possible.

“As a photographer, I looked at that focal length and I thought, ‘that would make the image look a certain way’,” KTLA’s Andy Riesmeyer says in the video above.

Schauer says she used a telephoto lens because she “wanted to get as much of the beach as she could to accurately depict the scene,” but whether or not her choice of focal length led to an “accurate” depiction is now at the center of heated debate.