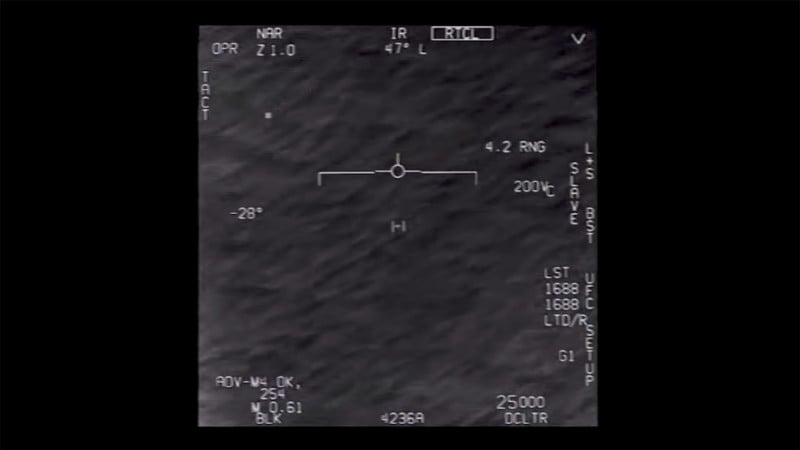 The Pentagon made headlines around the world this week when it officially released several UFO videos that were internally declassified in 2017, confirming their authenticity. And while this has sparked a flurry of “aliens among us” speculation, some are pointing out that there is an optical explanation behind each of the three clips.

First, the clips. The Pentagon released three clips of “unidentified aerial phenomenon” that are colloquially referred to as Nimitz, Go Fast, and Gimbal. You can see all three, in order, in the Guardian video below:

Nimitz was captured in 2004, while Go Fast and Gimbal were both shot in 2015, and you’ve probably seen the footage in various UFO specials on History Channel or through Angels and Airwaves frontman Tom DeLonge’s company To The Stars Academy. But while speculation is running wild again now that the Pentagon has released these videos, all three clips have already been analyzed and explained in detail by Mick West, a debunker, skeptic and writer who explains each in turn on the forum MetaBunk.

To that end, West has released a brand new video yesterday rehashing each of these explanations in turn. The Nimitz and Gimbal videos both probably show distant jets, explains Mick, but what about Go Fast? This clip appears to show an object moving incredibly fast across the surface of the ocean. How can you possibly explain that one away? By referencing Michael Bay, of course.

Jokes aside, West’s explanation—which is backed up by the altitude, angle of view, and speed information available in the footage itself—is that the object in the “Go Fast” clip may not be moving very fast at all. In fact, it might not even be moving. What we’re seeing is the result of one of Michael Bay’s favorite cinematic techniques: parallax.

As West explains in the detailed video above, some quick math reveals that the object in question isn’t near the ocean’s surface, it’s actually halfway between the jet/camera and the ocean below. This means that, even if the object were totally stationary—e.g. a weather balloon—it would appear to be moving at the same speed as the jet itself.

This effect is magnified by the fact that the jet’s camera is shooting at an extremely narrow angle of view (it’s zoomed way in).

You can see this same effect, used cinematically, in this informative breakdown of the Michael Bay style of film making put together by the beloved YouTube channel Every Frame a Painting (RIP):

In the Michael Bay shots, the subject is very clearly stationary, but the same optical principle applies. Just because the background is wizzing by, doesn’t mean that the object itself is moving. And when you compress the background even further by using a telephoto lens, the effect is amplified to dizzying proportions.

If you’re interested in diving deeper into these videos and the optical or post-processing phenomenon behind them—the ‘glow’ around the Gimbal video can be explained by the Unsharp Mask filter in Photoshop—you can dive further into this optical explanation in the video above, or by heading over to West’s YouTube channel.

Photographer Transforms His Garden Shed Into a Giant Camera