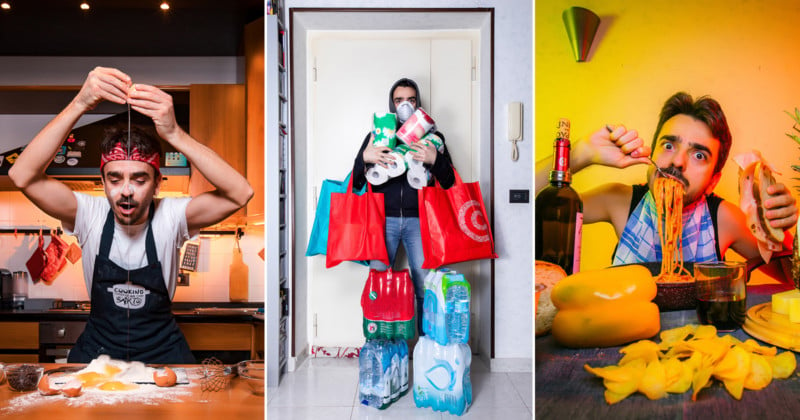 Italian photographer Danilo D’Auria has created a humorous series of self-portraits that seeks to capture the “solidarity, fear, and sometimes even madness” that he’s seen from his follow Italians as they’ve all been forced to stay indoors.

The photo series is called Io Resto a Casa (Translated: I Stay Home) and it takes a humorous swing at documenting “this dark and dramatic period of our history.”

“I decided to take these series of shots to make fun of the expression of the average personality of some people in Italy right now,” says D’Auria. “People who, while finding themselves locked up at home, being bored, feeling lonely, scared or simply in the hopes of getting some attention, unleasheded themselves in a series of activities that aroused my curiosity.”

You can get a peek behind the scenes in the video below:

All of the portraits were taken at home, using only the gear and props he had at hand.

Each portrait was shot with a Canon 5D Mark IV and either a 16-35mm f/2.8 or 50mm f/1.4 lens. For lighting, he used 3 speedlights, a softbox, and two reflective umbrellas. And since Danilo doesn’t have anyone there to help him, each photo is taken using the self-timer.

Scroll down to see some of our favorites from the series—15 “types” of people in quarantine that D’Auria has seen on display through social media during lockdown:

To see all of Io Resto a Casa, head over to D’Auria’s website. And if you want to see more of his work, check out his portfolio or give him a follow on Instagram and Facebook.

Image credits: Photos by Danilo D’Auria and used with permission.

The Opera Desktop Browser Now Has Instagram Built Right In