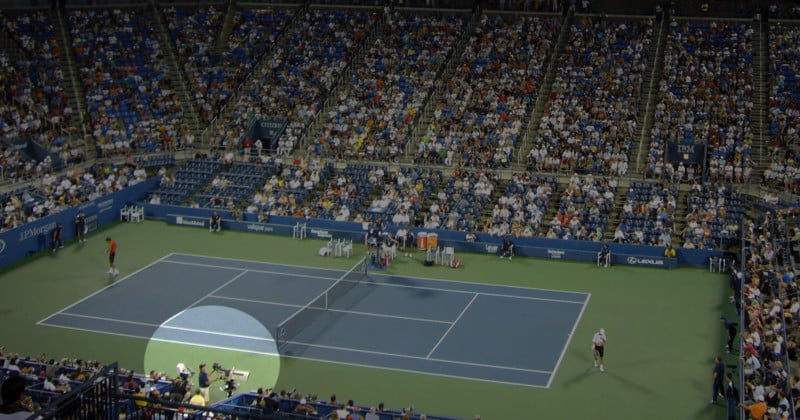 A few months ago, I was hired as an on-court, fixed broadcast camera operator for an Association of Tennis Professionals event as an independent contractor. While we were not broadcast live on a network, we were broadcasting throughout the stadium and event village as well as being taped for the network.

The weekend’s key match was between the youngest player to play Wimbledon and an NCAA ladies’ singles champion. While it was only an exhibition match, the stadium was packed as one of the players was a local hero.

About thirty minutes before the players hit the court, a photographer came over to the broadcast cameras. He wanted to understand where he could shoot from as to not get in the way of the on-court broadcast cameras. We went over the camera positions and the game schedule, including what I would need to capture such as the players entering the court, introductions, gameplay, and post-game which includes on court interviews with both players.

At the end of the match, which the young player won, there was the post-game on court interviews. The photographer who had talked to me stayed behind me or to the side of me, not interfering with my shot. However, the six other photographers as well as a videographer crowded in front of my shot. Being a fixed camera, I was unable to change positions. I tried to get them to move out of the way, to the point of tapping on a photographer, who was kind enough to get out of the way. However, I had no usable shot. The moment that happened, I instantly lost respect for those photographers.

When I had been brought in, I read all the media information on the event’s website including any guidelines. One of the guidelines for photographers was that they must “Avoid obstructing TV cameras,” and if they did not follow the instructions, they would be asked to leave the event. I doubt many of the photographers read the guidelines set forth to them.

For those of you working pro sports events, please read any instructions from the organizer and coordinate with the television camera operators like that photographer did. The chances that you work at the same events are high and we will remember you. In fact, I have worked other events with the courteous photographer and would recommend them to anyone. Everyone will be able to get their shot; I have seen some great ones from behind my camera that were taken at the event.

In the end, if you are credentialed, you are a professional. Please communicate with the other professionals around you. It may help you in the long run.