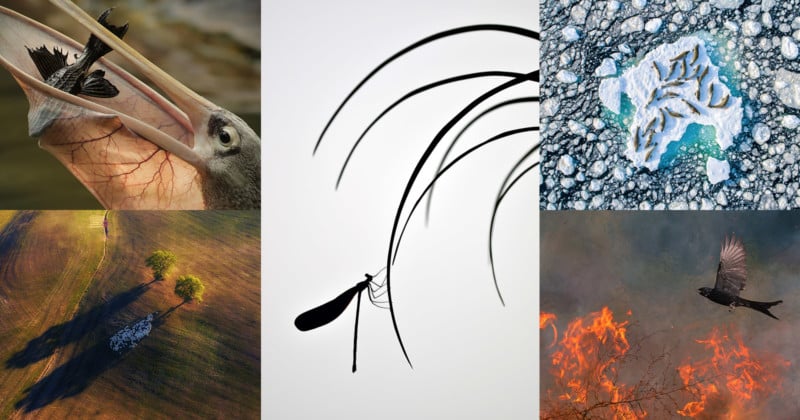 Nature TTL—the online nature photography resource—has revealed the winners of their newly minted “Photographer of the Year” awards, and oh man did the community deliver. From stunning aerial shots to a life-and-death struggle between a Pelican and its prey, there’s a lot to love here.

This was the first year of the competition, but already Nature TTL was able to attract over 7,000 submissions from 117 different countries. The grand prize went to the winner of the Wildlife category, photographer Florian Ledoux, for his photo of crabeater seals lounging on an ice float that looks, for all the world, like an arrow pointing upwards.

Speaking to Nature TTL after he found out that he won, the overjoyed Ledoux took a moment to emphasize how important it that shooters approach this kind of photography ethically.

“It is important that anyone inspired by this style of drone image understands the importance of wildlife and being ethical in your approach,” he said in a press release. “Ensure that your drone does not spook animals or disturb them, and always conduct yourself within accordance of local regulations.”

Scroll down to see the winner and runner up in each category, as well as the winner of the People’s Choice award, which may honestly be the most impressive shot of the bunch:

Caption: Aerial image taken in Tuscany in autumn light. Flock of sheep was hiding in the shade from the sun under the shadow of a tree.

Caption: I am very attached to this photograph, both because of the technical difficulty and because it took years to make it. Over the last few years, I have found myself dozens of times in Iceland, several of which I was lucky enough to witness incredible conditions on the Vestrahorn.

Seeing such a powerful sunrise on the right was already magical, and the very intense rain made things difficult for me but it gave me a great gift: a double rainbow on my left that perfectly compensated the strong light on the right. 88 layers in Photoshop to create a panorama; 6 shots bracketed.

Caption: I was wearing a piece of waterproof overalls in the stream of Dabie Mountain, waiting to observe this Matrona basilaris (damselfly). Matrona basilaris is the king of the stream here. There is a male Matrona basilaris every 3 meters. They were waiting for the female to fly over its territory; the male chased away a male opponent and then stopped at the tip of the grass.

Against the background of the sky, I discovered the connection between the lines of the grass and the subject. Nature itself is a simple painting.

Caption: I have observed and photographed damselflies on the ponds in my local park in London for years. Last summer, during the July heat- wave on an especially hot and muggy but overcast day, I went with the intention of trying to capture some shots using exposure compensation as I’d recently begun experimenting more with it.

The damselflies were out in great numbers all over the surface of the water and due to the lack of direct sunlight I was able to shoot with a bit of positive compensation to leave the water white or near white. It then just became a question of looking for the most photogenic pairing and this group stood out due to the symmetry.

This breeding behaviour lasted exactly 1 day, as the next day I went back and the activity had already subsided for another year.

Image title: Above the Crabeater Seals

Caption: Aerial view of crabeater seals resting in a group on the ice after feeding at night. The aerial view allow us to better understand how the wildlife use the ice to rest and give birth.

Caption: The baby little owl made an appearance within the window during a burst of early morning sun. A couple of jackdaws spooked by his presence started dive bombing him. After a few passes I noticed the jackdaw’s reflection in the adjacent windowpane and decided to try and capture this behaviour.

The startled look on the little owl’s face adds a little humour to the image.

Caption: For the last 4-5 years I have seen that, at the end of every winter, farmers of this huge grassland generally burn the grass and reeds to clean the land for upcoming crops. When the fire spreads across the land, small insects start coming out. Then the brave Black Drongo starts capitalizing on such a moment by eating them and flying above the live fire.

The birds usually sit on a branch fearlessly and watch the movements of the insects as the fire spreads into a new area, then it flies close to the fire for the catch. This is a full frame image, and the calmness of the Drongo reminds me of the Roman Emperor Nero.

Image title: The Cradle of Life

Caption: Late winter in February, the soda lakes are full of life in Hungary. These lakes are the sanctuary of wide variety water birds. There is a nice, but unknown, hidden lake between the village of Tömörkény and Pálmonostora which is surrounded and covered with cane and sedge – therefore impossible to observe.

I took this aerial photograph by a remotely controlled drone. I use a special technique to slowly approach the birds from very high altitude, which is a method also used by conservation experts to count the population of the birds.

In the picture the wild ducks roil in the muddy water and leave lines in the yellowish-brownish, sometimes purple, water coloured by organic materials coming from decomposition of cane. The sparkling colour pallet of the image is composed by the blue sky and the white cloud reflection on the water’s surface.

Caption: This is the Great White Pelican (Pelecanus onocrotalus), struggling with a non-native fish. These wonderful birds are free to roam, but have established a large colony on one of the artificial islands in the old Jurong park in Singapore.

I had set up my camera to take some portraits and watch their behaviour, and noticed one particular bird that had caught one of the big fish from the pond. I watched, intrigued, as the bird swam in circles, dipping his bill, taking water, then raising his beak to attempt to swallow his large prey. But every time the fish extended its sharp spines on its fins – you can see it hooked on the beak here – and lodged itself firmly.

This went on for over 20 minutes, with no sign of either party tiring. I was fascinated to see the intricate veins in the birds throat pouch, as the overcast day backlit the thin skin, and I had to move and crouch low to the ground to get the shot.

To see even more of the images selected this year, or if you’d like to learn more about (or from) the folks at Nature TTL, click here. Given the caliber of this very first batch of winners, we’re excited to keep an eye on this newly-minted photography contest moving forward.

Nat Geo: Those Viral Animal Photos You’ve Been Seeing on Twitter are Fake