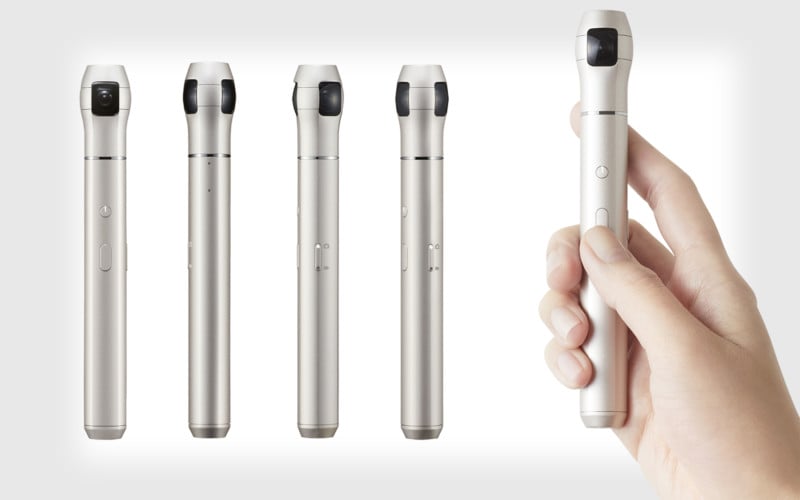 Ricoh has created a new company called Vecnos, a start-up that will create “360-degree and other specialized cameras, software and apps,” starting with a pen-like 360° selfie camera that’s about the size of a chunky fountain pen.

Vecnos is a strange creation, partly because it seems to compete directly with Ricoh’s popular Theta cameras. At first, some believed Ricoh was actually spinning off this part of the business. But as DPReview reports, this is not the case.

Ricoh will keep making Theta cameras, while Vecnos sets out to “reinvent the selfie for social media natives” by releasing an extremely compact and convenient 360° camera targeted at the selfie generation:

There’s precious little information available about Vecnos and its first product. The camera is hoping to be the first 360° system that’s portable and convenient enough to actually use regularly, while Vecnos as a company is intent on making “advanced imaging” more accessible to the masses. That’s really all we know for now.

“Enabled by advances in technology, combined with new social networking platforms, we are building a new generation of cameras, with our first product designed to reinvent the selfie and be used by a younger consumer,” says Vecnos CEO Shu Ubukata. “Our objectives are to combine ease of use with advanced capabilities for shooting, enhancing and sharing images, in beautiful and elegantly designed products that people will want to use. We aim to inspire a new generation.” The spin-off is made up of the core design team behind the original Ricoh Theta, and they’ve already hit the ground running. But only time will tell if Vecnos will be able to succeed where other camera makers have failed, and bring 360° imaging into the mainstream.

To learn more about this company, head over to its nascent website. As for the unnamed pen-like 360° camera, expect that to get an official launch sometime in 2020.

Canon 85mm vs 85mm DS: Is Canon’s ‘Defocus Smoothing’ Worth the Price?