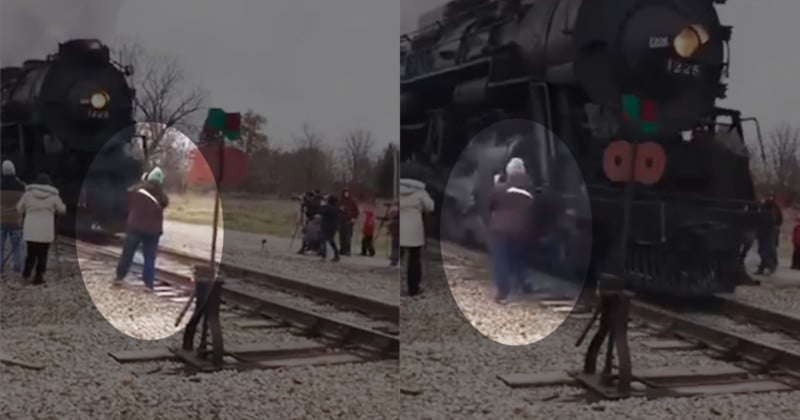 A video released by local authorities in Carland, Michigan captured the scary moment when a photographer was nearly hit by a passing train she was photographing. Fortunately, the train “only” tore a piece off of her coat, leaving her unscathed… if shaken and (hopefully) wiser.

The video was published on the Shiawassee County Sheriff’s Office’s Facebook page as a warning to would-be train photographers to exercise extreme caution.

The video below shows the legendary Pere Marquette 1225 steam engine–also known as the “North Pole Express” and featured in the animated film The Polar Express–passing through Shiawassee County pulling coaches full of passengers to “the north pole.” Residents of Carland country have taken to watching and photographing the locomotive as it passes through, but as the Sheriff’s office explains in their post, people “don’t always use good judgement when watching or photographing her along the way.”

“In hopes of preventing a tragedy we ask that you watch the following video from Carland where a photographer’s coat is actually ripped by the passing locomotive and remember trains overhang the tracks by at least 3 feet in both directions,” reads the Facebook post. “For your safety it is illegal to be on the tracks unless you are at a designated crossing. Railroad tracks, trestles and yards are all private property where trespassers are subject to arrest and fine.”

The moment comes and goes in a flash, but you can see it coming from a mile away. The photographer is obviously too close to the tracks (on them, actually) and it’s incredibly fortunate that their coat ripped. It doesn’t take a big mental leap to imagine what might have happened. We can only imagine the terror going through the engineer’s mind as the train passed, frantically blowing the whistle in hopes of avoiding tragedy.

As we’ve reported time and again, train photography is extremely dangerous, almost always illegal, and never worth the loss of a life. It was just a month ago that a high school senior lost his life in Oregon during a shoot on the tracks.

Watch an Underwater Photog Swim with a Ginormous Great White