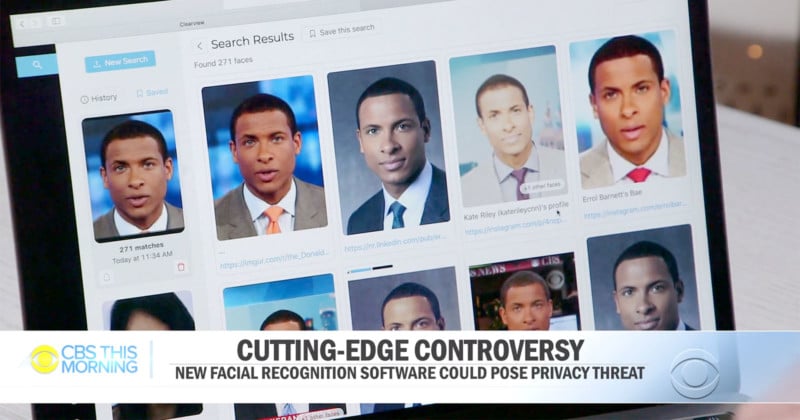 Facebook and Google have both sent cease-and-desist letters to Clearview AI demanding that the facial recognition startup stop scraping photos and videos to build up its face database.

Clearview AI develops software that matches people’s portrait photos to their online photos with 99.6% accuracy, and the powerful tool is reportedly being used by over 600 police departments around the country to identify people after crimes.

Clearview AI’s 31-year-old founder and CEO Hoan Ton-That defends his startup from privacy-wary critics by arguing that all the 3+ billion photos in its system are public already and that the software is used by law enforcement for investigation rather than as a 24/7 surveillance system.

“There is also a First Amendment right to public information,” Ton-That tells CBS News in a newly aired interview. “So the way we have built our system is to only take publicly available information and index it that way.

“Google can pull in information from all different websites. So if it’s public, you know, and it’s out there, it could be inside Google search engine, it can be inside ours as well.”

Public or not, major tech companies aren’t happy with the way Clearview AI is using the data stored on their servers. Here’s a statement Google’s YouTube provided CBS News:

YouTube’s Terms of Service explicitly forbid collecting data that can be used to identify a person. Clearview has publicly admitted to doing exactly that, and in response we sent them a cease and desist letter. And comparisons to Google Search are inaccurate. Most websites want to be included in Google Search, and we give webmasters control over what information from their site is included in our search results, including the option to opt-out entirely. Clearview secretly collected image data of individuals without their consent, and in violation of rules explicitly forbidding them from doing so.

And here’s a statement provided to CBS News by a Facebook spokesperson, who says Clearview AI’s activities violate Facebook’s terms:

We have serious concerns with Clearview’s practices, which is why we’ve requested information as part of our ongoing review. How they respond will determine the next steps we take.

Law enforcement has reportedly used Clearview AI to successfully solve crimes ranging from shoplifting to child sexual exploitation to murder, but public outrage, tech industry crackdowns, and government regulations are things Clearview AI may have to overcome if it hopes to continue providing this service in the long run.

(via CNET via Engadget)

Shooting the Aurora Out of an Airplane Window