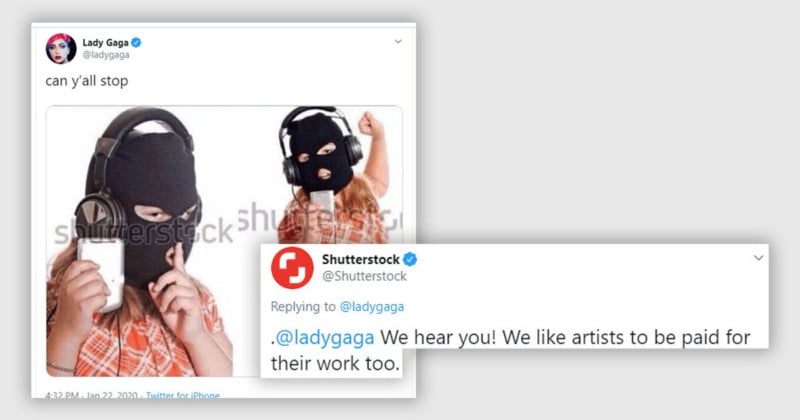 After Lady Gaga’s new song “Stupid Love” leaked onto the Internet and went viral last weekend, the singer called out fans who had listened to the unauthorized release. Problem was, Lady Gaga’s Tweet used “pirated” stock photos that had “Shutterstock” watermarks splashed across them, and this unauthorized usage didn’t escape the company’s notice.


On January 22nd, after “Stupid Love” leaked, went viral, and then started getting taken down on Twitter, Lady Gaga Tweeted the message “can y’all stop” with two stock photos of a girl wearing a ski mask while listening to music. The message was clear: fans listening to and spreading the leaked track were furthering music piracy. 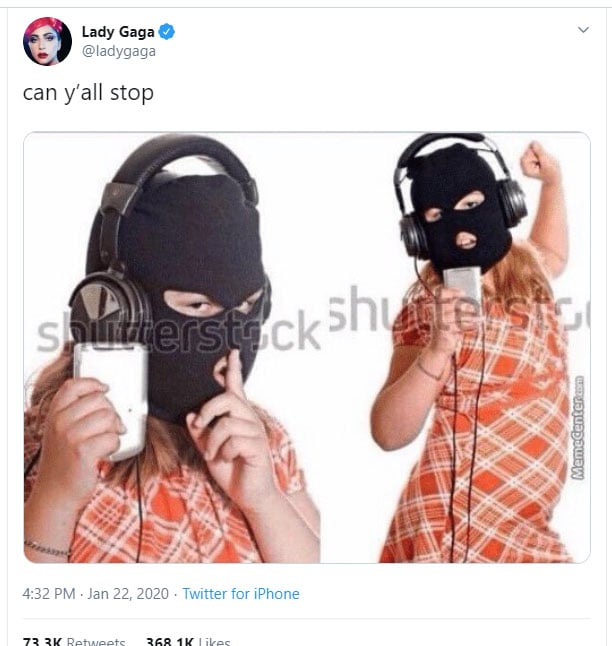 Just hours later, Shutterstock replied to the Tweet and pointed out the hypocrisy of wanting to get paid for music while failing to pay the photographer whose work she broadcast to her 80+ million Twitter followers. 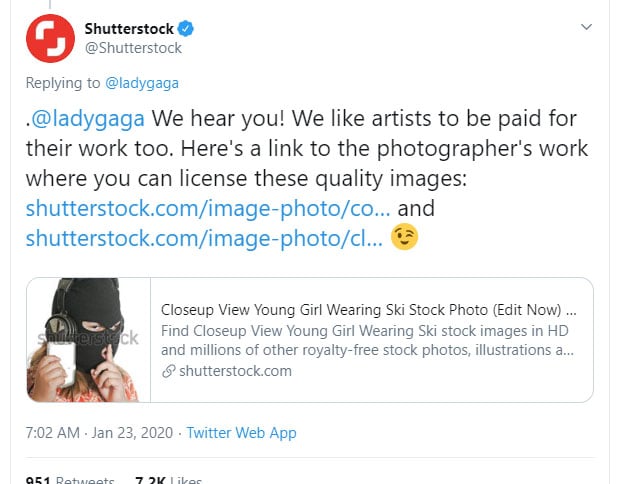 “We hear you!” Shutterstock writes. “We like artists to be paid for their work too. Here’s a link to the photographer’s work where you can license these quality images.”

The Tweet links to the two original stock photos on Shutterstock’s website, titled “Concept image of a young girl dancing to pirated or illegal music downloads on her mp3 player, isolated against a white background” and “Closeup view of a young girl wearing a ski mask, listening to illegal music, isolated against a white background.”

Lady Gaga’s fans have flooded Shutterstock’s Tweet with replies criticizing the stock photo company, accusing it of trying to take advantage of Lady Gaga and arguing that the watermark is clearly on the photo (which isn’t quite relevant to the photographer getting paid):

funny how you‘re only interested when it’s a viral tweet huh and the watermark is right there pic.twitter.com/L3NW3NpZm0

watermark is right there. instead you should pay her for the free promo

It turns out the photographer behind the stock photos is children’s author Richard Nelson, and he doesn’t seem to mind not getting paid for the usage — in fact, he Tweeted out a non-watermarked version of Lady Gaga’s message for the singer to use:

@ladygaga As the photographer of this picture, I've got you. 🤣🤩😘 pic.twitter.com/UtY1DudXkB

“@ladygaga making one of my old stock photos viral,” Nelson Tweets, amused by the unexpected exposure. “Hahaha. I just had to share.”

But from the conversations this incident has sparked online, it seems clear that the vast majority of photographers agree with Shutterstock: copyright is important, but not just for musicians — it needs to be respected and defended for all artists, including photographers.