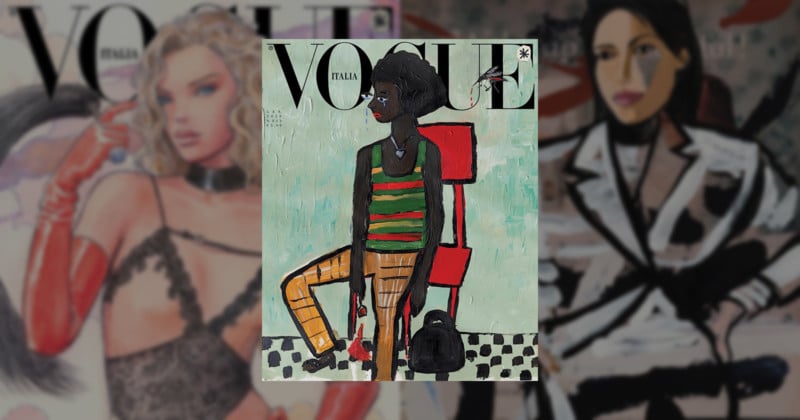 Italian Vogue‘s first issue of 2020 will feature zero photography in order to “send a message” about sustainability. Instead of photos, the issue is illustrated by artists, avoiding the “travelling, shipping entire wardrobes of clothes or polluting in any way” involved in a typical Vogue photo shoot.

The issue was announced prominently on the magazine’s Instagram, complete with an all caps caption which reads, “NO PHOTOSHOOT PRODUCTION WAS REQUIRED IN THE MAKING OF THIS ISSUE.”

*NO PHOTOSHOOT PRODUCTION WAS REQUIRED IN THE MAKING OF THIS ISSUE A preview of the January 2020 Vogue Italia Special Issue on newsstands January 7th @Cas_Amandaa @Cas_Namoda featuring @Ambar_Cristalz in @Gucci Cover 4 of 7 *** "All of the covers, as well as the features of our January issue, have been drawn by artists, ranging from well-known art icons and emerging talents to comic book legends, who have created without travelling, shipping entire wardrobes of clothes or polluting in any way. The challenge was to prove it is possible to show clothes without photographing them. This is a first, Vogue Italia has never had an illustrated cover: and as far as I know no issue of Vogue Italia in which photography is not the primary visual medium has ever been printed. Thanks to this idea, and to these artists' process, the money saved in the production of this issue will go towards financing a project that really deserves it: the restoration of @FondazioneQueriniStampalia in Venice, severely damaged by the recent floods.” @efarneti See more via link in bio. Full credits: #AmbarCristalZarzuela @nextmodels Editor in chief @efarneti Creative director @ferdinandoverderi Fashion @franragazzi @robertaninapinna Casting directors @pg_dmcasting @samuel_ellis @ DM Fashion Studio #VogueValues

The post goes on to explain that all of the covers and features in the January issue were drawn by artists in order to significantly decrease the issue’s environmental footprint and prove that “it is possible to show clothes without photographing them.”

In an article on the Vogue website, the Italian magazine’s Editor in Chief Emanuele Farneti outlined the kind of environmental impact that they were hoping to avoid by cutting photography out of the creation of this issue.

The above are approximations based on the production involved in the eight stories comprising Italian Vogue’s September 2019 issue. And apparently, the list goes on…

“This month we wanted to launch a message,” says Farneti. “That creativity – which has been a cornerstone of Vogue for nearly 130 years – can, and must, prompt us to explore different paths.” Paths that do not include cameras, camera equipment, or photographers.

There are seven covers in all and several features that make up the magazine itself, and by choosing to go with artists instead of photography, the magazine was able to save thousands of dollars. Money that will now go towards financing the restoration of the Fondazione Querini Stampalia in Venice, which was badly damaged in the recent flooding.

The decision to eschew photography from a fashion magazine will no doubt raise some eyebrows and ruffle some feathers. Photographers are used to being replaced by robots or royalty free stock or ever-more-affordable newcomers to the industry, but they don’t often have to compete with traditional artists or painters.

Of course, after this statement piece, Italian Vogue will go back to business as usual, but the message they sent—that photography is unsustainable and bad for the environment—could well have a lasting impact on a culture that already undervalues photography and photographers on a regular basis.

Advice for Beginner Photographers in 2020