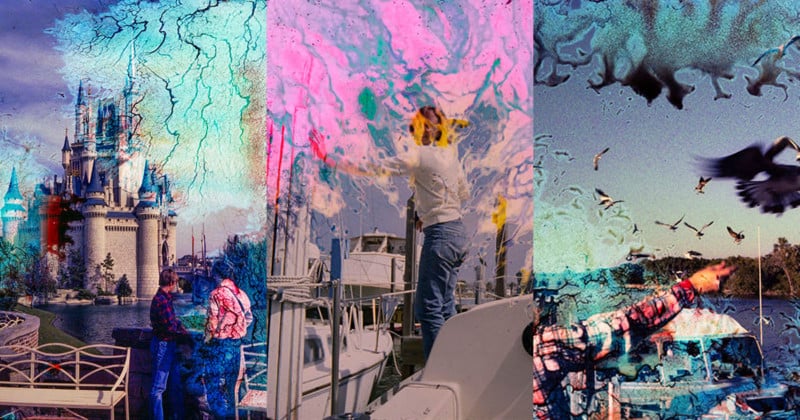 A few years ago, I saw an article on water-damaged film that claimed the damage was due to bacteria and fungus eating the film. Having a bit of experience with fungus and bacteria from various scientific projects over the years, I thought I would explore this topic. Could I speed up the process? I also wanted to know which film aged the fastest, and was bacteria or fungus really responsible for the damage?


After performing a number of experiments to try to get fungus or bacteria to grow on a selection of film in an incubator, I was able to conclude that neither fungus nor bacteria are responsible for the aging effects seen in improperly stored film. The effects of heat and water acting alone are responsible for some interesting patterns. This process is easy to reproduce and takes about a week.

How to Do It

Place the selected slides in a rack with enough water to cover the bottom, but do not submerse any part of the image on the slides. Seal in an air-tight food container and leave at 90F (32 C) for 7 days. Sealed in the container the humidity will be kept at 100%. An incubator was used to keep a constant temperature and not cycled.

Check the images every day to see how they are aging. When the desired results are achieved, let the slides dry out. It is hard to gauge the full effect of the change to the slide when the slide is still wet. Let the slide dry off to see the full color, keep the film in the incubator checking it every day until the desired pattern is achieved.

To digitize the slides, I photographed them in a slide duplicator with a 105mm macro lens on a Canon 5D Mark III. This was substantially faster than scanning the slides.

The following images are the results of this process.

Slides that have large dark areas tend to turn out interesting, as do slides with lots of different areas of bright colors.

Kodachrome creates a dripping/melting pattern and tends to lose contrast.

Ektachrome slides degraded quite nicely, with a dripping,/wrinkle effect.

Each frame was a surprise on how it would respond to this aging process.

If you want to keep your slides in good condition, do not store them in high humidity or high temperatures.

The results show that if you are wondering what to do with your old slides that are of questionable value, why not try the distressed look?

If you decide to give this a try, I would be interested to hear about your results.

A few more images from this study are below:

About the author: Ted Kinsman is the 2019 recipient of the Schmidt Laureate or outstanding contributions to the progress of biocommunications. Kinsman has worked as an optical engineer, a physicist, and a physics instructor before joining the Photographic Sciences Dept. at RIT. He is one of the few active high-speed photographers able to photograph at times less than 1/1,000,000th of a second. Recently, Kinsman’s work has expanded to the x-ray region of the spectrum where he continues to explore imagery for books and magazines. His work has appeared on The Discovery Channel, Crime Scene Investigations (CSI), The X-Files, South Park, The Tyra Banks Show, and The Frozen Planet series. Kinsman is currently an Associate Professor in the School of Photographic Arts and Sciences (SPAS) where he teaches Photographic Instrumentation, Scanning Electron Microscopy, and High-Speed Imaging. His most recent book is Cannabis: Marijuana under the microscope.

Beyond Mere Composition: Getting Over the Rule of Thirds and Golden Ratio