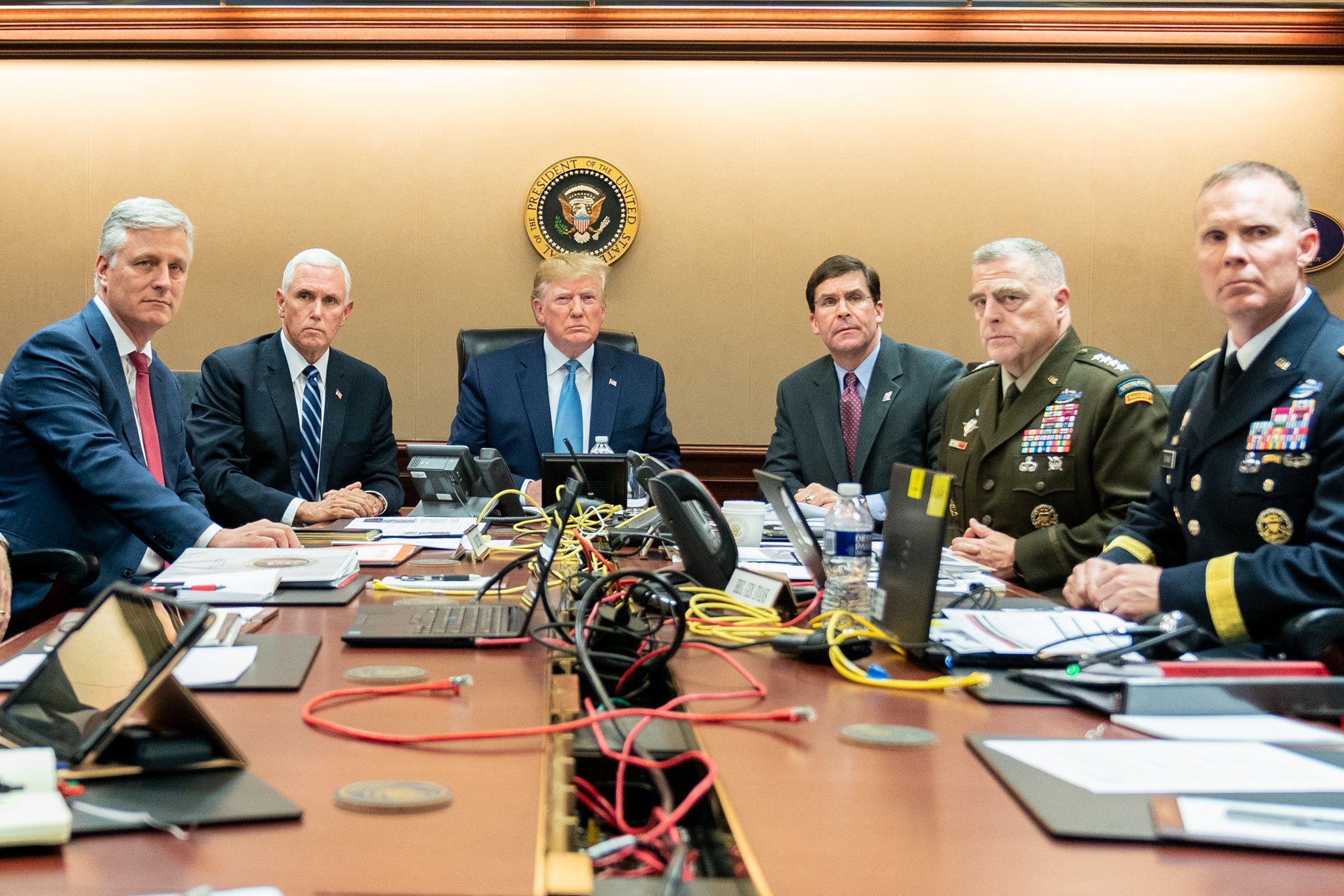 This past weekend, the White House posted a photograph that showed President Trump and several others monitoring the raid that led to the death of ISIS leader Abu Bakr al-Baghdadi. But while the photo shows a major military win for the US, it has drawn criticism online, with critics claiming that it’s as a poor attempt at recreating a similar photo taken during the Obama administration.

The photo was originally posted to Twitter by White House Director of Social Media Dan Scavino Jr. alongside a caption that described the photo as taken “Saturday, Oct. 26, 2019, in the Situation Room of the White House monitoring developments as U.S. Special Operations forces close in on notorious ISIS leader Abu Bakr al-Baghdadi’s compound in Syria with a mission to kill or capture the terrorist.”

…on the Joint Staff, at right, Saturday, Oct. 26, 2019, in the Situation Room of the White House monitoring developments as U.S. Special Operations forces close in on notorious ISIS leader Abu Bakr al-Baghdadi’s compound in Syria with a mission to kill or capture the terrorist.

The original controversy around this photo was sparked by former Regan and Obama White House Photographer Pete Souza, who posted a tweet calling the time stamp of the photograph into question:

Souza later walked back what seemed like a claim that the photo was staged, clarifying that “Trump himself said he didn’t arrive to the Situation Room until ‘around 5pm'” and pointing out that the photo could have been taken during the raid:

Just to be clear, I didn't say it was staged. Trump himself said he didn't arrive to the Situation Room until "around 5pm". So it's definitely possible the photo was taken during the raid. https://t.co/h3yx8BbLAT

Based, in part, on a tweet by journalist Ben Taub, Snopes confirmed that the photograph does not seem to be staged. The raid itself was likely going on between 5pm and 6pm Eastern time, if not later, which would correspond with the time stamp of the Trump photograph.

This isn't true. First on-the-ground posts about a helicopter raid in Idlib started surfacing shortly after 5PM EST, 11PM in Syria. Yes, the photo looks staged as hell, but this timing controversy is based on a false premise. https://t.co/eIGqv2e8MS

Souza’s photograph below comes off as candid documentary photography: the president is off to the side, everyone is watching the screen, and the team is a varied state of dishevelment. The photo of President Trump, by comparison, looks like an official portrait: a straight on shot with the President surrounded by his military leaders, all striking an appropriately aggressive pose and facial expressions. To say nothing of the mess of cables in the middle of the table. Critics of the President see the photograph as a failed attempt by President Trump to “one-up” former President Obama with his own Situation Room photograph, while Trump’s supporters see it as an “epic” shot that communicates all of the stern gravitas that this moment demands.

I Pretended These Macro Photos Were Aerials And People Believed It

NVIDIA AI Can Turn Your Pet Into Other Animals