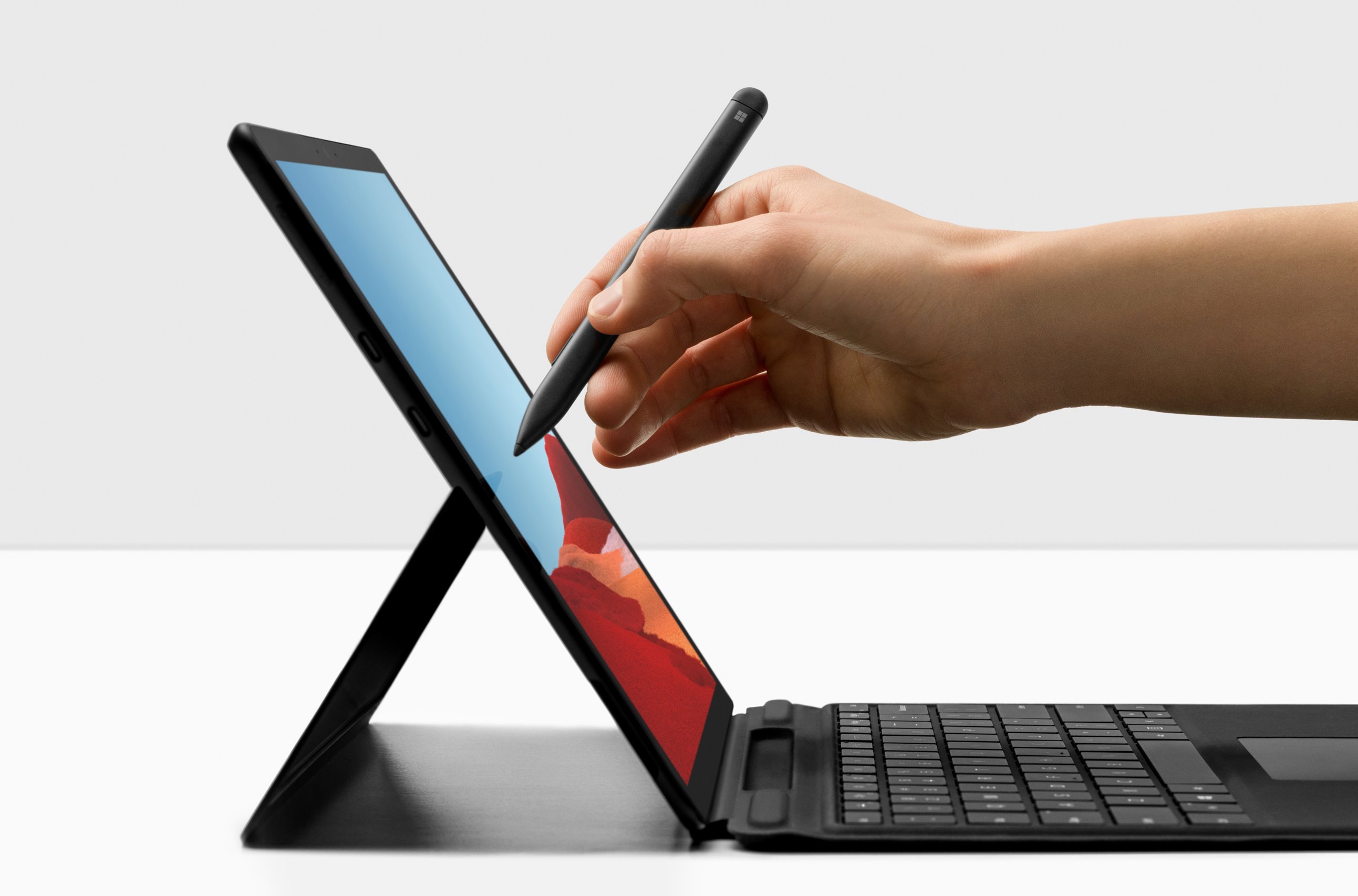 During today’s Surface event, Microsoft unveiled a slew of gadgets, dual-screen concepts, and even a lighter operating system. But for photographers who have been eyeing the iPad Pro as a great way to take their work on the go, the most interesting product is the new Surface Pro X.

The Surface Pro X (pronounced X, not 10… sorry Apple) is a new ARM-based (mobile CPU) option that joins Microsoft’s Surface Pro lineup, bringing with it a sleek new design, better battery life, LTE connectivity, and a promise that Adobe Creative Cloud apps will be coming to the system “soon.”

On the surface (pun intended) the Surface Pro X looks like a Surface Pro 7 with a nicer 2880×1920 13-inch display, smaller bezels, rounded edges, and an ultra-portable 5.33mm-thick design that makes it a mobile, go-anywhere 2-in-1 device. Is this starting to sound familiar?

Inside, the Pro X features the all-new Microsoft SQ1 CPU co-created with Qualcomm, which boasts PC-class performance, integrated LTE connectivity, and an advertised 2 teraflops of graphics processing power, making it “the fastest Qualcomm processor ever created for a PC.” And since there’s no room for a regular Surface Pen on the side, the Surface Pro X is joined by the Surface Slim Pen that slots (and charges) conveniently into the included type cover.

Since the Surface Pro X doesn’t use a full-fledged CPU like the Intel chips inside the Surface Pro 7 or the AMD chips in the new Surface Laptop 3, there’s a question of performance and compatibility when it comes to powerful apps like Photoshop and Lightroom, but Adobe was on hand at the Surface Event to allay creatives’ fears… sort of.

Adobe promised to deliver Creative Cloud apps to the ARM-powered system—probably around the same time full-powered Photoshop makes it to the ARM-powered iPad Pro—and showed off a Surface Pro X version of its new drawing app Adobe Fresco as a proof of concept. No word on which apps will be coming, or when they will arrive, but it’s clear Microsoft doesn’t want the Surface Pro X to be overly hampered by its CPU, and Adobe seems to agree.

All together, this makes the Surface Pro X look like a tempting alternative to the current iPad Pro for creatives. It runs the Windows 10 operating system, uses replaceable SSD storage, comes with a nifty new stylus for photo editing, and promises to deliver the all-day-battery life and connectivity offered by ARM-powered devices without sacrificing performance the way older ARM-based Surface devices have (remember the Surface RT? Neither do we…).

Once Adobe apps are all available and running (fingers crossed) smoothly, it may be the perfect non-Apple on-location solution. 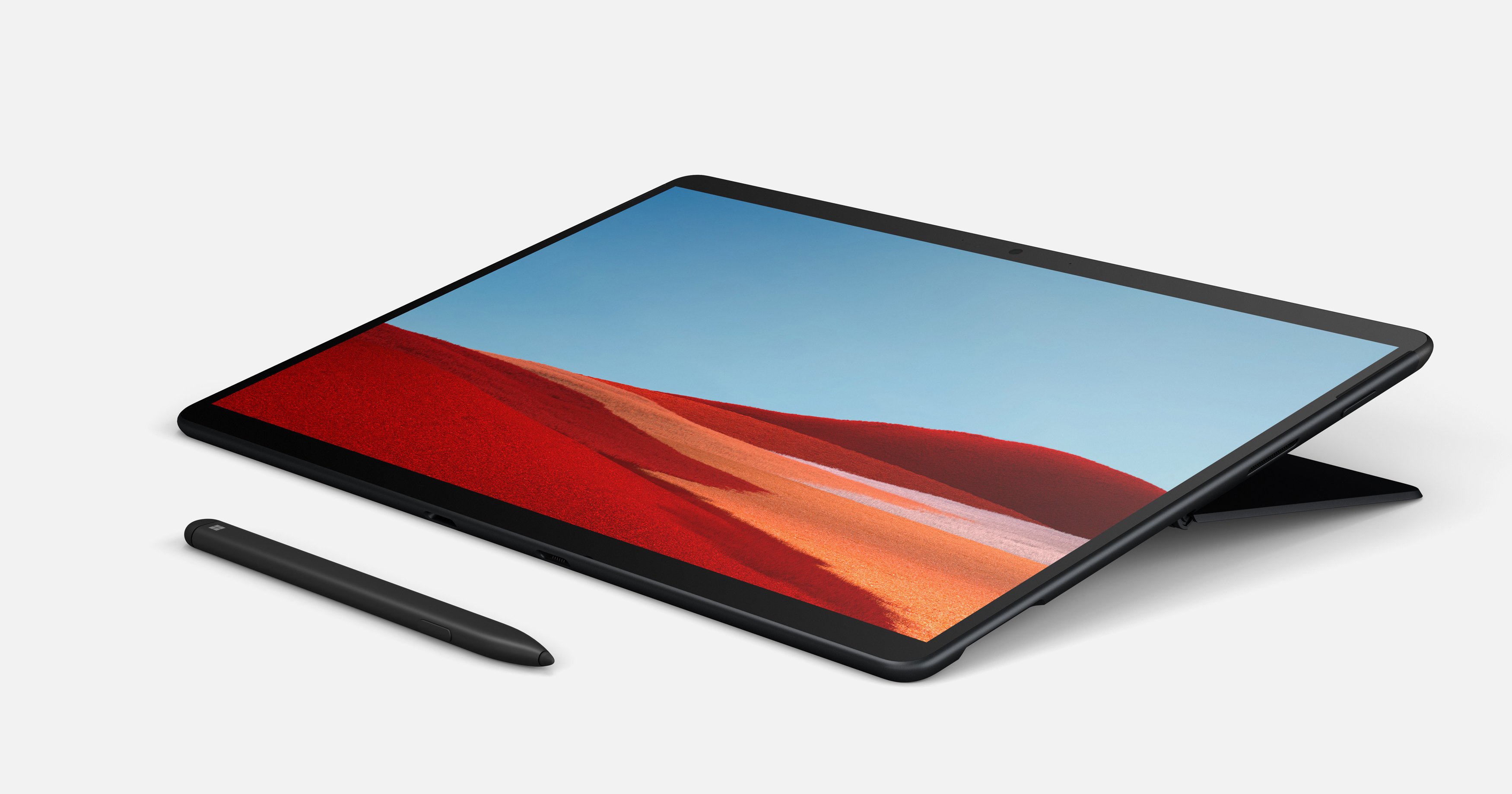 To learn more about the Surface Pro X or any of the other devices Microsoft announced today, visit the Microsoft website. The Surface Pro X is available to pre-order today starting at $1,000 for the base model, and will begin shipping on November 5th, just in time for the holidays.