I’m Martin from the All About Street Photography channel and today I want to analyze an iconic image by photographer Dorothea Lange of a woman named Florence Owens Thompson. It’s known as Migrant Mother.


I am going to take a closer look at the composition as well as at the story behind the photograph.

The picture we’re looking at today is a portrait of Thompson with three kids taken in March of 1936 by Dorothea Lange with her 4×5 Graflex camera. One of the key factors that made the photograph so iconic is when it was taken. Lange had been making portraits in San Francisco since 1919 but the Great Depression in the 1930s made her leave her job to document the effects of the crisis such as homeless and unemployed people standing in the lines for bread. 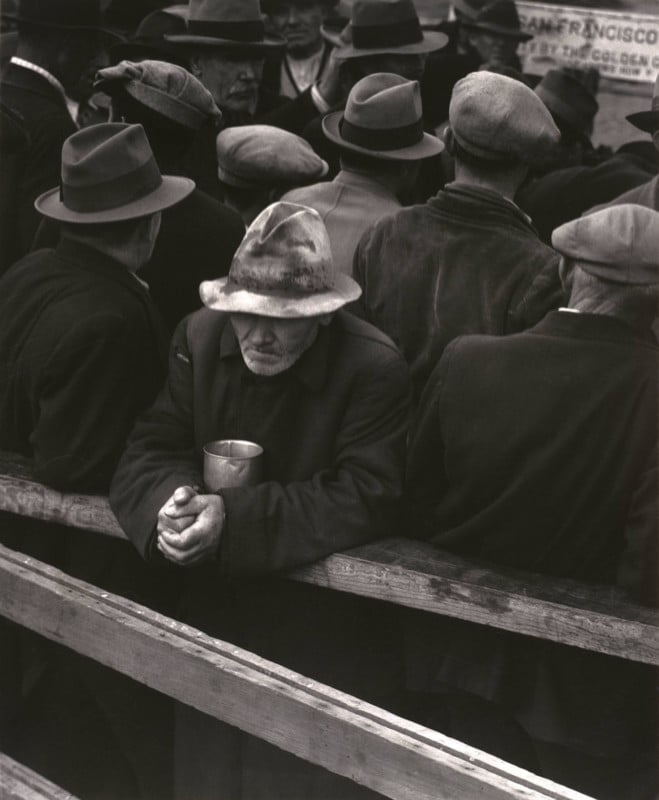 Because of that, she was hired by the Resettlement Administration (later called the Farm Security Administration) that was created to relocate families that were struggling during the time of Great Depression to government land and to try to help people who were hit hardest by the crisis.

Lange was hired by the government to document the workers and conditions they worked in. The project was supposed to bring the political support for government aid.

Lange just finished her work and was on her way back home when she drove by the “Pea-Pickers Camp”. After going another 20 miles, she decided she had to turn back to check out the camp. There she saw a tent, women, and children.

“I saw and approached the hungry and desperate mother in the sparse lean-to tent, as if drawn by a magnet,” she said.

According to Lange, the woman was supposed to be with seven hungry children. Their father was Californian and they were stuck in the camp as they had been forced to sell their tires to buy food. 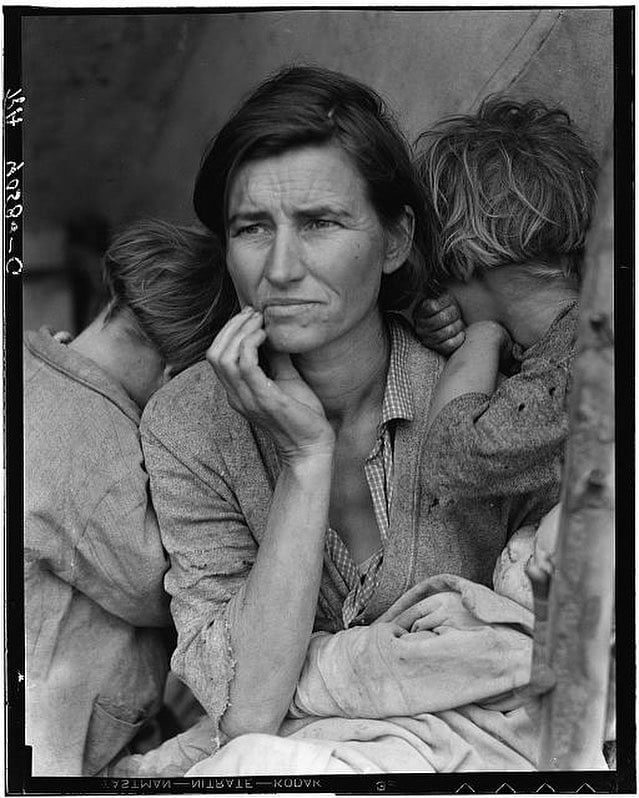 The identity of the woman wasn’t known for almost 40 years. Thompson was born in 1903 in Oklahoma, an Indian territory at that time. At the age of 17, she married Cleo Owens and when his family moved to California, she followed him. In 1931, her husband died from tuberculosis. She was pregnant with her sixth child at that time. Later she met Jim Hill and lived a life of traveling migrant workers in California.

When Dorothea Lange photographed Thompson, they were actually not living at the Pea-Pickers Camp. They just stopped for two days to fix their car. Her son Troy Owens said, “I don’t believe Dorothea Lange was lying, I just think she had one story mixed up with another. Or she was borrowing to fill in what she didn’t have.”

Or we can probably guess she used the story that was more appealing to the public and to the goal she wanted to accomplish.

Lange took 6 pictures and when we look at them the first one that she took is probably the only one that was not staged. After that, she probably talked to them and posed them to make a much better composition.

In the next shot, she decided not to include the older girl as the goal with the photographs was to elicit emotions and sympathy, and having too many children in the frame could be interpreted as poor family planning rather than an unfortunate situation. In the next shot, she also included an empty plate but it was probably too straightforward for expressing the situation. In the last frame, she finally got the image she wanted.

She figured that the mother’s expression is the key to the picture. She even let her point her hand to her face as she also did in her other portraits bring the attention there. 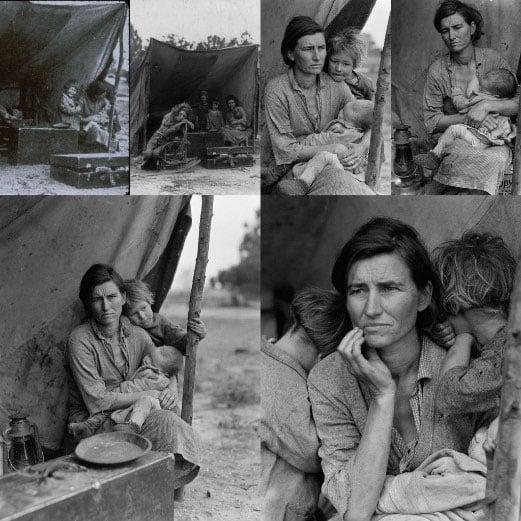 The look on her face can be interpreted in many ways, such as thinking about her uncertain future, but what makes this picture stand out when we compare it to the rest from the series is not what is included in the frame but rather what isn’t. We don’t know where the mother or children are looking or what is or isn’t there. All we see is the expression and the rest of the story is created in our imagination.

Lange even removed the thumb in lower right to “improve” the composition.

The photograph was immediately published in newspapers both locally and nationally in stories about thousands of starving migrants. 20,000 pounds of food was sent to the camp from the federal government, but by then, Thompson and her family already left.

The negatives were almost destroyed when someone at the San Jose Chamber of Commerce threw them in the dumpster, but they were saved and stored for 30 years. They were then were sold at auction for $296,000.

Neither Lange nor Thompson made any money from the piece. As Lange was working for the government, the photos became the property of the government. Nevertheless, the photo still helped them both.

For Dorothea Lange, the picture was very good for her reputation and helped her with her photography career. In 1983, Thompson had a stroke and when her children didn’t have money to cover the medical bills, they used her identity to raise $15,000 in donations. The donations helped with the bills but unfortunately soon after that, Florence Owens Thompson died at the age of 79 in 1983.

In 2006, an elementary school was named for her in Nipomo, California. Migrant Mother became the most iconic image of the 160,000 Dorothea Lange took to document the Great Depression.