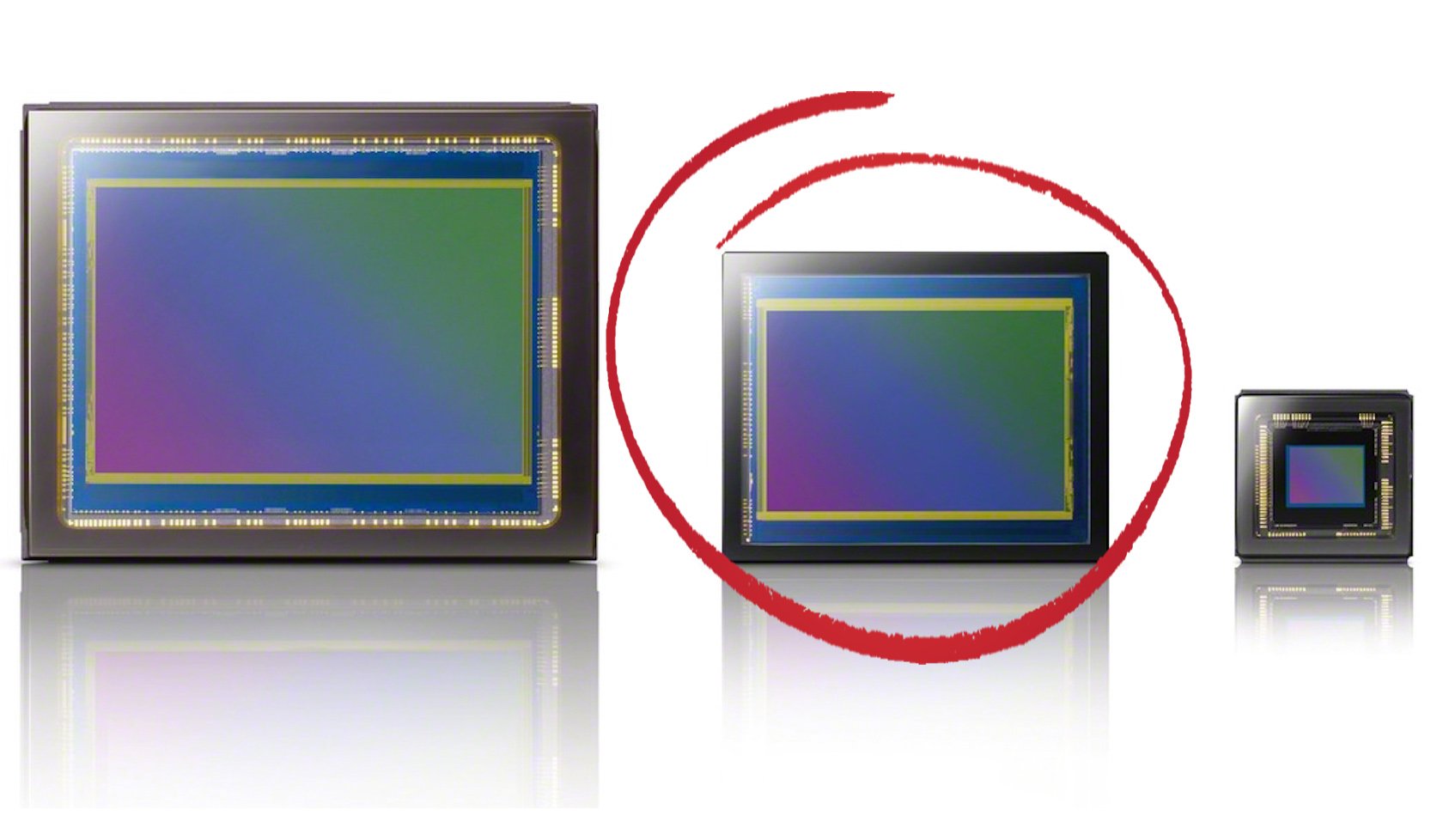 Like it or not, much of the conversation around image quality these days revolves around sensor size. When Sony announced the a7R IV, it boasted image quality that “rivaled medium format.” When people defend Micro Four Thirds, they show off their ultra-portable system and claim the images are “indistinguishable from full-frame.” 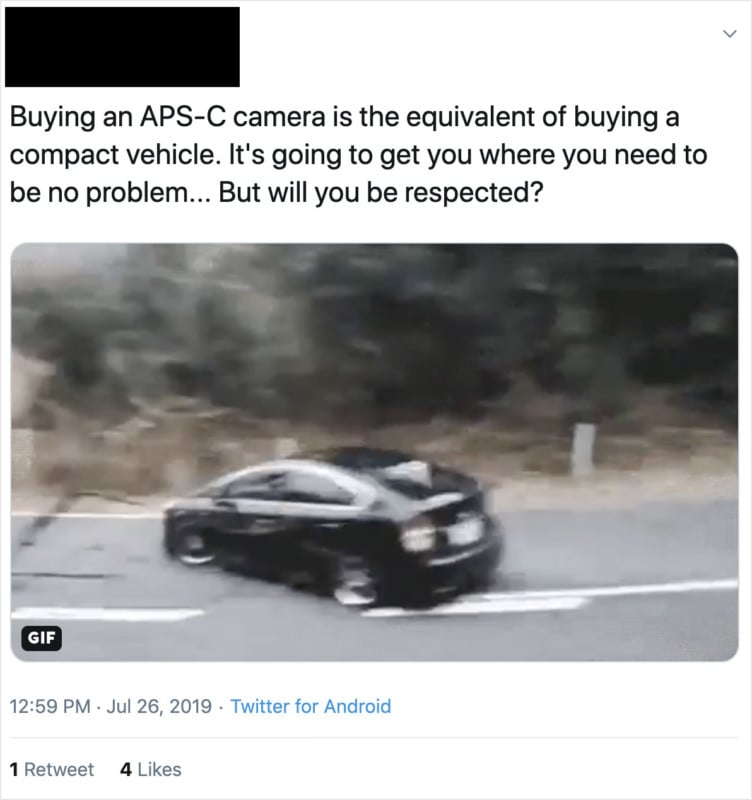 Full-frame has all-but taken over as the professional ‘standard.’ But why? And does it even deserve that title?

I don’t think it does. I don’t think full-frame’s dominance is based on the fact that it sits in some sort of sensor size “sweet spot,” but is instead the result of a historical bias towards the 35mm format. A bias that occasionally serves camera companies, but rarely photographers.

For these kinds of discussions, it’s important that we’re all using the same definitions. So before I go too far and piss off too many people (no chance of that right?…) let’s define “ideal.” For the purposes of this comparison, “ideal” is the best combination of performance, system size and cost, with the performance category worth as much as size and cost combined.

“Weighting” the categories might seem like nitpicking, but I think it’s important to establish some sort of standard from the get-go. I also think it’s how most of us evaluate the merits of various formats intuitively.

The smaller the sensor, the better it will do in the size and cost departments, but at some point the performance trade-off is simply not worth it. Similarly, while we’d all love the best possible performance, most of us are unwilling to go out and buy the latest 150MP medium format system: both the size and cost of that kind of setup are prohibitive. 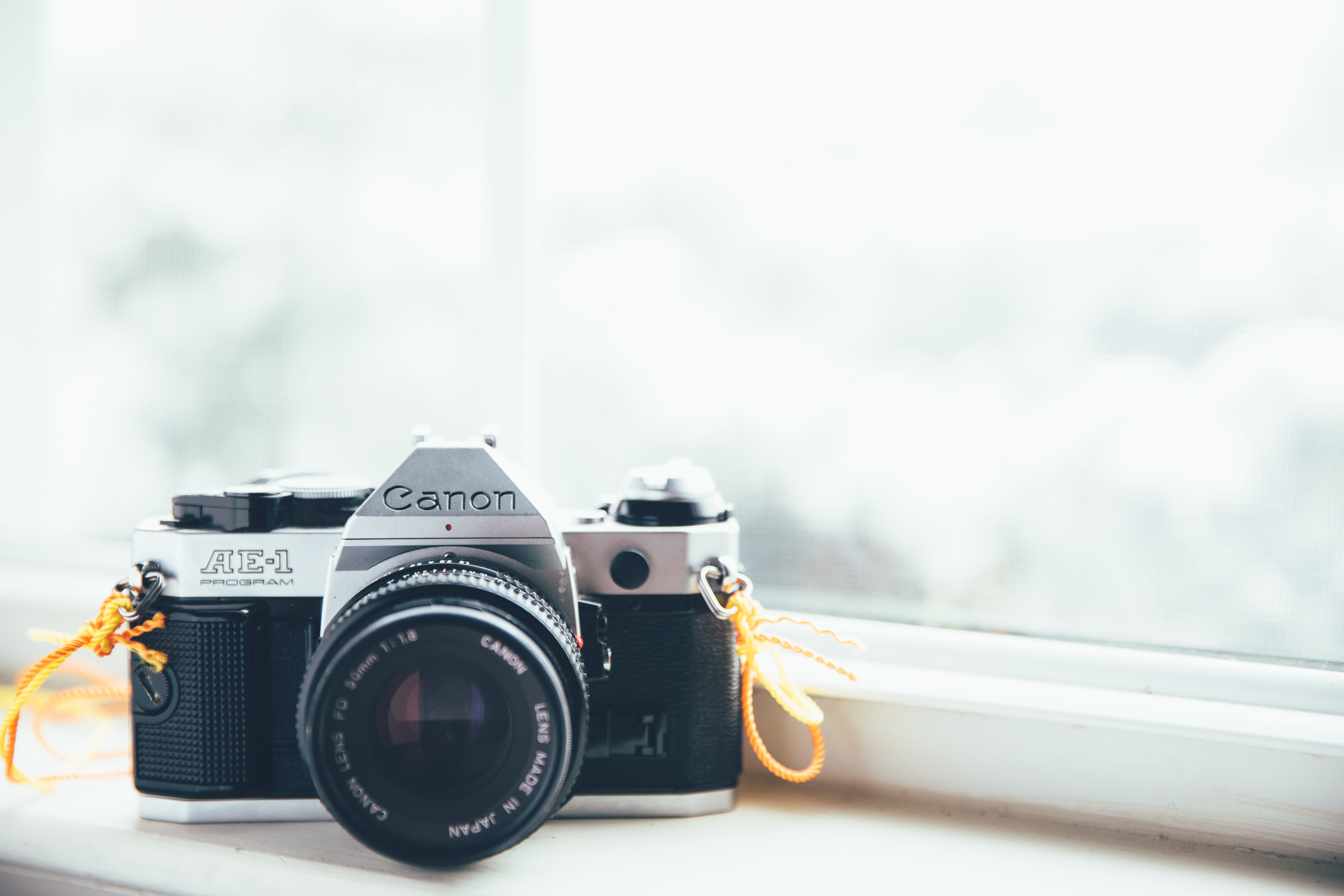 How Full-Frame Became the Standard

As I put together this piece, I reached out to DPReview Technical Editor Richard Butler and PhotonsToPhotos editor Bill Claff to get their take on why full-frame is the widely-referenced standard, and whether or not it even makes sense to crown an “ideal” image sensor.

Each began by sharing their over-arching opinion on the matter.

“You’re absolutely right that sensor format is a balance between size, price and image quality,” said Butler. “I don’t think there is a definitive ‘best’ combination though: everyone will have their own personal threshold for image quality and for the size of gear they’re happy to lug around. To each their own.”

Claff took a more technical tack. “Sensor size (or format) comes down to application,” he told me. “The performance per unit area is the same—silicon is silicon, active pixels are active pixels.”

The dominance of full-frame is primarily historical, as Butler explained to me over email:

Camera brands with a lot of investment already sunk into full-frame (film-era) lenses had a clear motivation to focus their efforts on that format. After all, the high-end users are the ones who buy lenses, so you support the people who’ve bought your legacy lenses and are most likely to buy new ones, while encouraging enthusiasts to ‘upgrade’ to full-frame… regardless of whether that’s the best balance for them.

When I spoke to Claff, he pointed out that “prior to the digital camera era, almost all film cameras that were taken seriously were 35mm or larger.” For stills at least, most smaller format systems were considered “toy” or “bridge” cameras. This attitude carried over into the digital age, and no amount of professional-grade work done with Micro Four Thirds or APS-C system cameras has convinced the masses otherwise.

The financial reasons, once less of a consideration, have become more pressing since the rise of the smartphone means every camera has to prove it’s a “professional-grade” tool that’s worth the hassle of carrying around. As total units shipped goes down, one way to keep revenue stable is to increase the average cost of each unit you ship. Looking at recent CIPA numbers, that’s what we see.

Add in the fact that every company—even behemoths like Sony—have finite resources at their disposal, and it starts to make more sense to use your R&D money on full-frame (or medium format). Butler summed this up well, telling me:

Most camera companies are smaller than you think: they employ a relatively small number of lens designers and have limited budgets. Time spent developing an APS-C lens comes at the cost of being able to develop a full-frame one (which you can sell to APS-C users anyway and convince them they’re being smart, long-term).

At a certain point, under-supporting your mid-tier system can actually help sell your more expensive gear: pitch it as an ‘upgrade path’ and you can get users to buy into the idea that up-selling them (to a format that may not be right for them) is an advantage of your system.

As sensor technology has improved and photographers’ needs have evolved, there’s a good argument to be made that the APS-C format checks more boxes than either full-frame of Micro Four Thirds. This is where I’m more confident stating an opinion than either Butler or Claff. 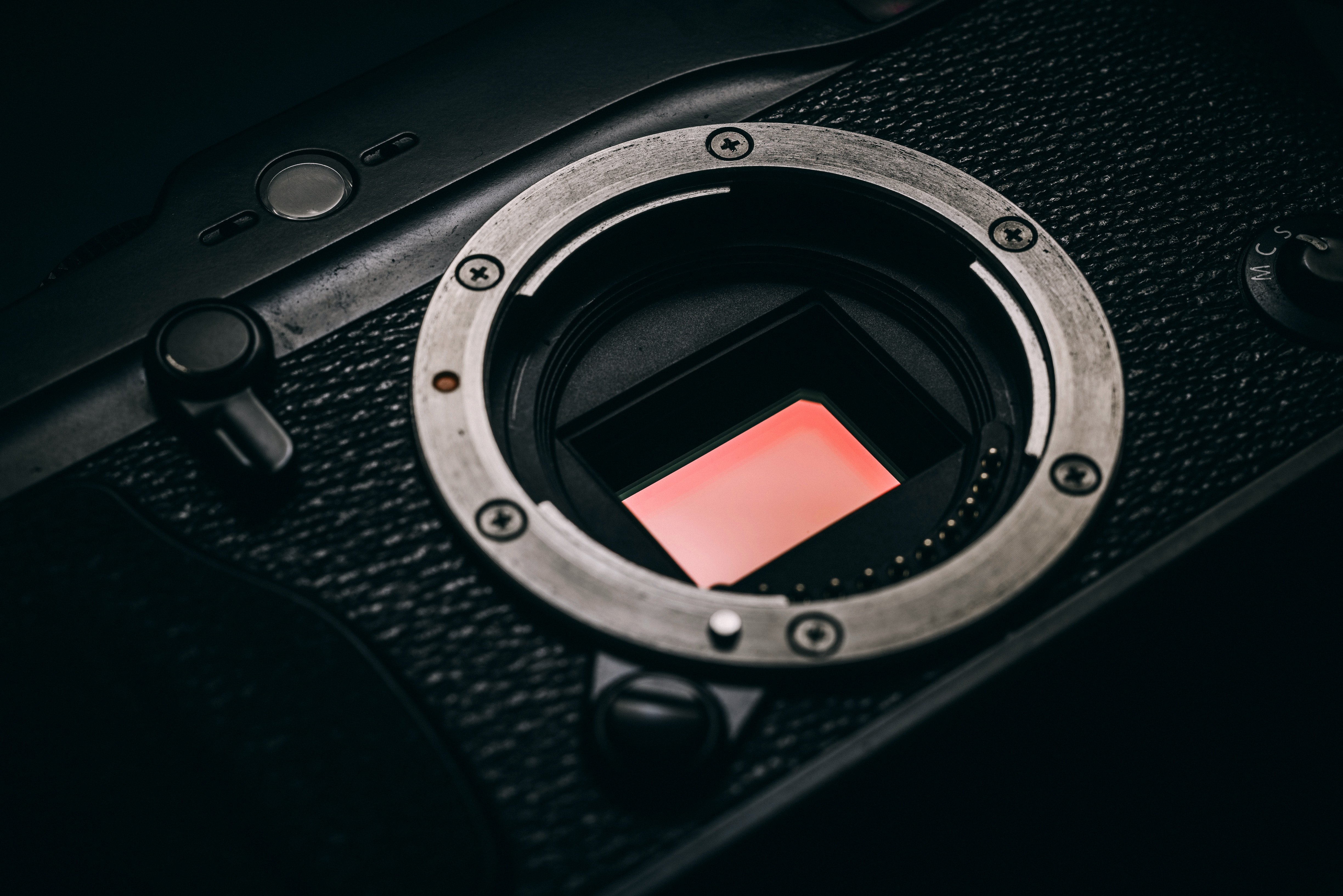 The “right camera/lens/sensor for the right situation” argument sits somewhere between abundantly reasonable and mild cop out. In some situations, yes: the cons of size and weight will never outweigh the benefits of the largest image sensor possible, or visa versa. But I still believe there is a best sensor for “most people” and that this sensor is not full-frame.

This sensor is APS-C, and when it’s supported properly (see: Fujifilm’s X-Series and Sony’s APS-C E-Mount system) the performance to size to cost ratio falls into a sweet spot that neither Micro Four Thirds nor full-frame can match. Many of the features people are asking for from the next crop of full-frame cameras either already exist or are more easily implemented in an APS-C system. A system that won’t cost much more (if any more) than an equivalent MFT camera and only comes with a 1.5x crop.

Compare the Sony a6400 against the full-frame a7 III. The a6400 costs $1,100 less than the a7 III and weighs over half a pound less. Yet, it features the latest Real Time tracking capabilities, 0.02 second focus acquisition, and 11fps continuous shooting in 14-bit RAW (the a7 III can only do 10fps). And this isn’t even the “flagship” a6500 replacement that’s expected later this month, which may come with 4K/60p recording and other features that people are still waiting on from Sony’s full-frame mirrorless cameras.

Or take the Fuji X-T3, which is a bit closer in price and weight to the a7 III, selling for only $500 less and weighing only 0.25lbs less. In the video department, the Fuji can already record 4K/60p 4:2:0 10-bit internally; Sony can’t even do that over HDMI. And it, too, shoots at a faster 11fps in 14-bit RAW, can capture up to 30fps electronically with an additional 1.25x crop, and benefits from a large selection of high-quality, compact lenses designed for APS-C.

Neither Butler nor Claff—both more experienced and technically savvy than me—were willing to make this strong of a statement outright, which probably means I’m stretching here. “Each person’s needs are their own, I don’t believe there is a ‘correct’ answer,” said Butler. “Part of the problem is that the ‘only full-frame is a serious format’ message is so ingrained that it might be putting enthusiasts off the idea of buying good lenses for their APS-C camera, which reduces motivation to develop those lenses. It’s a vicious cycle.”

“If I needed to buy a camera tomorrow, I’d buy an APS-C model,” he continued. “Full-frame is capable of more (shallower depth-of-field, better tonal quality, better low-light performance), but that improvement comes at the cost of size and, well, cost. It’s more than I need. I’d also argue that there are some APS-C models that offer a better balance of stills and video shooting.”

Claff also admitted that APS-C offers a better balance for some shooters, but was against the concept of a “sweet spot” as well. “To me, the message is more ‘you don’t need full-frame, this is why,’” he told me over Skype. “It’s a softer message than APS-C as the ‘sweet spot,’ because that all comes down to your definition of sweet spot.”

So maybe the message is softer. Maybe it is just “you don’t need full-frame.” Maybe this entire discussion about the “ideal” image sensor isn’t meant to reach a definitive conclusion, but act as an antidote to the epidemic of sensor smugness and marketing hyperbole that has swept the industry. 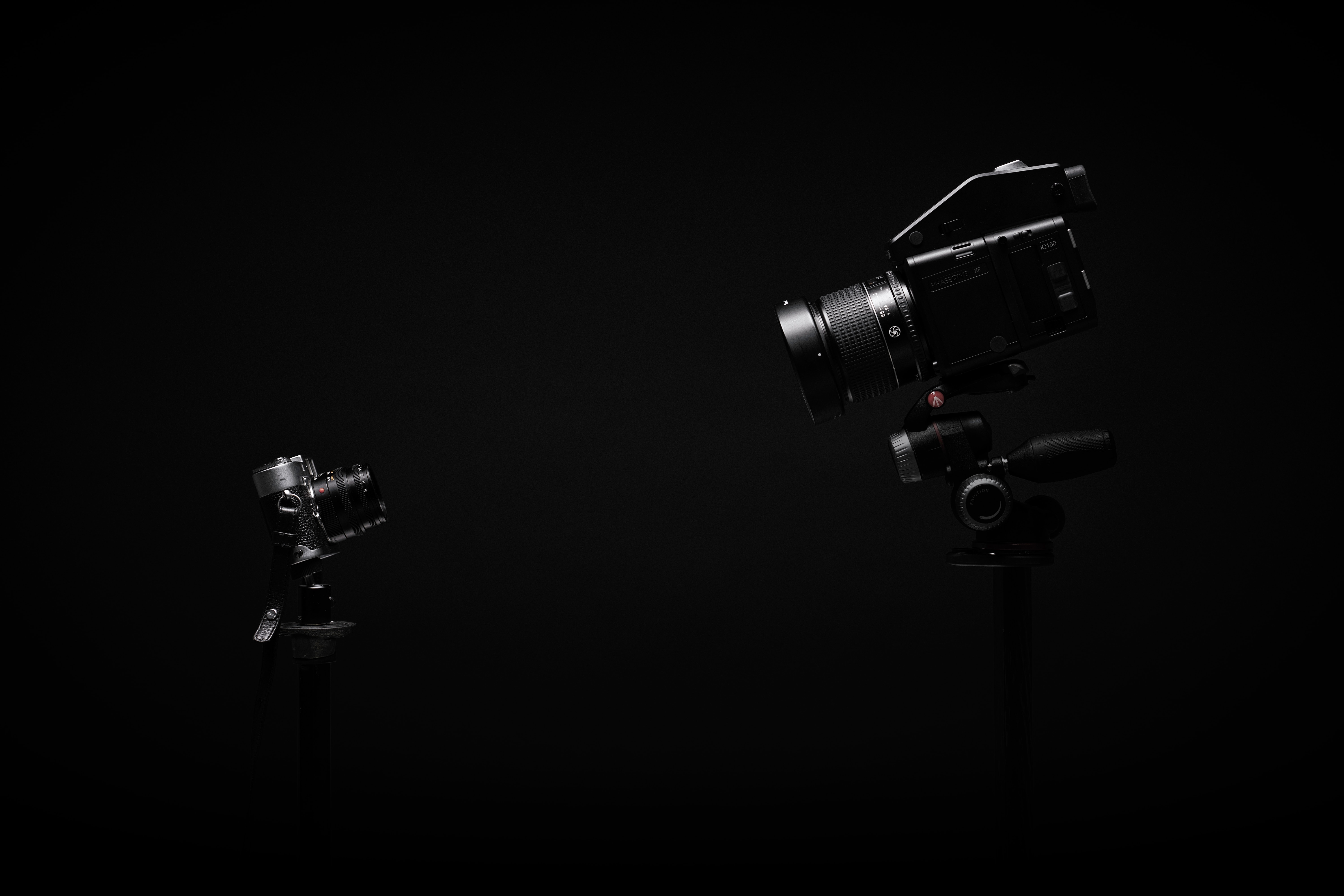 I believe, and you can take me to task about it in the comments, that APS-C offers the best balance for the largest number of people. Stills shooters don’t sacrifice much in way of depth-of-field or low-light capability, while gaining speed and a lighter camera; serious video shooters are already used to shooting with Super 35 sensors, so the crop isn’t a big deal, and they’re getting a B-camera that doesn’t have to sacrifice nearly as much performance to even smaller formats like MFT.

Others will argue passionately that Micro Four Thirds is even better—that any light gathering performance loss is minuscule and more than made up for by speed, size, weight and cost. I disagree, mainly because the 2x crop eliminates a lot of options, and you don’t actually save that much money over comparable APS-C systems.

The one thing that Claff, Butler and I all seemed to agree upon, though, is that chest-thumping about the superiority of your expensive full-frame or medium format camera is less-than-useless. It wastes your breath and encourages others to waste their money; worse yet, it removes any remaining pressure on companies to innovate in the smaller formats, encouraging them to spend all of their development dollars on full-frame and beyond. When was the last time you saw a breakthrough in MFT sensor technology, or got really excited about a new APS-C format lens from one of the big three?

“Ultimately, this is a drum I’ve been banging for some time,” Butler told me. “More choice of well-supported formats is good for everyone.” [emphasis added]

I agree emphatically. And while my opinion on the “ideal” image sensor is certainly debatable, the above statement is not.

Editor’s Note: A huge thank you to Richard Butler and Bill Claff for being willing to share their thoughts on this subject, and for setting me straight when I [more than] occasionally had something completely wrong. Their insight was greatly appreciated.