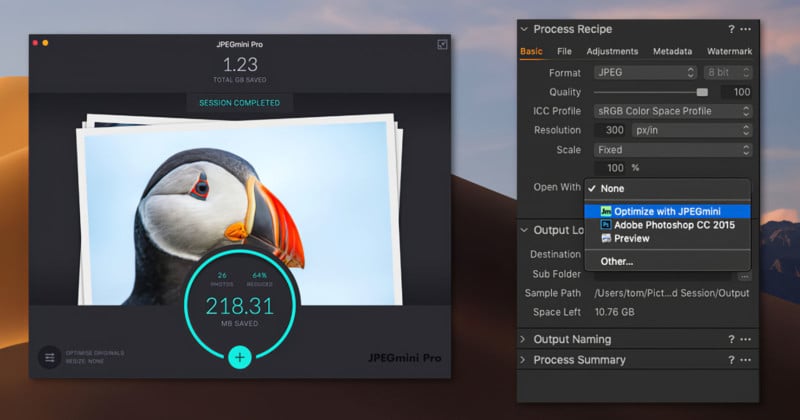 JPEGmini has announced a new plug-in that brings its widely used JPEG file size shrinking technology to Capture One Pro 12.

Phase One released Capture One Pro 12 back in November 2018, opening the door to third-party plug-ins for the first time, and JPEGmini was selected as one of the first software companies to create a plugin for the photo editing software.

Photographers exporting photos from Capture One can now choose to have JPEGmini automatically optimize the JPEGs for the smallest possible file size while retaining the same image quality.

DPReview tested the new plug-in using full-size JPEGs captured with a Canon EOS R and achieved a nearly 75% reduction in file size when exporting from Capture One 12 — 30MB files were shrunk down to 7-8MB without any change in dimensions or loss in apparent image quality.

The new JPEGmini Capture One plugin is bundled within the $89 JPEGmini Pro Suite, which also includes the standalone app (priced at $59 by itself), the Lightroom plug-in, and the Photoshop extension. You can also test out the software before you buy by downloading a free trial.

A Review of Camera Shutter Sounds: Nikon at Top, Leica at Bottom