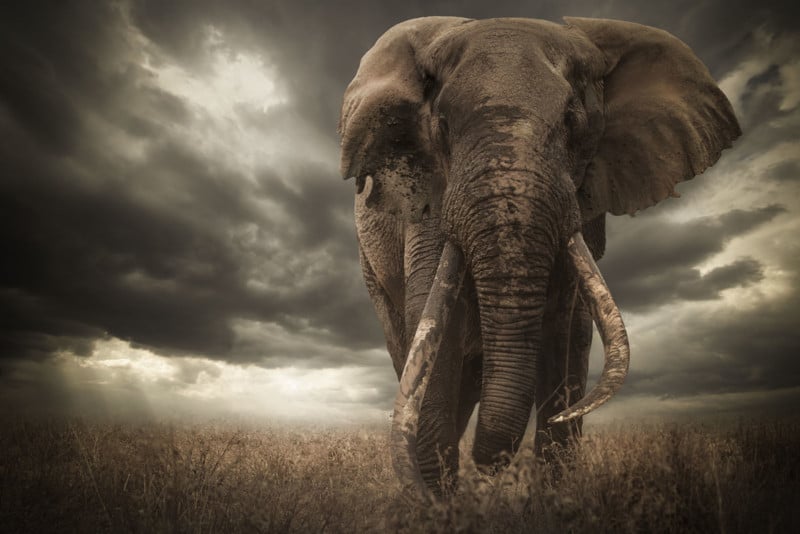 African Geographic has announced that photographer who recently won its 2019 Photographer of the Year award has been disqualified due to photo-manipulation.


The photo, titled “Tim in Amboseli National Park, Kenya” and shot by photographer Björn Persson, shows a known Kenyan elephant named Tim standing in a field with dark clouds in the background.

Although the photo initially won Persson the title of Photographer of the Year, the publication’s “ever-vigilant community members with detailed knowledge of Tim” quickly noticed that something was off with the elephant’s ears.

African Geographic points to these two photos by Selengei Poole-Granli that were also submitted to the contest as ones that accurately show what Tim’s ears look like — notice the damaged areas:

A closer look at Tim’s ears in Persson’s photo shows that the damaged areas seem to have been “healed” (or swapped?):

“The judges did not pick up the error during the judging process,” African Geographic says, “although they did comment on the other obvious post-production work on the image, which they feel is acceptable and which adds a ‘mystical dimension to Tim, a sense of fantasy and legend’.”

After confronting Persson about the discrepancy, the photographer explained that the manipulation occurred accidentally during post-processing.

“Our judges have made the decision to disqualify […] after being made aware that post-production work by the photographer resulted in certain rips/tears in the ears of the elephant not being accurately reflected,” African Geographic says. “The entrant’s explanation, that this error occurred unintentionally while he was cleaning up the image (a common practice amongst photographers), has been accepted by judges – but the decision to disqualify the image stands.”

The contest’s rules state that: “Entries should be a faithful representation of the original scene. Localized adjustments should be used appropriately. The objective is to remain faithful to the original experience, and to never deceive the viewer or misrepresent the reality.”

A new winner of 2019 Photographer of the Year has since been announced by African Geographic.