I always resisted writing artist statements and bios. In school, that part of every assignment or exhibition was the most agonizing. It felt overly simplistic to just describe what the viewer was about to encounter, or why objects or abstract shapes, making my specific image or groups of images, were presented in this way or another.

It seemed that by assigning it a set number of combinations of words and letters, designed to invoke a set of associations or emotions, and qualifying and quantifying it that way, I would be doing a disservice to my work, by not letting it have a clear and unadulterated voice of its own. I never did connect with the majority of artist statements I’ve read, be it on walls of student shows or those of more established institutions. Most of the time, they seemed contrived, often borderline pedantic. Far removed from the subject matter in the actual show, they often seemed to be paying more service to the ego of the photographer rather than to photographs shown, or Photography itself.

Meanwhile, I kept shooting. I wanted to be a ‘photographer’ since I was very young, influenced by seeing my grandfather and his Zenit 18 on all family outings, and how much joy it gave him to grab the camera in crucial times and quickly change position for better light and composition, or sometimes ask us to pose in just the right way, or sometimes just to point it at things and directions I didn’t yet understand, and to get locked into whatever he must have seen in that little window. He passed on before I was old enough to learn much, but right before I turned 12, my classmate showed me how to develop and print black and white film, and at that point, I knew that the darkroom constant was lodged in my heart and mind forever. So, I had to keep shooting.

My family moved to the US when I was 16, and prior to photography, spurred on by inertia of overachieving drive that most immigrants seeking a better life in America have, I started college studying chemistry, in order to follow my parents’ professional footsteps. But I always kept shooting. It was something about the light, the act of vision, the process of solidifying fleeting images seen by my eye while on the journey of life wherever it took me, and the experience of seeing my thoughts and feelings about various subject translated onto a page in form of shades and shapes in a visual manner with light and chemistry. I needed to keep shooting.

With passage of time and accumulation of different work in a variety of photographic mediums, in my mind started to congeal a more cohesive view of what it is that most excites me about the photographic branch of the arts, and its myriad of processes, and why it was that I can’t seem to stop shooting. A common thread started to come more and more into critical focus. It started to become apparent that no matter where I found myself, no matter what I was going through in life during each moment, I always found instances where Light and Shadow beautifully accented certain subjects, and it was Photography’s innate ability to record this interplay of shades upon tangible matter by use of no less tangible chemistry, that relentlessly inspired me to give life to each individual image, regardless of particular content. Light became content. Light became the focus.

I once asked myself ‘why not?’, and switched my college major from a reliable track of laboratory research chemist and dedicating my education to the direction leading along an often-uncertain and eroded, overgrown and yet congested, path of paying the bills with images. This is the same question I like to ask myself often while pondering my next image. Why not point my lens in this direction? Why not try it this way? I find myself enjoying absorbing light reflected from a thistle in a field just as much as it brings me joy to see it strike any face in a compelling or complimentary way.

I am reverend and grateful for the perfection of the photographic medium, which allows for a seemingly infinite amount of both precision and variation in capturing reality in all manners it appears to me. Without taking this into account, my work may seem fragmented to an outside glance, but if one considers that the inspiration stemming from Light Itself as a uniting foundational thread, the fragments then make an almost Surat-like single vision from the sum of all parts. My individual images, projects, bodies of work, are all akin to separate letters, words, sentences, paragraphs, chapters, and tomes of the same story or song.

I feel compelled to dedicate this last part of this formulation of the impetus behind my work, to addressing why I always choose to work in analog photographic mediums. The world around us is a tangible place. Molecules and atoms, which make up all that is visible to us now, switch states and places in one grand infinite cycle. During some parts of this flow of energy, some of those molecules are briefly arranged in forms that reflect Light. At that point, it becomes possible for Photography, processed through the filter of each practitioner’s vision and skill level, to manifest the action of distilling this combination of light and matter to concrete compositions we call photographs.

For me, it seems logical to make my images from essentially the same particles which I photograph, real physical atoms vs. more ephemeral electrical fields. I’m attracted and intrigued by the continuity of this physical property in my images, and the incredulous variety of way in which I can act to physically arrange a set of molecules on a page to reflect a moment in reality as it was experienced by my eye and envisioned by my mind. I am also heartened by the knowledge that the Light reflecting from those molecules will reach the eyes of all future viewers in the same manner as it reaches my eyes now, and that the weight of my prints or plates will remain the same each time someone picks them up to feel their heft and presence.

For the past 6 years, I’ve worked almost exclusively with direct positive techniques of wet plate collodion tintypes and ambrotypes, and am now gravitating more and more toward daguerreotype technique, which is irresistibly noble in its process and unparalleled in visual appearance and sharpness. A direct positive is a truly unique creation/experience with almost no chance for post-production manipulation, making it a technically demanding way to work, particularly when one has a set pre-visualization in mind and is set on actually having their vision to be communicated precisely.

A direct positive exists singularly, like the moment during which all elements came together for its making, and there’s only one set of molecules bearing that particular visual semblance. Because of that, I feel a deeper connection to each plate (of metal, or combination, of metals or glass) with an image which I placed upon it.

After varnishing a tintype or sealing a daguerreotype, I am done with a given particular personal challenge of capturing beautifully my experience as closely to my vision of it as I could and, as the moment itself starts to recede to the annals of memory, while molecules upon the plate hold it fixed as intended for at least a few centuries, I can be open to meeting the next inspirational challenge as quickly as possible. After all, it’s fun to keep shooting.

P.S. Here’s a 4×5 tintype made the night after I typed up the above formulation, because a blog post without an image is only about as good as photography without a camera: 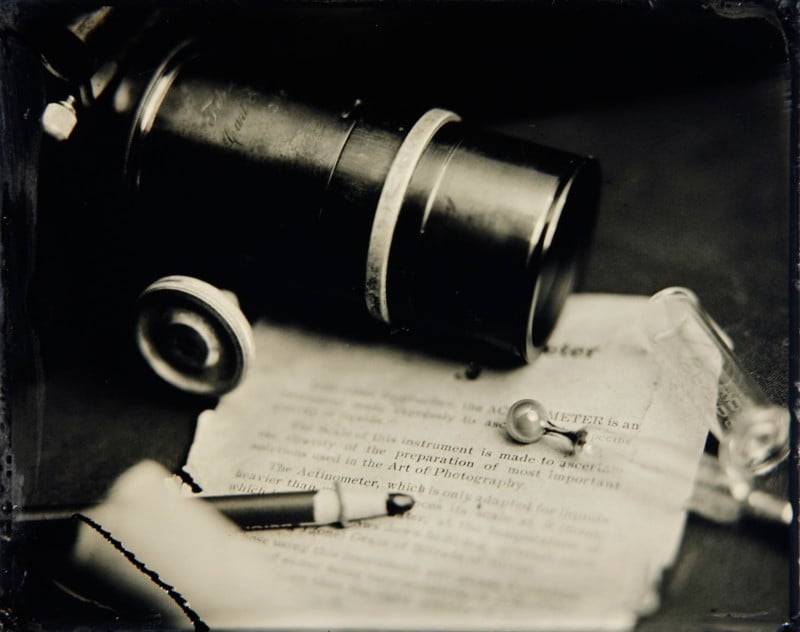