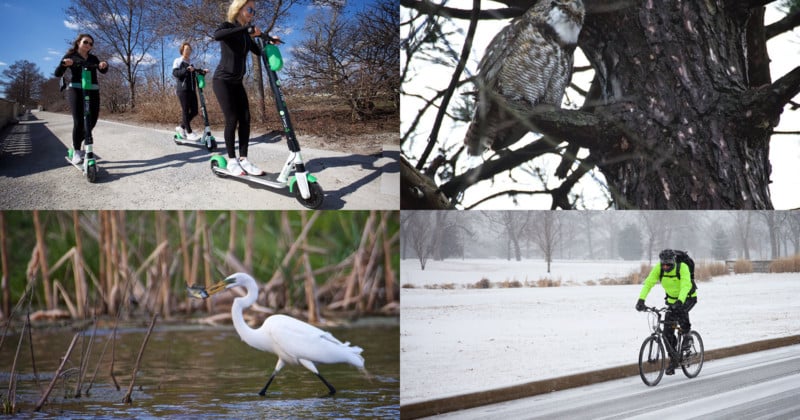 Easter Sunday in Saint Louis was the ideal day for a 365 project. The sky was dialed to maximum blue, and the cirrus and cumulus clouds danced together in celestial harmony, floating lazily above our park’s decked out crabapple, cherry, redbud, dogwood, and other flowering trees.

In a shady glade by a slow-moving stream, wildflowers bloomed, and all through the park couples young and old sat, walked, ran, cycled and drove, not a few on the electric scooters that have become the new favorites of the millennial crowd.

Children ran and played with sticks, dogs proudly paraded their people, and around Jefferson Lake, the optimists tossed their state-of-the-art bait into the water and dreamed of catching 10-pound catfish. Turtles warmed themselves under a benevolent sun, tree rats leaped from branch to branch in elm, oak and maple trees decked in the golden green of nature’s new leaves, and the birds soared, swooped and gorged themselves at spring’s bountiful table.

The egrets patrolled the water’s edges, robins, starlings, and sparrows greeted at every opportunity, and the red-winged blackbirds denounced us all as intruders and warned us about trespassing on their property. Hawks circled overhead, looking for neighbors to eat.

In February, however, things were not so idyllic. There were one or two days when the mercury rose into the “habitable” range, but by and large, it was cold and wet, with near-record precipitation turning America’s premier urban park into near swamp conditions. The zoo actually closed one day due to the ubiquity of ice. Puddles deep enough to have their own fish and waterfowl populations proliferated and I wore my muck boots almost every day, in addition to my standard winter gear.

The short of it is, that a great deal of trouble is involved in spending part of every single day of the year exploring, photographing and writing about one place, particularly if that place is as large and varied as Saint Louis’ Forest Park. At slightly over 2 square miles, Forest Park is 50% larger than New York’s Central Park.

Being situated by one of the great North American migratory routes (the Mississippi Flyway), the park, with its forests, savannas and many water features, attracts a lot of birds and other wildlife. Today I spy a pied-billed grebe in Jefferson Lake, but he spies me as well and disappears under the water’s surface. The grebes join us each spring, along with other migratory waterfowl, expanding our year-round population of mallards, wood ducks, and Canada geese.

I first came up with the idea for such a 365 day project 11 years ago and decided Forest Park would be a great place to carry it out because it is close to my house (less than one mile), hosts a lot of events (races, festivals, etc), has many wild areas that support a wide variety of wildlife, and contains museums, sporting venues, a municipal theater and one of the world’s best zoos. So I started on December 31st, 2008, walking, cycling and in general exploring the 1,300 or so acres of park.

I walked the perimeter at least once (about 6 miles), and in a serendipitous sort of fashion zig-zagged across the park, wandering almost every square foot of the park, including the golf courses, institutions and interstate highway that cuts across its southern boundary (the highway was closed that year for reconstruction). I crawled under low-hanging trees, I canoed the navigable waterways and I mounted my camera on a 15-foot extendable painters pole to peer into bird’s nests. It was a challenge to my photographic past (shooting weddings, portraits, and events for 20 years) and a great way of connecting with and meeting new people.

The project also helped generate publicity, landing me television and radio interviews, an editorial in the late, great Popular Photography, and a front page listing on the BBC web site for 3 days. It also gave me great respect for nature photographers, new knowledge of and appreciation for birds, and a lot of great new friends. One of my friends who followed the project throughout the year told me, “Your photos keep getting better and better.” Yes!

P.S. You can follow this year’s project here. My 2009 Forest Park project is available here.

About the author: Edward Crim, longtime photographer and teacher, is the director of the St. Louis Photo Authority and the primary photo instructor. The opinions expressed in this article are solely those of the author. Prior to devoting himself full time to the STLPA’s mission of building community through photography, Edward devoted over 5 years to developing and teaching photography programs for St. Louis photo institutions. He is also a freelance event and studio photographer for the last 15 years and managed a full-service photo lab for 12 years before that. You can find more of his work on his website. This article was also published here.