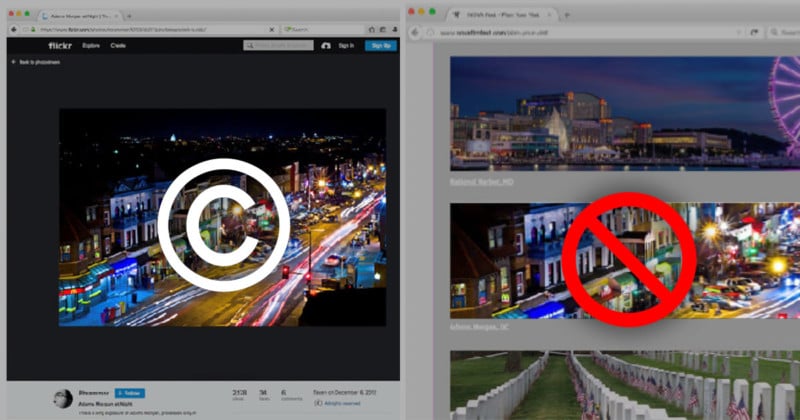 In July of 2018, a Virginia federal court sparked an uproar among photographers by ruling that finding a photo on the Internet and using it without permission on a commercial website can be fair use. Good news: an appeals court reversed the decision today in a big win for photographers (and other creatives).


The copyright battle started when photographer Russell Brammer found a cropped version of a photo he had captured in Washington, D.C. used on the website of the Northern Virginia Film Festival on a page of “things to do” in the D.C. area.

After Brammer sued the festival’s organizer, Violent Hues Productions, for copyright infringement, the company responded by claiming fair use.

In a decision that shocked observers, District Judge Claude M. Hilton of the Eastern District of Virginia ruled that it was fair use because he determined the use was transformative, non-commercial, in good faith, factual (rather than creative), of a previously published work, only a crop, and harmless to Brammer’s potential market.

Brammer appealed, and today the US Court of Appeal for the 4th Circuit reversed the ruling and sent it back to the federal trial court.

“After examining the four [fair use] factors, we conclude that none weighs in favor of Violent Hues,” writes Circuit Judge Diana Gribbon Motz, who authored the decision. “Considering these factors together, it is clear that the copying here fails the ‘ultimate test’ of fair use: Violent Hues’ online display of Brammer’s Photo does not serve the interest of copyright law. […]

“We reach our conclusion with the recognition that the Internet has made copying as easy as a few clicks of a button and that much of this copying serves copyright’s objectives. Many social media platforms like Twitter, Facebook, and Instagram are specifically designed for the participatory ‘sharing’ — or copying — of content. We express no opinion as to whether such sharing constitutes fair use. We note, however, that Violent Hues’ use is not of this kind. […]

So just in case you were confused by the original ruling in 2018: no, you CAN’T use a photo without permission simply because it was published on the Internet.

“We are very pleased to see this decision overturning one of the most egregious fair use rulings that many of us who defend copyright can remember,” NPPA General Counsel Mickey H. Osterreicher tells PetaPixel. “We hope that this will be seen as a clear message that it is much better and far cheaper to seek permission and license images than it is to steal them.”