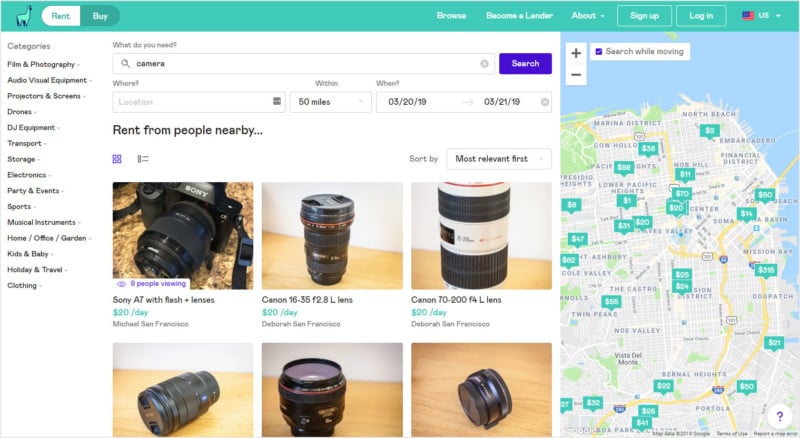 I use Fat Llama to loan out some of my photography gear when not in use, and I’ve been very happy with the extra beer money. Well… up until last week, that is, as my camera kit was stolen!

Let’s rewind a bit and go through exactly what happened, how I was dealt with by the Fat Llama team, and my thoughts on how to better protect yourself if you use Fat Llama or something similar.

Two weeks ago (28th of February), I received a message through Fat Llama from a girl asking if they could borrow my Canon 5D Mark IV and 24-70mm lens. The girl had no reviews or rating and had just registered on the platform. I didn’t think too much of it as I have loaned out my gear to people who had no reviews in the past.

After a bit of back and forth asking her what she will be using the kit for (a college project was the reason), I approved her request. I even gave her my Anker portable charger to charge the batteries on the go as she said she needed the kit urgently.

So, about an hour and a half later, a smartly dressed girl was at my door ready to take receipt of my photography gear. I asked her to pop inside and check the kit out, as I do with all borrowers. Upon reflection, she seemed a little hesitant but came into my living room and I showed her everything — I even offered her my backpack to hold all of the equipment, which she graciously accepted. As she was leaving, she said she’d back around the same time the next day to bring it back. A few hours later, she messaged me via Fat Llama and asked if 5pm would be ok instead. No problem, I replied.

So, the following day came and my girlfriend and I were working from my home. We had plans in the evening, so I messaged the borrower around 4:50pm (10 minutes before she was to arrive) to see if she was close by, again through the Fat llama website. This is when I received no reply and started getting worried.

Now, when a lender approves a borrower’s request, we both get access to each other’s mobile number. Getting no reply through Fat Llama, I sent a message to her, asking what time she will be over. She actually replied and said she was on her way. Fantastic stuff. Stress levels started dropping! 20 minutes later, I sent her another text message and she replied again, stating that she was almost at my house. Fine, I thought, maybe she was telling me a white lie and wasn’t as close as she said previously.

By 6pm, an hour after she said she was close by and still hadn’t turned up, I felt sick knowing I had been scammed. I heard no more from this girl, sending more futile text messages, calling and leaving voicemails. I actually felt like I was going to throw up.

Shortly after, my girlfriend and I walked down to the shops, mainly for me to get some fresh air and my mind off of what just happened. I was also secretly hoping I would get a message back from this girl with a plausible story about why she went cold and that she would be over to me shortly. Obviously, it didn’t happen and while roaming the aisles, I contacted Fat Llama support on my phone and told them what happened.

Sunday morning, I received an email from a lady called Jeevika from the claims department. She introduced herself and promised that she would call me the following day to go over what happened on the phone.

Monday morning came and Jeevika did indeed call me and asked for my side of the events. She was very professional and emphatic to my unfortunate situation. We probably chatted for about 20 minutes and also discussed the fact that there was more than one person involved. Then she emailed me after our chat with a link to fill in a ‘Lender Non Return Claim Form’ and asked me to submit a police report.

Once I gathered and submitted all of this information (not fun, as I had to dig through my phone, take screenshots and find products!) and filed the police report, I had a swift email back from Jeevika, informing me that she would be reviewing this information over the next 1-2 working days to make sure my claim was strong, before submitting it to the claims department.

At this point, I started to calm down a tad, feeling looked after and that I was in good hands with their lender guarantee. My only issue was that I hadn’t taken pre-rental photos/videos of my gear (don’t ask me why, but as I hadn’t had any issues on the site so far, I just got lazy). I felt that they would use this as a reason not to pay out.

Over the next few days, I was contacted by Jeevika and another claims person named Alex (who was also just as awesome) who asked for some more information from me. As I hadn’t taken pre-rental evidence, I needed to send over timestamped screenshots/photos of the stolen items. Some, I hadn’t taken photos of in years, so I really had to dig through my photo gallery!

Eventually, I emailed over my timestamped photos and Alex got back to me with the cost of the claim she was submitting, which was the original price list I had paid for all of the stolen items — over 5 grand! Again, that sickness came back…

Nearly 2 weeks after I started the arduous journey of trying to get my gear replaced, I received an email from the claims department.

This is how the first part of the email was worded… I almost had a heart attack.

After fully reading the email, I found out that all of my items would be replaced! Way to take a few years off my life, Fat Llama.

The reason why my claim was “rejected” was because I had no pre-rental evidence. I didn’t care, as I didn’t want the money, just my equipment. I thought it was pretty great that Fat Llama would also replace items that weren’t even in my listing such as my Anker charger and backpack! Absolutely amazing.

Verification: Now, I can’t remember the exact verification procedure I went through when I signed up but I would suggest making it mandatory for all new people signing up to send a video of themselves in of about 10 – 20 seconds, talking a bit about themselves, how they found Fat Lama, and what they will be using the site for (anything that gets them on video talking).

Messaging platform checks: Check if the user’s mobile number are set up on Whatsapp/Viber/Line etc as another precaution. If they don’t have one of these accounts, that’s a warning sign in my book and what happened to me, when I did check after the fact.

Mobile network check: I’m not so sure this is possible with privacy issues etc but it would be great if they could somehow query if a mobile phone number is new, with the mobile network. Some kind of API would be amazing to get info about when that number was issued etc.

Full profile photos: I also would want to see all profile pictures with the person’s face in full view. At the moment, you can upload any avatar.

What I will be doing differently going forward

So while I unfortunately became a victim to theft, I am very happy with the outcome of my claim and I will still use Fat Llama to loan out equipment, albeit I will be way more vigilant going forward. Their lender guarantee worked well for me and I am thankful for Jeevika and Alex for their responsiveness and constant communication.

About the author: Keith Donegan is a photographer based in London, England. The opinions expressed in this article are solely those of the author. You can find more of Donegan’s work and writing on his website and Twitter. This article was also published here.

RNC Use of Photo Without Permission on Political Mailer is Fair Use: Judge

Why Size Matters: Lens Compression at 400mm in Landscape Photography