Sacramento-based astrophotography enthusiast Andrew McCarthy extracted color data from 150,000 photos of the moon to create this enhanced photo showing all the different splashes of color on the surface left by impacts of different minerals.

“The color was already in that picture, hidden behind the glare of the moon’s albedo, and represents the mineral content of our moon,” McCarthy writes. “While my previous images showed you the detail you could see if your eyes were sharper, this one shows you what the moon could look like if our eyes and brain were much more sensitive to color. 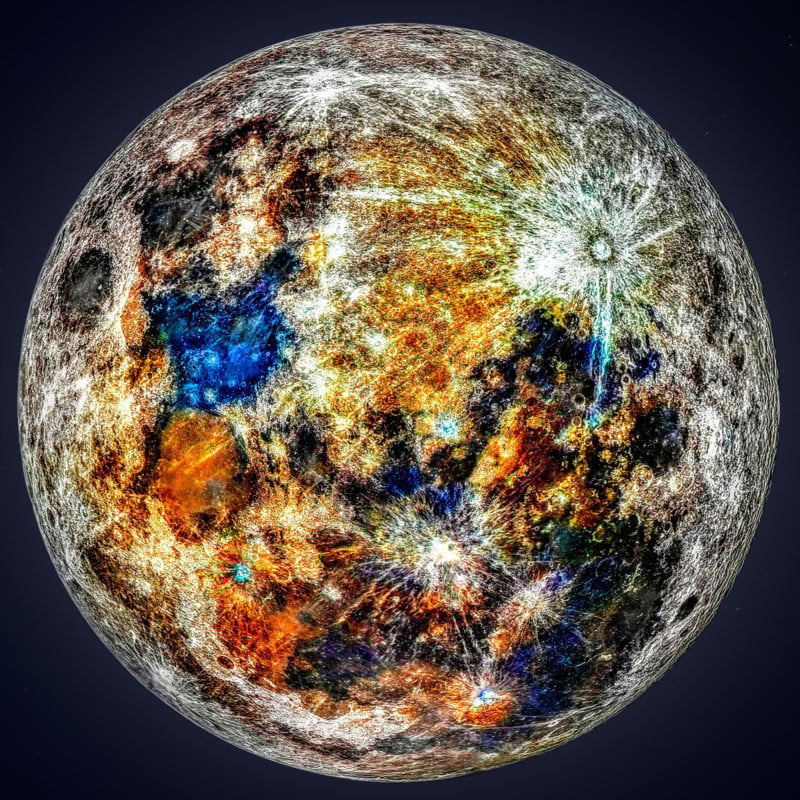 In the course of capturing a huge number of moon images for the ultra-high-res image, McCarthy gathered enough data to create additional visualizations like this one.

“Because I took so many shots to average out the blurring caused by atmospheric turbulence, as well as to eliminate noise captured by the camera sensor, the accuracy of the subtle coloration of the moon was incredibly high, allowing me to apply saturation and contrast adjustments to create this moonstrosity,” the photographer says.

After shooting 142,000 images with the ZWO, 2,000 with the Sony, and hundreds more with a 300mmm lens, McCarthy stacked and stitched the images in AutoStakkert! and Photoshop, respectively. And to turn the color “up to 11”, McCarthy adjusted saturation, contrast, and sharpening.

“Much of it was just tinkering until I got the look I wanted,” he says.

You can find more of McCarthy’s work on his Instagram and his Linktree. He previously also shot this viral Solar System family portrait from his own backyard.

Lessons in Fearlessness from Morocco

A Pro Photographer’s Review of the Leica M10-D