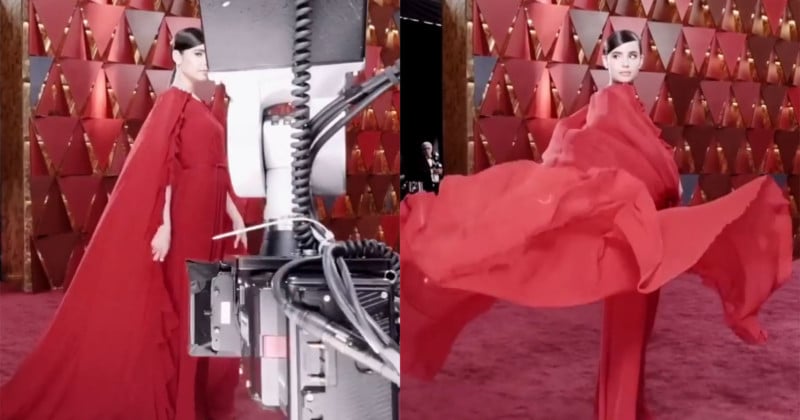 
The man directing the Glambot at each of the shows is Canadian filmmaker and photographer Cole Walliser. The Glambot itself is well-known Bolt high-speed cinebot by Camera Control holding up a Phantom 4K Flex camera with a Leica Summilux lens mounted on it.

Here’s an epic shot of singer and actress Sofia Carson that Walliser captured with the Glambot at the 2018 Academy Awards (you can find more shots from this show here):

Whenever a celebrity shows up at the booth, Walliser only has about 30 seconds to explain the Glambot and 1-2 minutes total for the whole shoot. The robot itself has about 12 pre-programmed moves that Walliser chooses from based on the subject’s position, attire, and movement.

“The pressure is on because you only ever have ONE take, and this is a dangerous rig that can knock you out,” Walliser writes. “I get good at explaining things, but sometimes the environment is so frenetic you can’t really hear me or focus.”

Here’s a 5-minute behind-the-scenes video Walliser shared last year showing how he ran the Glambot at the Oscars:

Here are a couple of behind-the-scenes looks at shots Walliser made during the Oscars this past weekend of J-Lo and Lady Gaga:

How to do a GlamBOT in 30 seconds or less!! Hahha. I don’t think I cut any time out of this with J-Lo. I was caught a bit by surprise by her (didn’t know she was coming) so we just jumped right in. Shot it fast, she didn’t really do much but when you’re @jlo do you have to? I also love @arod in the background being like “DAAAAYUUMMM SHE 🔥” 😂😂 I mean … he’s not wrong. #jlo #glambot #theoscars

Gaga The Queen! I had to start these of with @ladygaga on this one. She was the last person we shot and she easily set herself apart with the walk. Nobody has ever walked into their mark for the GlamBOT mostly because focus is so shallow when you shoot 1000fps it’s hard to hit when talent stands still, but she NAILED IT. So happy to see her and shoot her again and let’s not overlook how she called me her friend when she sees me. 🤖@cameracontrol 👔: @saisumancouture ♥️♥️♥️ #gagaglambot #gagathequeen #newbffs

And here are some of the best Glambot shots from the night:

“It’s quite a unique process that’s half live show, half beauty spot directing, have movement coaching, nothing else I work on a director comes close,” Walliser writes. “We shot about 140 takes at the Oscars this year and a lot make it into broadcast.”