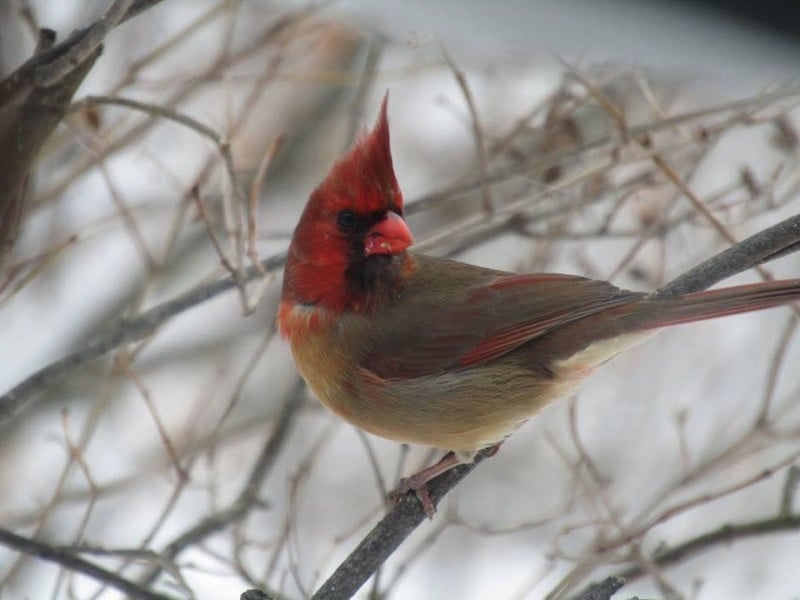 Bird watcher Shirley Caldwell was looking out at the bird feeders in her backyard when the Erie, Pennsylvania, resident spotted an unusual bird: it was a half-male, half-female cardinal.

National Geographic writes that the bird’s anomaly is known as a bilateral gynandromorph, in which half of a creature’s body is male and the other half is female. Gynandromorphs are likely found in all species of birds, but they’re much easier to spot in species where the males and females have distinctly different appearances (something known as sexual dimorphism). Here’s Nat Geo’s biological explanation of how these “male/female chimeras” come to be:

Gynandromorphy like that in this cardinal occurs when a female egg cell develops with two nuclei—one with a Z and one with a W—and it’s “double fertilized” by two Z-carrying sperm.

The chimeric individual then develops with half of its body as a male ZZ and the other half as a female ZW. If you were to examine a cell from the bright red male side, it would have cells with ZZ chromosomes. If you looked at a cell from the left, it would have cells with ZW chromosomes. This phenomenon happens in birds, many insects, and crustaceans.

Here’s a short video Caldwell captured of the same bird:

In 2018, a photographer in Alabama captured a “one-in-a-million” photo of a yellow cardinal.

(via Nat Geo via Laughing Squid)

Dear Partisan Journalists: Don’t Drag Us Photographers Down With You