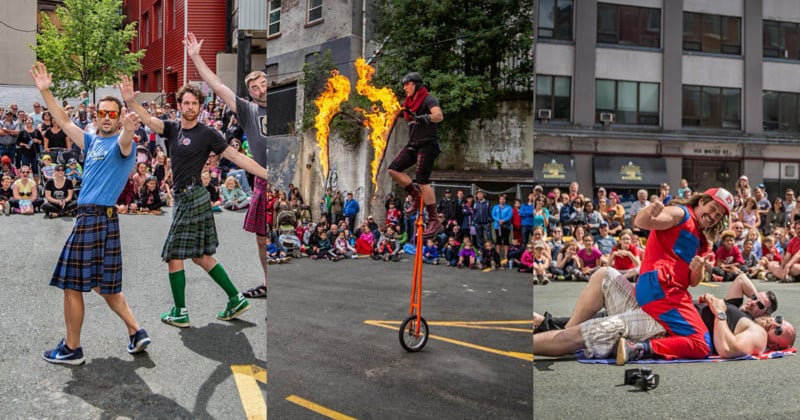 I’m a photographer in St John’s, Newfoundland, Canada, and I’ve been shooting the St John’s International Busker Festival for the last 6 years. It’s not a paid gig — I do it for the fun and the challenge and to support the event.

I’ve made some friends there and have seen some of the best street performers in the world, and it’s a free event and I like that. An event the whole community can enjoy. I should add that these performers are not paid to perform and rely on donations. A five or ten dollar donation will help keep them performing and entertaining us!

Let There be Light, I Mean Background

Photographing an outdoor event can come with many options and some limitations. Usually, there are many angles to choose from but the lighting is pretty much out of your control. The sun is where it is, the clouds (I’d rather have flat lighting) are what they are; the show must go on. That being said if the sun is not where you’d like and if you are in a downtown urban area you may find light bouncing off the side of a building you can use.

As I became more familiar with this event I began to move around to try to find the angles I liked best. I was surprised when I realized that the lighting wasn’t the most important consideration. I found I was moving around to get a good angle, a good background. Funny because you know how they say photography is all about the light! Well not necessarily, not all about the light anyway.

Is that an Environmental Portrait?

I often shoot behind the performers looking back at the crowd — it’s like being backstage at a theater. I think having the audience in the photo adds to the atmosphere and throwing them out of focus allows the viewer to focus on the main act while also maintaining a sense of place. Is this an environmental portrait? I think so but I didn’t realize that until I started writing this piece!

Another reason I like this angle is that I’m trying to minimize distractions in the frame. I don’t like having utility poles, parking meters, or commercial signage in the background and do what I can to avoid those things. This certainly makes for a cleaner and more focused picture.

I remember at one event one of the buskers said to me “wouldn’t you get better photos our there?” while pointing towards the crowd? I must have said something like “I’m good here, thanks”. At the time I would have been shooting up against a blank building wall if I was in the crowd. I’d been through all that, I knew the angles I liked best.

One example is the photo of Pancho Sandoval. Here I am sitting behind the show opposite the audience with my back up against the side of a building. We are in a parking lot and I’m surrounded on three sides by 4 and 5 story buildings. The street and also the open sky is to my left. The audience is thrown out of focus just enough to be able to get a sense of their captivated faces while keeping the main focus on the performer.

Another example is the photo of Seb Whipits. If I were to shoot from the audience perspective in this photo I would be shooting with the blank side of a building as the backdrop. Also, I wanted to be able to see his flaming whips clearly so having a darker background relative to the whips helps the flames stand out more.

Because the performers will most often be facing the audience shooting from behind or even adjacent to the performance will make it more difficult capturing the performers face. Sometimes a profile photo works or maybe a shot of them facing the crowd can be good. Timing is important here.

There are other technical aspects to consider here. A shallow depth-of-field to give your subject some separation from the background and focal length of the lens. I like using a short telephoto when I can, maybe an 85mm.

One important consideration here is to avoid getting a big patch of sky in the frame as the highlights created can be a major distraction. This is much easier to do with a telephoto lens. Exposure setting is also important and during daytime shooting outdoors there should be no problem getting a fast enough shutter speed to freeze the action in front of you and a wide aperture for a shallow DOF goes hand-in-hand here.

Background is so important no matter what you shoot. We’re all seen the portraits where a pole sticks out of someone’s head or a tree branch seems to go in one ear and out the other. Many of us will look at these and get a good idea on the experience level of the photographer based on this and similar faux pas and it can make for a good laugh.

After years of doing this, the organizers and some of the buskers know who I am and they will often play it up for me during their performance. Makes for a great laugh all around.

In the photo of the amazing Martika Daniels, having the flames juxtaposed against a darker background helps to give greater impact to the act.

About the author: Brian Carey is a photographer based in St John’s, Newoundland, Canada. The opinions expressed in this article are solely those of the author. You can find more of Carey’s work on his website, Facebook, and Twitter.