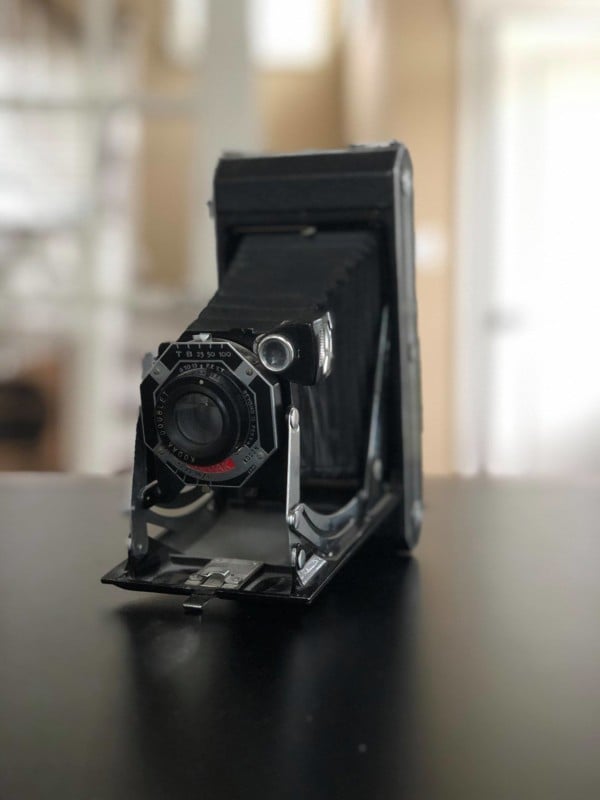 In my mom’s home office, there has been a really old camera sitting on her bookshelf since I can remember. No one ever touched it. I don’t remember a time where it has ever moved.

When we moved back to the states this past summer, we stayed with my parents for a week or so. I have no idea what I was doing, but one morning it caught my eye. When I ask my mom if I could have it (cheeky, I know) and she told me it was dad’s. So, off to look for dad I go!

Now he’s in his usual spot and when I asked him he immediately said no. My balloon may have been a little deflated but it really wasn’t a huge letdown. Especially when my mother told me that it belonged to my dad’s father. It made a lot more sense.

My grandfather was a man whom I never had the opportunity to meet. A man who immigrated to the US from Ireland nearly a century ago. We don’t have a lot of pictures of him hanging around the house. He passed away when my father was really young, so it’s not someone we really heard much about growing up. But I found it cool that for all these years we had kept a little piece of him, in the form of a camera sitting on the shelf.

My dad gave me that camera right before we left for our new home.

Fast forward a few months and I was Skyping with my fabulous friend Andy, who owns Andy Dane Photography back in England. We were chatting about old cameras and I pulled my little Kodak off the shelf to show him. I want to treat the leather and fix the bellows on it so it will close again.

As I was turning it for the camera, I said to him “I don’t even know how to open this thing”, and right then, found the slide release and the back popped open and, “Oh my WHAT!? There’s film in there!!!” I immediately closed it back as fast as I could. Right then and there I started my hunt for a studio with a darkroom in it.

It didn’t take me too much time to discover a photography studio that had a darkroom. It is a bit of a drive from me, but I figure this is well worth it! I went to PRINT Wednesday and met with owners John and Kyoto. It’s a charming shop in a part of Newport News called Hilton Village, a historic village modeled after a British village (so right up my aisle). John and I spent the better part of 4 hours in the darkroom with the film that has been in my Kodak SIX-16 camera for who knows how long. 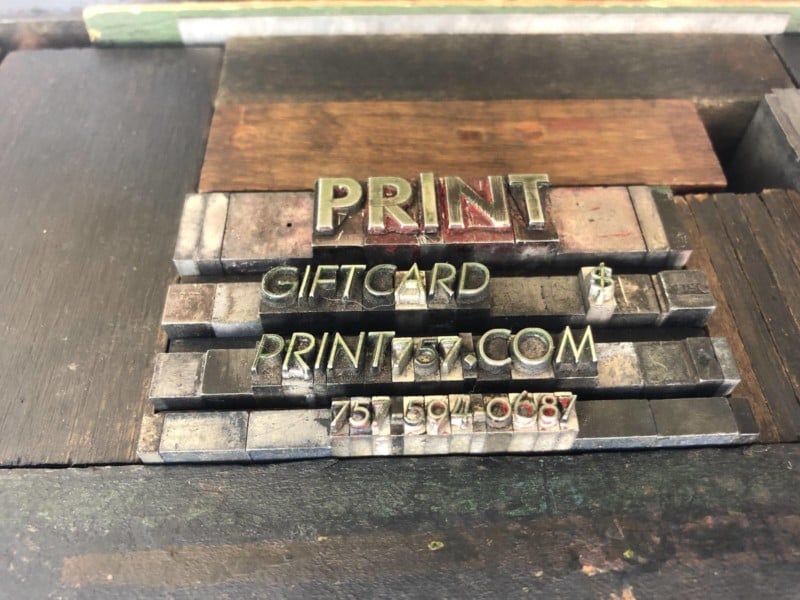 We spent some time trying to get the film out of the camera, in the pitch black, as somehow part of it got caught up in the bellows (the accordion). Then trying to find a spool that the film would fit on, trying to figure out the appropriate developing time and so on and so forth and we came out with this. 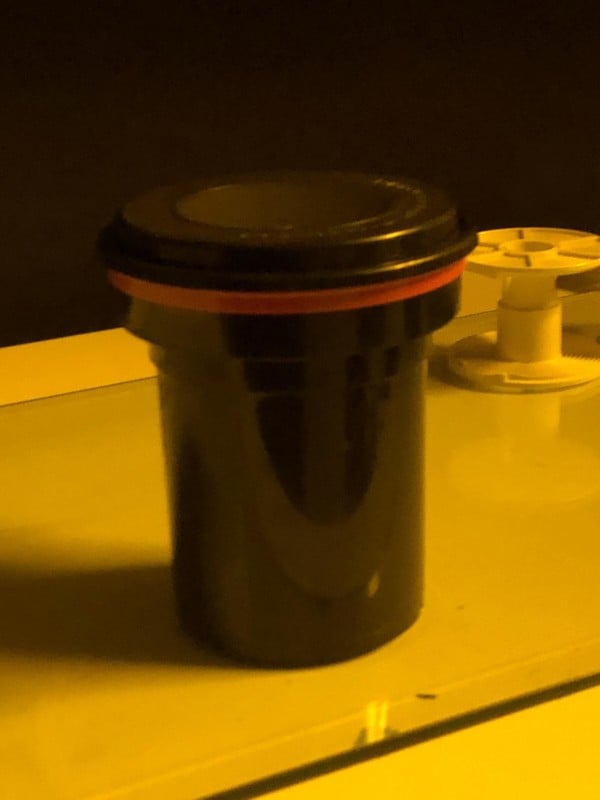 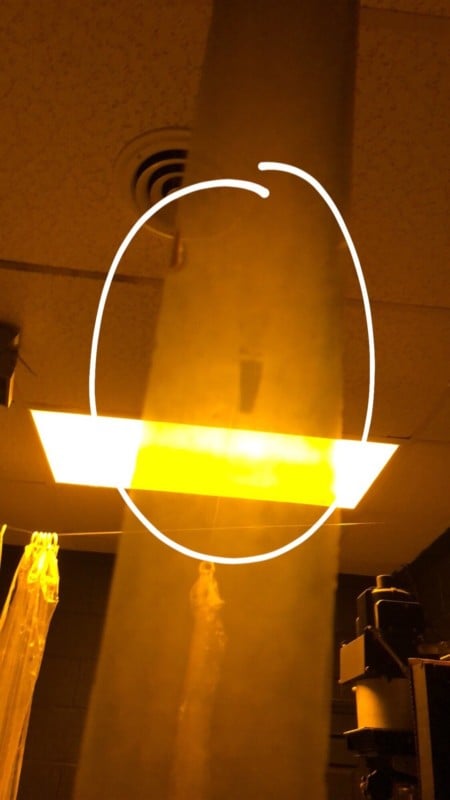 Are you freaking out right now? Because I sure am! Very clearly plain as day you can make out a shirt and bowtie. and there is a man. We have a man!

Looking a little more closely, there looks to be a set of stairs or a building! I am completely nerding out. Could this be a picture of my grandfather that my family has never seen?? Looking closely at the film, we can see on a separate shot there is another face, and a hand on another, and where the film is a bit torn, we make out a picket fence, a building and what looks to be a nun! (Who may just be my 82-year-old cousin!) 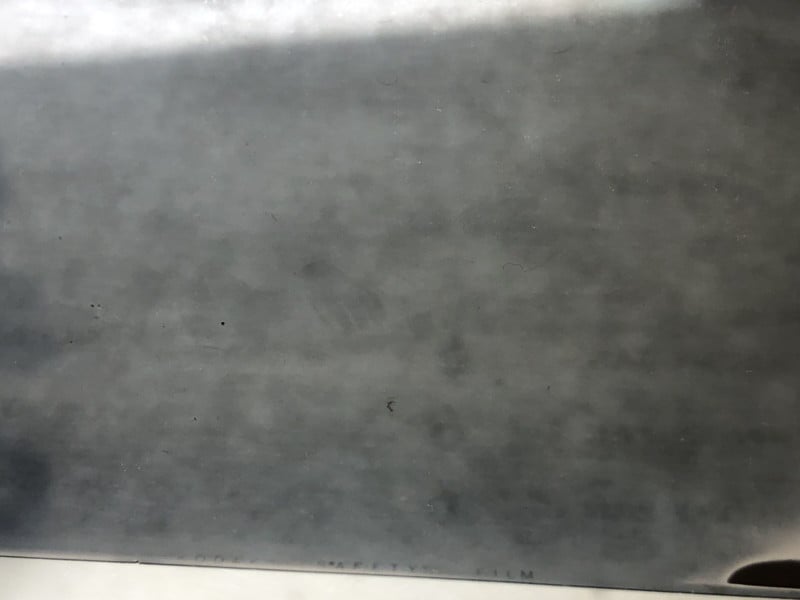 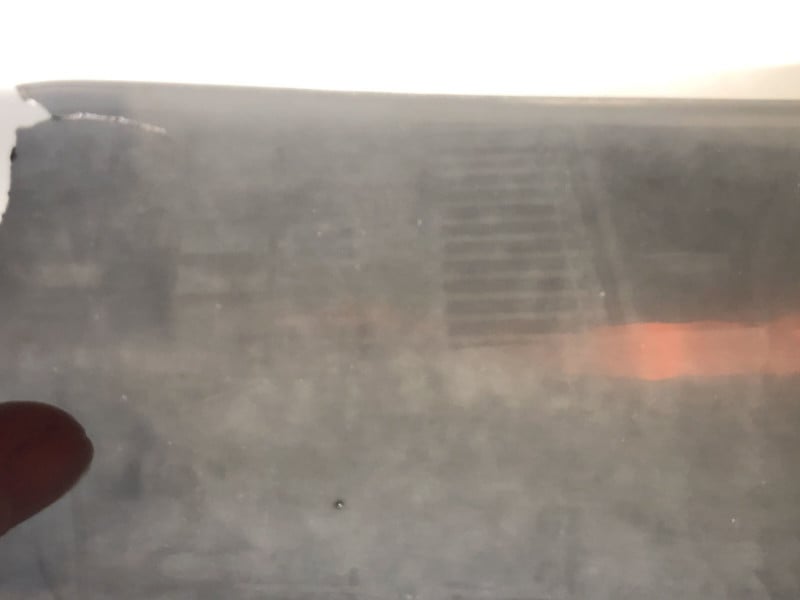 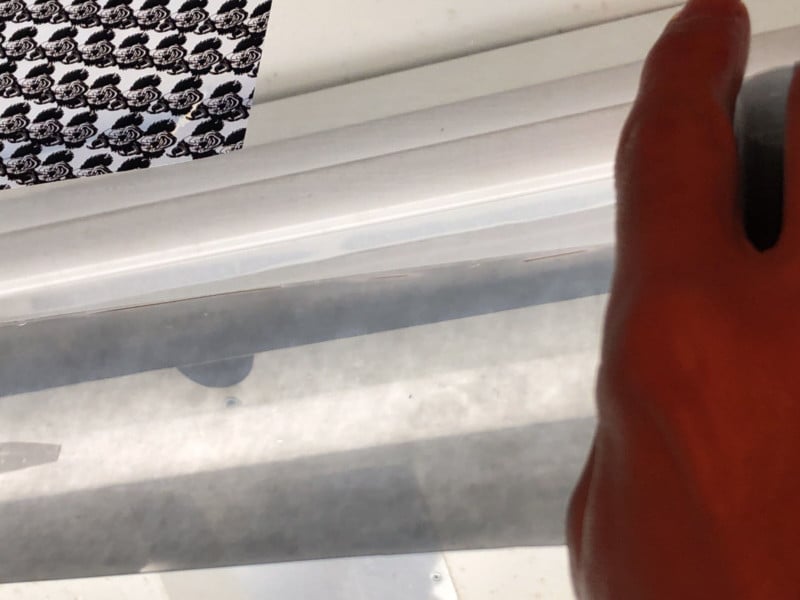 Now admittedly I get easily excited. So when John and I put the negatives under the light to expose the film onto paper my little excite-o-meter skyrocketed! The fact that this film — this picture — is possibly 50, 60, maybe even 70 years old is incredible. Add on that I actually opened the back of the camera with the film still in it blows my mind. 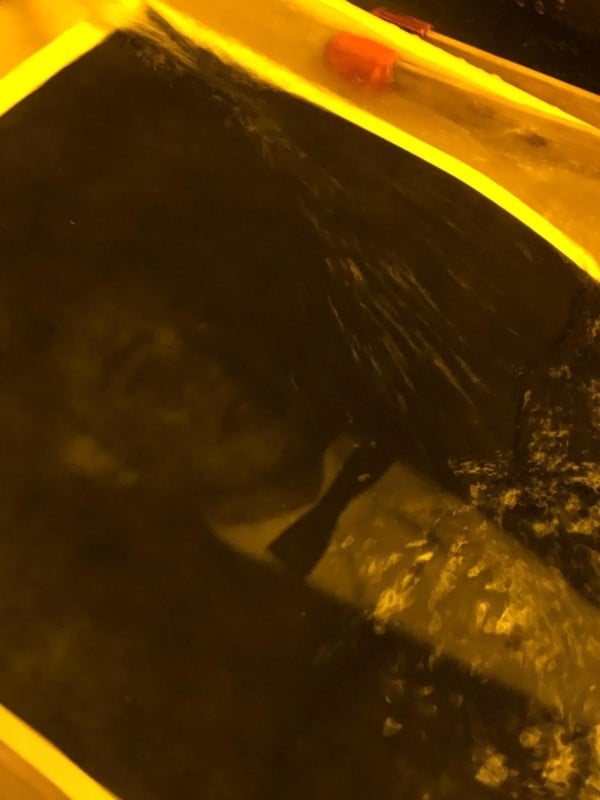 We focus on the picture of the young boy. When we develop the first shot, I was moved, almost to a point of tears when the picture appears on the paper. We tried a few more times to get a better shot. We did a little split toning with high and low contrast lenses, and we adjusted our exposure time a bit. In the end, we came out with a beautiful image of a young man who bears a similar resemblance to a young Elvis.

It could be my grandfather – or maybe one of his brothers, but I really don’t know. I could have spent several more hours just playing around with the images, but the day is getting long and I need to get back to my home. I thank John and get my things together to make the trip back across the tunnel. Before I pull out of the lot, I send I picture to my dad to ask him about it! 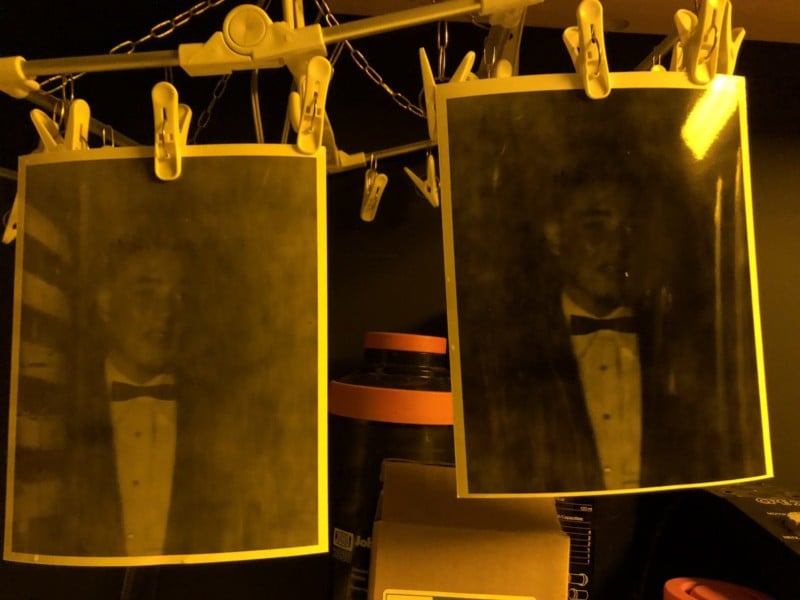 I can’t contain my excitement. So I call right away and Dad gets the picture while I’m on the phone with him, and I ask him, “Who is that? Is that your dad? Or his brothers?” (Remember, I don’t have a lot of visual images of my grandfather so I don’t have the best visual of what he looks like.)

Dad laughs and says, “You know what that is??? That’s not my dad, that Jackie Garry – he lived above us.” Enter confusion… “Why would you have a picture of the boy who lived above you – in a tux?” To which he replied, “He took Ann to her prom!” Ann is his sister, my aunt.

So now I know who this mystery man is. It’s not my grandfather, which is somewhat disappointing… but he is somebody’s grandfather, and maybe with some help, we can unite this picture with his family. I’m sure that will be a long road, but it will be worth having a go at it!

This week I plan to go to Norfolk to a studio that scans negatives from film and is able to get more detail of the images from the scan. I am hoping to see if I can get a picture of the woman, as well as the nun!

P.S. I couldn’t be more grateful to John and Kyoto at Print for allowing me to intrude on their shop and spend their afternoon on this little adventure with me. I am excited to visit Print again in the future! If you are into film photography – they have workshops fairly often and are so helpful!

About the author: Meredith Hodge is a lifestyle family photographer based in Chesapeake, Virginia. The opinions expressed in this article are solely those of the author. You can find more of her work on her website. Hodge’s work has been featured in Vogue Italia, as well as several other local publications in the UK. This article was also published here.