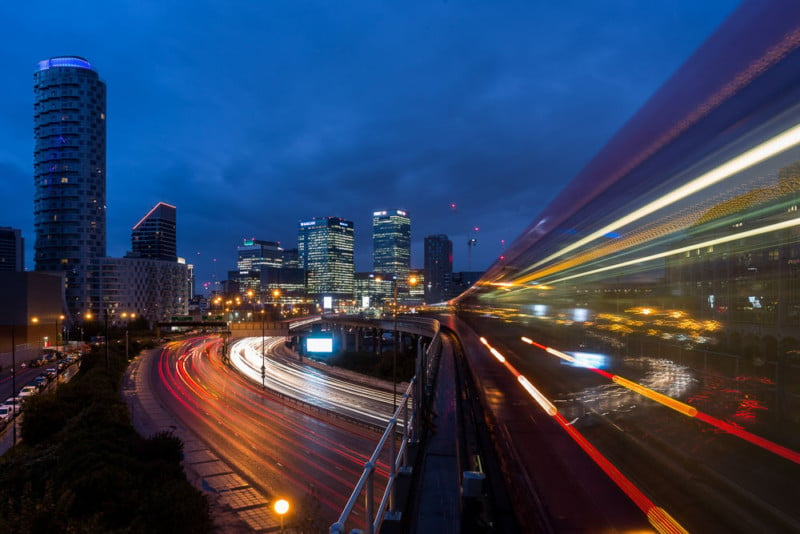 In this article, I am going to dissect how I took an image from both a technical and narrative standpoint. I hope this gives you some ideas for your own photography.

Let’s start with a look at the technical side, shall we?

I love this shot for the success of execution. My setup and exposure were well-timed and exposed. Slow shutter for effect. Sweet aperture (for that lens) and an ISO that gave me all the contrast and color my camera is capable of.

I was concerned that the train movement was going to mess with my sharpness, but the platform was really solid and had no vibrations.

This is something to consider when shooting long exposures — you can be stable with your tripod, but what about the place you are shooting from?

The f/11 gave me good depth of field from 3 feet to infinity. I focused about a third up from the bottom of the frame to make sure the close distance would be sharp.

I had a window of about 12 minutes where there was a perfect balance of both ambient and artificial light. I made about 10 shots and adjusted the shutter speed from 15 seconds to 8 seconds as the light increased. It was still too dark for a daylight white balance (5400K) so I settled for around 3200-4000K, which is why the sky is so blue.

In Lightroom, I boosted the contrast quite a bit to enhance the lines and separate the colors, which I then further controlled with hue/saturation/lightness. I put the vibrancy and clarity up high to give it added punch.

It is a high-energy image, with the lines taking the eye around the image and back again, bouncing off the buildings and looping around. The streaks created by the long exposure just enhance this feeling of speed and energy.

Now let’s look at the story that I imagine for this photo. I think creating stories within your images is important, and reflecting on what your images say is a useful exercise in developing your critical skills in photography.

When I am out shooting in the morning, I am out way before most people are even awake. I watch the sky changing, the light appearing, feel the beautiful calm. Then a trickle of people starts to appear.

Before long the trickle turns to a mad rush of people walking and in cars, buses, trains, boats even. The energy rushing through the city is intense and feels sometimes like it wells up from nowhere. A tap has been turned on full, a button has been pushed and released.

I like this image because it shows how intense metropolitan life is. It feels both hectic and crazy busy but ordered and organized at the same time.

You have the rush of people, but they are in lines, following the path, using the city efficiently to get to their destinations on time.

Because this shot was taken when it was still early you can see those who rise first, and I feel their energy to start the day and get moving are represented in the streaks of light. These people are active and in the chase.

There is also the glow of lights from the office buildings — people who are at work already? Or who never left? Perhaps they are the people who come to clean and care for the building, coming and leaving unnoticed, like whispers in the night.

So many stories could be told from the people you know are in this image but can’t see.

To me, this image talks about the energy you need in the pursuit of survival. The city is big and unwieldy and hard. But with desire and focus, you can command the city to your will.

About the author: Anthony Epes is a photographer whose work has been featured internationally; including on BBC, French Photo Magazine, Atlas Obscura and CNN. The opinions expressed in this article are solely those of the author. Epes is also a teacher – writing in-depth free articles on his website. Receive his free ebook on the two essential skills that will instantly improve your photos, and sign up to his weekly newsletter providing inspiration, ideas and pro-photo techniques. This article was also published on Cities at Dawn.

A Day in the Life of a Kiwi Police Officer Photographer

This 4K Timelapse is a Dazzling Tribute to New York City