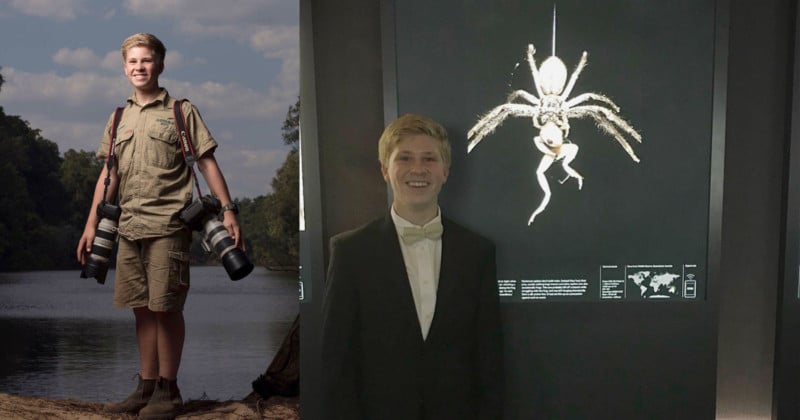 The late Steve Irwin gained worldwide recognition as The Crocodile Hunter who shared the beauty of nature and wildlife. His 14-year-old son Robert Irwin is now doing the same thing, except he’s also behind the camera in addition to being in front of it. And one of Robert’s photos was just honored by a top photo competition.

When Wildlife Photographer of the Year (WPY) unveiled its 2018 winners in October, one of the highly commended photos in the 11-14 Years Old category was a photo by Robert.

So very proud for my photography to be highly commended in the world’s most prestigious wildlife photography competition, ‘Wildlife Photographer of the Year’ here in London. Honoured to be part of the @nhm_wpy event, amongst some of the greatest photographers of all time. Congratulations to all of the other amazing commended and winning images. Thrilled that my photo will be part of a gallery going worldwide to hopefully inspire other young people to take up photography and appreciate the natural world. #WPY54 #NHM

“This image has been selected as Highly Commended in Wildlife Photographer of The Year Awards, the most prestigious photography competition in the world,” Robert writes. “So honored!”

Robert says he spent a month visiting a remote swamp in northern Queensland to capture the photo, which shows a huntsman spider eating a frog. It’s one of the few photos showing this that exist.

Entries are now open for the Australia Zoo Crikey! Magazine Photography Competition. I’m so excited to be part of the amazing judging panel this year! I love photography so much because it is such a great way to inspire people to appreciate our amazing natural world. I can’t wait to see the photos you enter! Link in bio for details…

The photo is now touring the world with the WPY exhibition and will be shown in 60 museums across 6 continents.

WPY is in its 54th year and bills itself as “the most prestigious nature photography competition in the world.”

This Guy Shot Color Photos with His Game Boy Camera