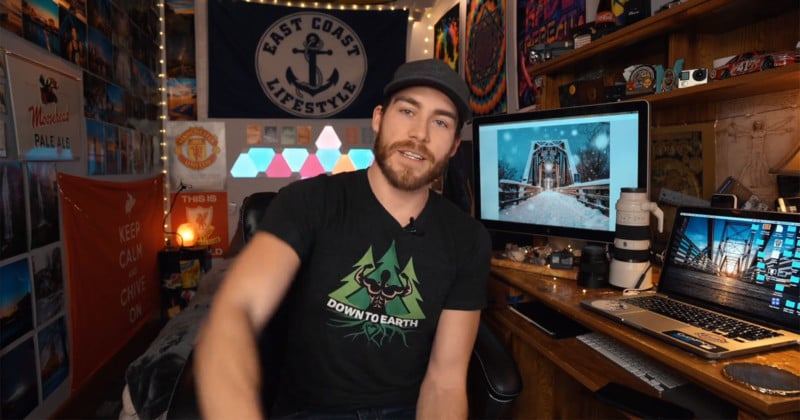 Heads up: if you sell your photos as microstock, companies can use your work in big ways for a very, very small payment. A photographer just found that out the hard way after he found one of his photos featured on a number of products in Walmart.

Globalnews.ca reports that Fredericton, New Brunswick-based photographer Michael Stemm was made aware of his photos in Walmart after his friends stumbled across the products.

Upon visiting a local Walmart himself, Stemm found his photo on greeting cards, calendars, and even large throw blankets.

Stemm had captured the photograph back in December 2017 while walking across a snowy bridge in the city. He shared it widely across social media and has been selling cards and prints of it.

Then in February 2018, he learned of using microstock photography to generate extra income, so he “randomly uploaded one picture” to the stock photo service Shutterstock.

The photographer never read Shutterstock’s terms and agreement and never checked his account again after uploading the photo, according to Globalnews.ca.

Stemm says he was then shocked to find his photo being “exploited by big companies.”

It turns out a Newfoundland-based company called Islandwide Distributors (IWD) had licensed Stemm’s photo royalty-free from Shutterstock for just $1.88.

The company then turned around and made at least 500,000 units of products with it — Stemm learned this number after reaching out to the company.

So while Stemm’s experience may seem unfair, it was likely entirely lawful and within Islandwide’s rights.

Stemm posted a video to his Facebook page to tell his story and warn others about it:

“Walmart is selling my picture without my permission throughout all New Brunswick,” Stemm writes in the description. “I feel like I am being taken advantage of in this situation.”

The video has since been viewed over 60,000 times, and it attracted the attention of Walmart Canada, which apologized in the comments and reached out.

Unfortunately for Stemm, he isn’t even able to withdraw the $1.88 he earned, as his account needs to reach a balance of $50 before he can see the funds.

“I just don’t think it’s fair that they bought the picture on Shutterstock for $1.88 and they’re able to exploit it that much and get that much profit,” Stemm says. “The lesson that’ll be learned here is: don’t use Shutterstock if this is actually how it’s going to be. I didn’t expect it to get exploited this way.”

Tired of Lightroom? Ditch the Catalog and Try Adobe Bridge