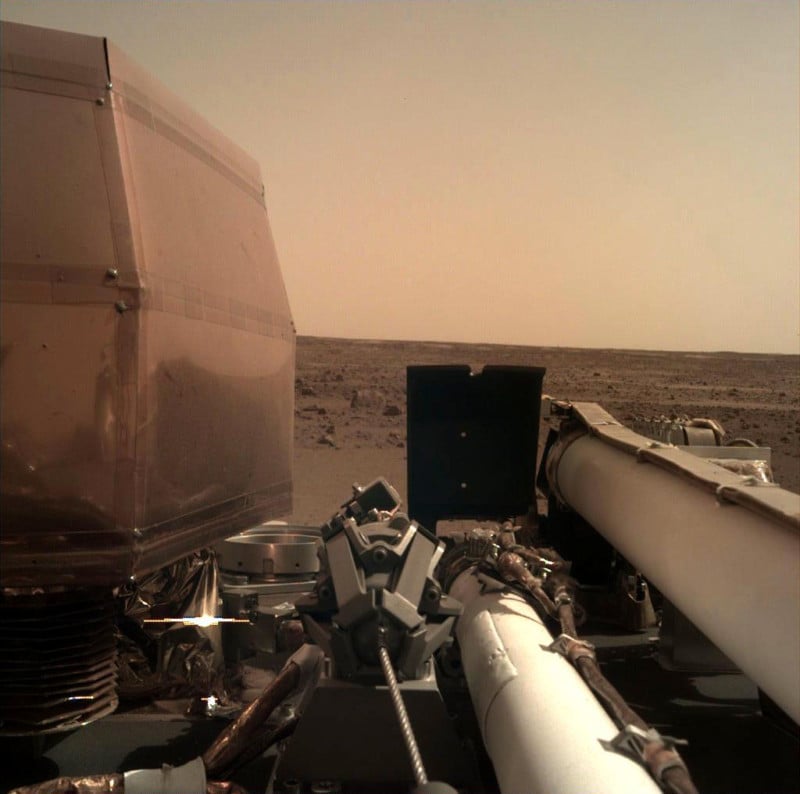 After a half-year journey covering over 30 million miles, NASA’s InSight lander just touched down on the surface of Mars to begin its mission of studying the red planet’s deep interior. InSight also captured and sent back this first clear photo from the ground, a 1-megapixel selfie.

The photo was captured by InSight’s Instrument Deployment Camera (IDC), which is found on the lander’s robotic arm. In the background is Elysium Planitia, a large plain located at the planet’s equator.

Aaah…soaking up the Sun with my solar panels. 🌞 After a long flight, and thrilling #MarsLanding, it feels great to get a good stretch and recharge my batteries. (Like, literally.) It’s just what I’ll need to really start getting in tune with #Mars. https://t.co/yse3VEst3G pic.twitter.com/LpsiI0KNNz

InSight’s first non-clear photo of Mars shows dust speckled on the transparent dust cover that was over the camera.

My first picture on #Mars! My lens cover isn’t off yet, but I just had to show you a first look at my new home. More status updates:https://t.co/tYcLE3tkkS #MarsLanding pic.twitter.com/G15bJjMYxa

After snapping the photo, InSight beamed it to NASA’s Odyssey spacecraft that’s currently orbiting Mars, and the spacecraft then transmitted the image back to scientists here on Earth at NASA’s Jet Propulsion Laboratory in Pasadena, California.

In the coming days, InSight’s robotic arm camera will be used to photograph the ground to help scientists decide where to place the lander’s scientific instruments for its two-year mission.