Like many professional photographers, my main camera is a bit of a beast. A Fuji X-T2, usually with a big lens, and always with a battery grip on it. It’s a bit big to go traveling with, and although it’s not as big as my Nikon D600 and grip that I used to use, it still warrants the travel/side-arm camera I bought in the D600 days.

I take that X100T everywhere with me. Across the city, across the province, across the country, or across the world, it’s been from Berlin to Spain to Florida to Mexico to small little towns in the interior of my province. Frankly, it sort of blurs into the background of my life, and just goes everywhere with me, so when I did a short 4-hour drive to visit a friend in early October, and of course my trusty X100T came with me.

Upon our arrival in the small town of 90,000 we were visiting on a warm Friday evening, my friend Tyrone and I stopped at a restaurant for some beers and a burger. We are from a big, relatively safe city nearby, so we thought nothing of leaving all our things that we’d traveled with inside the trusty black SUV that Tyrone drives. It’s got an alarm, it’s parked right in front of the restaurant, and we’re right in downtown in a well-lit area, what could go wrong?

We returned to the truck after dinner, and shortly after driving away I noticed that my new BlackBerry KeyTwo was missing… Had I dropped it when I got out of the car earlier this evening? We returned to the street we had parked on, and I searched everywhere… no luck. I checked Find My Device, and it showed the same spot- either the device wasn’t checking in, or someone had picked it up and turned it off. Well, phone gone. Ok, sh**ty, but probably my fault, but it’s a work phone so not the end of the world.

The next morning, I get a call from Tyrone asking if I saw his backpack or perhaps brought it in with me (we were staying at two different places). Nope, hadn’t seen it, are you sure you brought it? He was certain — he had gotten something from it when we made a pit-stop on our way out here the previous afternoon.

Uh oh. The thought finally sank in that someone had stolen my phone, and his backpack, which had his iPad, work laptop, and some expensive jeans in it.

We started researching how hard it was to jimmy his model of car — apparently not that hard. This wasn’t good… then it struck me: my camera! I quickly searched the car, and the sinking realization set in that after we had returned back to the spot we were parked yesterday, I had put sunglasses into the exact space my camera had previously occupied in his car’s console… we had been burgled.

The count came up to: Tyrone’s backpack (worth about $80), some assorted socks, underwear, and T-shirts (cumulatively about $60), his jeans (in the $300 range), his iPad, his work laptop, my work blackberry, and my camera… all told, about 6 grand worth of stuff.

Saturday afternoon now, after the Friday night theft, Tyrone phoned in the police report and logged it all in as much detail as we could. Our day was pretty listless after that until that evening, when Tyrone got a call from the local police saying they had recovered his backpack and with it a bunch of our stuff. iPad, work laptop, and work blackberry, all found with a guy that was hanging around another guy at a Tim Hortons who apparently was waving a gun around. Sadly, no jeans, and no camera.

We returned home, I unhappy, and he only marginally better — he loved those jeans, and I certainly don’t need to say how much it sucks to have your camera stolen, even if it is just your travel camera. 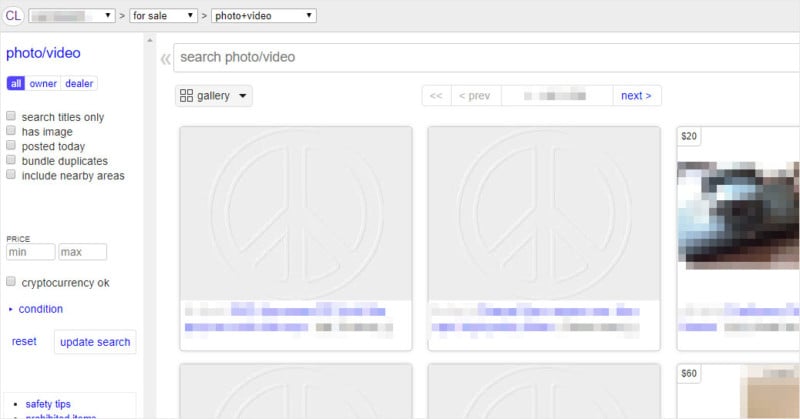 The next month was spent scouring craigslist for any mention of a Fuji camera. In fact, the town was small enough that I could show ‘all for sale’ on craigslist and just scan through the newly added items to see if I recognized my camera among them. No luck.

Having effectively given up, and realizing my camera was probably being used and enjoyed, I began searching for something new. Something small — a Fuji, no doubt, but something older-ish (and thus cheaper), and with interchangeable lenses so it could share lenses with my X-T2.

I exhausted craigslist’s options pretty quickly and thought maybe Kijiji (a craigslist competitor) would have some different options. I popped open Kijiji, and hit Photo + Video, before realizing that I was on the entire province Kijiji, not localized to my city. Whoops! I scrolled a bit to try to change that, but before I did, something caught my eye: my camera.

Oh, it was mine, alright — I could tell from a first glance. That absurd tele-converter lens with a bulbous piece of round glass sticking out the front, the dust and specks in all the right places. Yep, that’s my baby!

To say I freaked out is a bit of an understatement. I sent the link to some friends, and all agreed that the timing was too perfect — it had been listed about a week and a half after the theft. However, the oddest part was not the timing but the fact that the camera was described as having a “fisheye lens”! Anyone who knows the X100 series of cameras knows that there are two screw-on lens attachments for this camera, and two only: a tele-conversion lens and a wide-conversion lens. The wide looks quite normal, and the tele looks like a goddamn fisheye!

I sent a text to my new friend, whom I’ll call Mark. I was casual, checking in to see if the camera was still available. I explained I was busy with family stuff that day (not wanting to reveal I was traveling cities for it), but that I could come by the next afternoon. He said someone else was coming by that evening to look. Oh really? Your post has been up for 2 weeks and as soon as I ask, someone else is coming to look? Sure.

I offered a case of cheap beer if he held it for me, saying it was for my girlfriend’s birthday and the price was good enough to throw that in. He agreed.

I told Tyrone, we planned our trip, and the next morning we set out.

On our way back to this lovely little town, we gave our friends at the local Royal Canadian Mounted Police (RCMP) detachment a call and asked for some assistance.

“Yeah we can’t really do much — we can advise you not to go to meet the person but our presence in a squad car is probably going to spook them. You’re on your own!” That’s more or less the gist of the conversation I had. It ended with me passing on the phone number of the person I was communicating with, in the off chance that it was in their system.

30 minutes after my conversation with the RCMP, we got a ring back. Turns out that some people are stupid enough to continue using the same phone number for multiple illicit activities, and this character was known to police and was known to be dangerous. Remember that guy with the gun from before? Yeah, perhaps the same guy…

We became a bit nervous, but the police immediately said they would like to help set up a sting. And so, a plan was put in motion. I would continue communicating with the seller, we were to arrange a public meet-up spot, and we would communicate with the police when the seller had arrived.

The sting was set for 5 pm at the tables in front of a local, not-too-busy McDonalds. The air was a dry cold, and it was already dark out… a perfect night for revenge. Tyrone and I pulled up a few minutes early, and little ways away, in his black SUV, hoping the seller wouldn’t recognize it as the car the camera was stolen from a month prior. 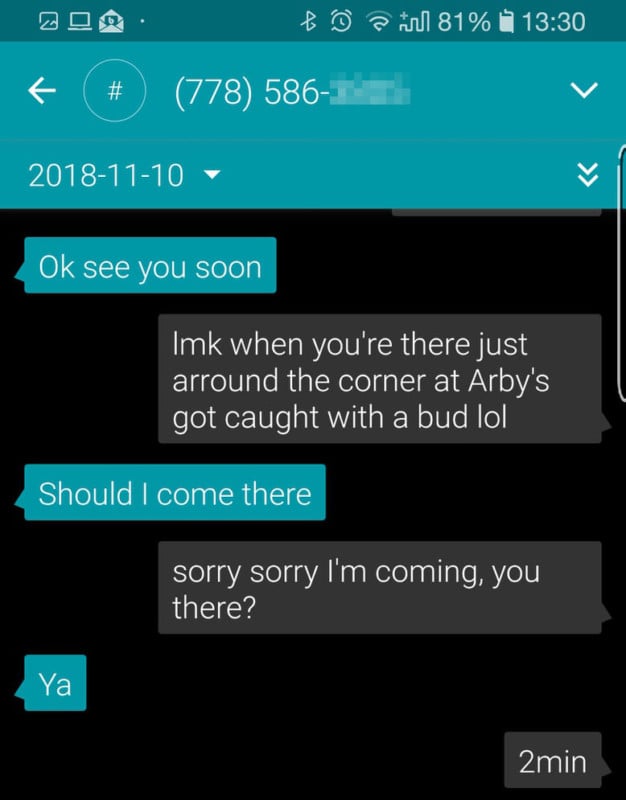 We waited for about 10 minutes before a 20-something guy dressed as how the seller had described himself pulled up to the tables from the other side on an expensive mountain bike. I texted my officer friend that he was there, and a ghost car that had been sitting a little further from us started to silently drift forward.

The car approached the seating area, with our sticky-fingered friend sitting casually on a table, with his bike just off to the side. Suddenly the area was lit in red and blue as the ghost car lit up and two officers popped out, guns drawn, and demanded that Mark freeze and that he was under arrest.

I’ll tell you what: Mark did no such thing. He bolted, alright. Gone around the corner, with an officer on foot giving chase, the other whipping the car around, and suddenly two squad cars appearing out of nowhere and flying off in the same direction.

We fired up Tyrone’s truck and hauled off in the same direction, a quick corner later and we saw a great sight: three squad cars with their lights ablaze, standing in front of them were a half-dozen officers, many with guns that were certainly larger than would be necessary for this situation. And at the very front, pressed up against the side of a dingy motel, while a woman looked on from a nearby doorway. 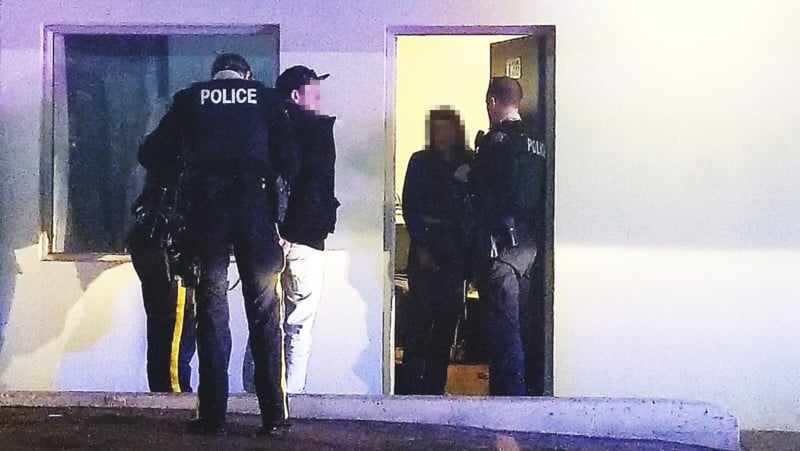 Our dear friend Mark had come all this way to so kindly return my camera to me. 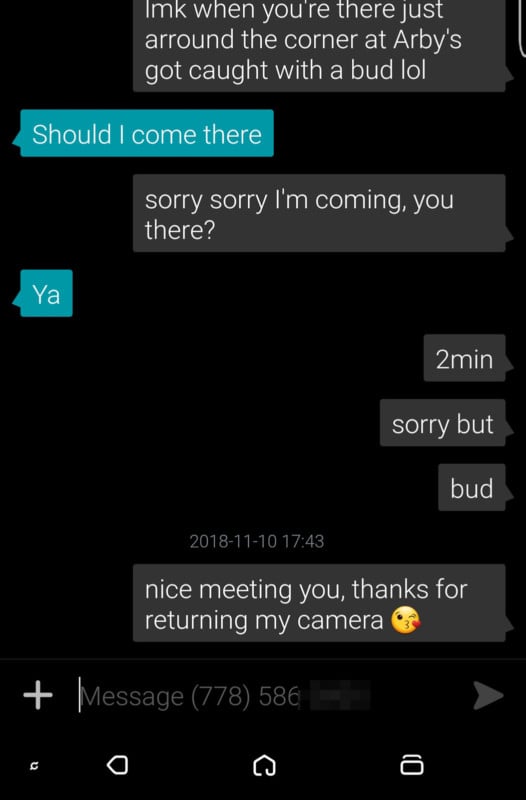 About the author: Mr. Greenshirt, who wishes to remain anonymous, is a photographer based in Canada. The opinions expressed in this article are solely those of the author.

I Shot Ultra-Macro Video of the Wet Plate Collodion Process