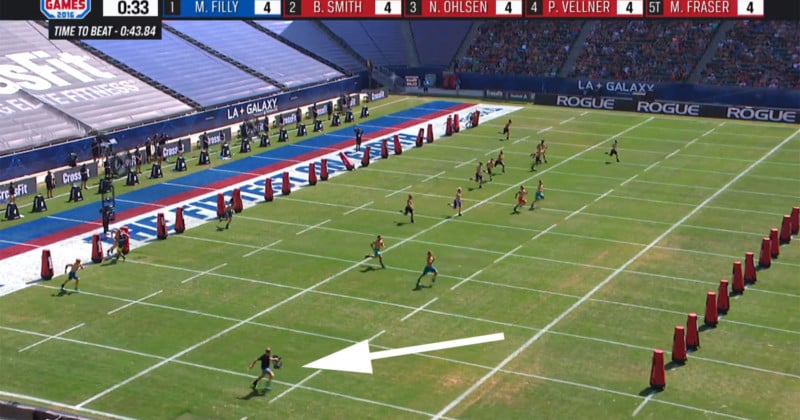 Live side views of sprinters are usually shot using remote cameras on rails. But if you have a cameraman that’s as fit and fast as the athletes themselves, you can ditch the high-tech equipment and use just a gimbal stabilizer instead.

A clip from the 2016 Reebok Crossfit Games has been going viral online this week. It shows how ultra-fit cameraman Marston Sawyers ran alongside the competitors during the Suicide Sprint, keeping up with the top runners and keeping them in the frame while holding a heavy stabilized camera rig with one hand.

Here’s the shot Sawyers captured next to the footage of him sprinting:

Taking 3rd while holding a camera. from r/BeAmazed

Sawyers’ efforts earned him a shot out from The CrossFit Games when it posted the clip two years ago:

The viral clip is also strangely similar to this old Powerade commercial in which an Olympic cameraman wins gold:

“I started doing CrossFit media back in 2010 at a sectional event in Utah that @brookeence was competing at,” Sawyers writes after parting ways with CrossFit last month. “I was there to show support for my girlfriend but also try and get footy of her competing. Somehow I was introduced to @hebercannon – CrossFit’s first field producer. I ended up assisting Heber throughout that weekend and in return he put me in contact with the higher ups at HQ.

“With that said I’m more confident than ever in my abilities as a filmmaker/storyteller. CrossFit forced me to take on projects that seemed very daunting at first but very rewarding in the end.”

You can find more of Sawyers’ work on his Instagram.

Tripod as Zen Master: The One Piece of Kit That Has Shaped Me