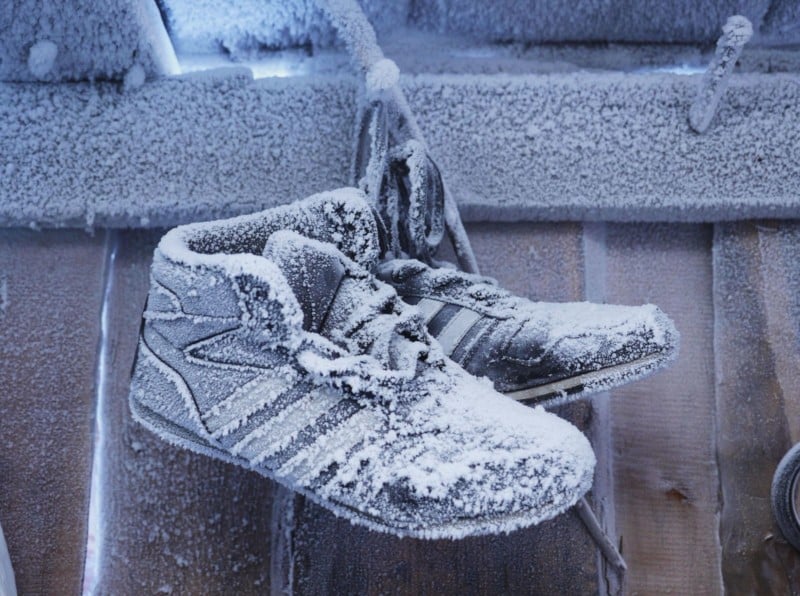 I’m New Zealand-born photojournalist Amos Chapple, and I’ve worked in some of the most extreme places on earth, most chillingly in Siberia’s “Pole of Cold” where villagers endure temperatures that can drop below -94°F (-70°C). As winter begins to bite, here are six pointers for shooting when the cold gets real.

On my first couple of days working in -58°F (-50°C) I noticed many of my images were looking flat – with lifeless colors and weak contrast. Eventually, I realized the vapor from my breath was drifting in front of my lens. Try your best to hold your breath for a couple of seconds before you take a shot, or at least keep an eye on where those big steam-clouds are drifting.

Heading into a warm building with a frozen camera is a tricky business. The best way to avoid camera damage is to make sure the warming process is slow and dry. Wrap your camera in a clean cotton t-shirt, then seal it up inside a plastic shopping bag before you step inside. The t-shirt will soak up the moisture created during the warming process and also slow down the transition to room temperature. It will be hours before the camera is fully thawed and you can take it out of that bag. Which is why you should…

Shooting indoors and out is impossible with one camera in severe cold. I kept a small backup camera stuffed into the band of my undies (I hope this won’t affect resale value…). Where exactly you keep the thing is up to you, but it needs to be somewhere very warm. When you step inside you should seal up your outside camera in your cold camera bag. Then dig into your pants, or bra, pull out that nice warm backup and get shooting.

As the fur-clad locals of Yakutsk will tell you, natural materials are best for Siberia’s winters. Buying a fur coat would cost you thousands (and, anywhere outside Siberia, probably have you flayed alive by PETA activists) but you should definitely go natural with one key piece of clothing – gloves. I tried several different kinds, but the sweet spot between warmth and dexterity ended up being two pairs of simple woolen gloves, worn one on top of the other. Your fingers will eventually get cold but it’s easy enough to slide them out of their sheaths and scrunch them around inside the palm of your gloves when they do. Big, expensive gloves and mitts are just too cumbersome to shoot with.

(And a note on clothes – it’s not as spendy as you might think to dress for the extreme cold. As long as you have decent outer jackets and pants, you can just stuff yourself into layers and layers of old sweaters and tracksuit pants under your shell, though I would recommend a fur hat, and, for those actually going to Siberia, some of the cheap but super-warm Russian village shoes).

5. Keep things close to your chest… But not too close

All cameras will eventually freeze and stop working in extreme cold. The challenge is to slow that process down as best you can. Walking around with a camera swinging in the arctic breeze can cut your shooting time down to minutes instead of hours, but if you keep your camera too close to your skin it will steam up. The happy compromise I reached was to unzip just the top of my jacket and stuff the camera down inside there when I wasn’t shooting. With 5-6 layers of clothing under the jacket that outer later wasn’t too warm & steamy for the camera, but raised the temperature enough to add a few hours to my camera’s endurance.

Zoom lenses become very stiff in the cold as the grease inside freezes. You’re better off shooting with 2 or 3 fast primes with nice wide focus rings that your woolly fingers can easily grab hold of. Changing lenses can be tough, but honestly not as tough as trying to twist the zoom ring of a lens so cold you can practically hear it scream.

About the author: Amos Chapple is a Kiwi photographer who makes news-flavored travel photos and writes for Radio Free Europe/Radio Liberty. He started off at New Zealand’s largest daily paper in 2003. After two years chasing news, he took a full-time position shooting UNESCO World Heritage sites. In 2012, he went freelance but kept up the travel. Since then, he has been published in most major news titles around the world. You can find more of his work on his website, Facebook, and Instagram.

Fotolia Shutting Down After Getting Sucked Into Adobe Stock

What if He Falls? Shooting the First Free Solo of El Capitan