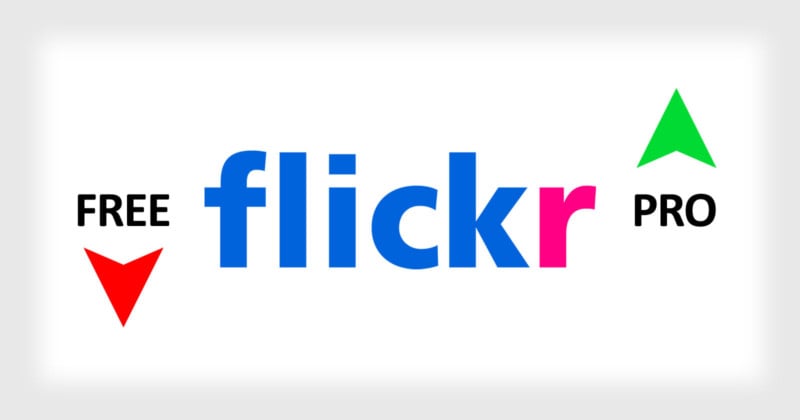 After Verizon-owned Yahoo sold Flickr to SmugMug in April of this year, it seemed likely that changes would be coming to the service due to new ownership. Today the first major changes just took place: Flickr has downgraded its free plan and upgraded its pro plan.

The Downgrade of Free

Flickr’s free accounts will now be limited to storing a combined total of 1,000 photos and videos. Photos aren’t limited by resolution and are stored in their original quality.

Prior to this change, Flickr users on the free plan were given 1 terabyte, or 1,000 gigabytes, of free storage space at full resolution. Since 1 terabyte can hold 20,000 files weighing 50MB each (which is way more than most photos), this new limit of 1,000 files is clearly a downgrade for photo-happy Flickr photographers.

“Unfortunately, ‘free’ services are seldom actually free for users,” SmugMug says. “Users pay with their data or with their time. We would rather the arrangement be transparent.”

Flickr users who were around long ago may remember that prior to 1TB of free storage being announced in 2013, free users were limited to uploading 2 videos and 300MB worth of photos per month.

If you’re a Flickr free member who already has over 1,000 photos in your account, you have until January 8th, 2019, to download photos over the 1,000 limit. After that date, you will no longer be able to upload new photos to Flickr. And after February 5th, 2019, Flickr will begin deleting files that are over your 1,000 photo/video limit, starting from oldest to newest, until your account contains only 1,000 files.

The Upgrade of Pro

SmugMug is turning its attention to better serving paying customers, which makes sense because SmugMug’s own photo hosting service doesn’t have a free plan at all.

The Yahoo! sign-in that was introduced after Yahoo acquired Flickr will be phased out in January 2019, and Yahoo! accounts will no longer be required for access.

Pro users will continue to enjoy unlimited storage of photos and videos at full resolution and an ad-free experience for both themselves and their visitors. New “OG Pro” badges will be displayed to recognize long-time members.

Photos are now displayed at 5K resolution for any screen, “from smartphone to jumbotron,” SmugMug says. That’s up to 5120×5120 pixels, or 26 megapixels (6 times larger than Flickr’s previous limit of 4MP). Videos can now be 10 minutes long, up from 3 minutes.

Advanced Stats now provide new analytics for photographers to peruse — you’ll be able to see which of your photos are trending and which have performed the best. All stats can be found in the Flickr mobile app.

Finally, Flickr is partnering with other companies to offer discounts to Pro members — companies like Adobe software, SmugMug portfolios, Peak Design bags and gear, and more.