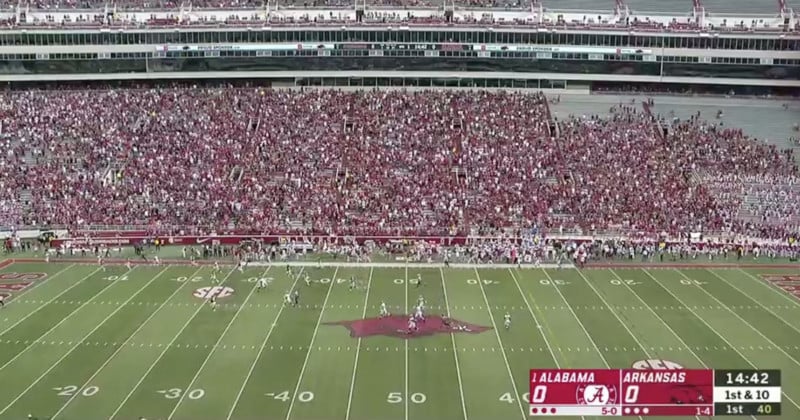 For certain sports, telephoto lenses are crucial for allowing viewers to see the action from a distance. But for one major football game this weekend, ESPN was forced to broadcast parts of the game with a wide-angle view. Frustration, mocking, and hilarity ensued.

SBNation reports that this is what ESPN’s TV broadcast looked like at the beginning of the game: 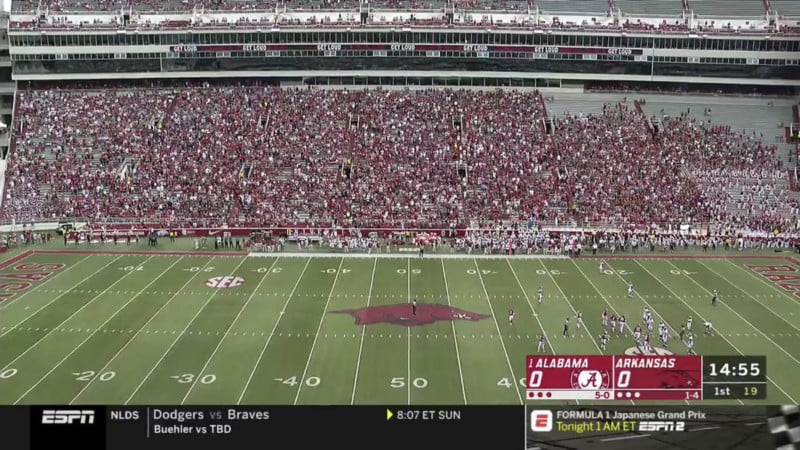 You can see the same view of the players looking like ants on the field in this highlights video:

The wide angle view made it impossible to see the action for certain plays… like this field goal:

The Alabama-Arkansas broadcast is having camera issues because of lightning. This is what the Alabama extra point looked like: pic.twitter.com/QmHkdnr9gs

The reaction was swift and brutal on social media.

Alabama-Arkansas is currently being broadcast via Google Earth

ESPN isn’t even showing up for Alabama games

Here is an instant replay of that fumble pic.twitter.com/4SBnWLmPAN

If this is the best ESPN can do, they'd be better off streaming it from some fan's phone.

How Alabama and Arkansas fans watching the game at home. pic.twitter.com/zMN5Qgbgov

These ESPN camera angles for Alabama-Arkansas are like when your aunt tries to film a pee wee football game from the stands with her iPhone.

Alabama scored before ESPN even got its cameras set up. pic.twitter.com/3ONNFa5X9D

No, ESPN wasn’t failing at its job and it wasn’t intentionally messing with its viewers: it was forced by weather to pull its main camera operators. Here’s ESPN PR rep Keri Potts with the explanation:

So since a lightning strike was detected by official ESPN partner AccuWeather within 8 miles, the camera people perched up high on the stadium operating the high-powered lenses had to abandon their posts for 30 minutes.

Football fans at home were forced to squint or get up close to their TVs to see the action, but that’s a small price to pay to keep the camera operators out of harm’s way. In the future, though, ESPN might want to look into using remotely-operated cameras as a backup option.

On Leaving My Flashes at Home for a Portrait Shoot

This is What a Drone Strike Would Do to an Airplane