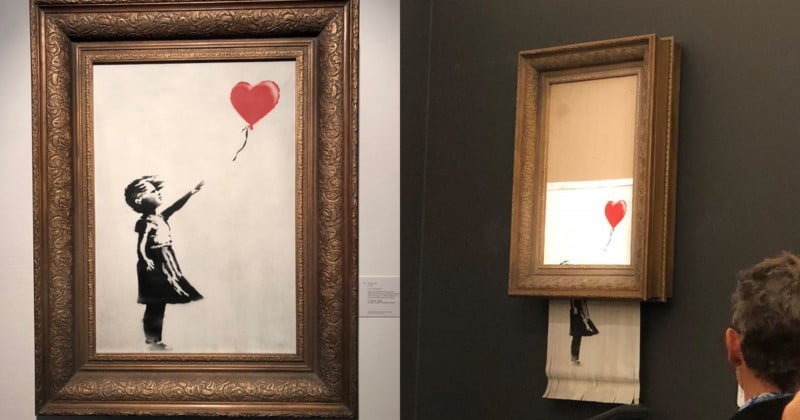 The anonymous street artist known as Banksy just pulled off one of the greatest pranks ever seen in the art world: one of his paintings was sold for nearly $1.4 million at a Sotheby’s auction in London last night, and immediately after being sold, the painting self-destructed.

After the hammer fell, attendees suddenly heard an alarm ring out. As everyone’s attention was drawn to the painting in the large frame, it suddenly was drawn through the bottom of the Banksy-made frame and shredded.

Banksy published this video showing how he built the shredder frame and footage of the painting being shredded:

. "The urge to destroy is also a creative urge" – Picasso

“[It] sold for over a million dollars and as we sat there…the painting started moving,” Robert Casterline of Casterline Goodman gallery tells Hyperallergic. “[It was] all out confusion then complete excitement.”

It turns out there was a remote-control mechanism built into the frame that shredded the painting on command. Amused attendees quickly pulled out their phones and cameras and began snapping photos with smiles on their faces.

Shortly after the incident, Banksy uploaded a photo of the painting in the process of being shredded — surprised and horrified expressions can be seen on the faces of onlookers.

The photo was captured by entrepreneur Dan Fleyshman, who was in attendance:

$1,300,000 BANKSY artwork piece just “self-destructed” right after it was sold at Sotheby’s auction!🤯😳

(An alarm sound went off and the frame began to shred the art piece.)🚨 pic.twitter.com/TAsrE9ptIh

The auction house says it’s in discussions with the anonymous buyer (a private collector) about the next steps. The art world is currently trying to figure out whether the painting was destroyed or transformed, and whether its value was decreased or increased.

“We’ve been Banksy-ed,” says Alex Branczik, Sotheby’s European head of contemporary art. “We are busy figuring out what this means in an auction context. I’ll be quite honest, we have not experienced this situation in the past, where a painting is spontaneously shredded upon achieving a record for the artist.”

And thus the legend of Banksy grows.