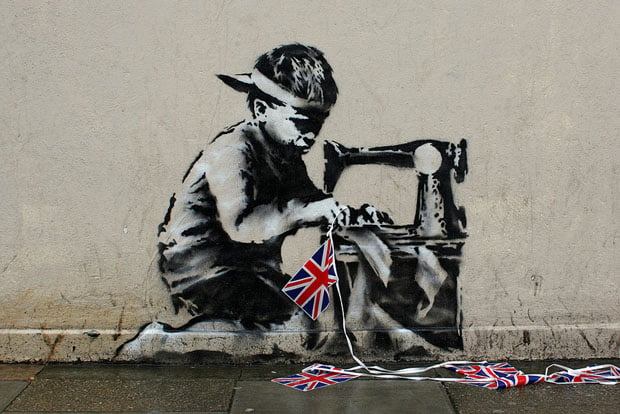 Who owns public art illegally placed onto private buildings? That’s a question that came up recently after a famous Banksy work in London was ripped out of the side of a building, shipped across the Atlantic, and put up for auction with an estimated final price of over half a million dollars.

The piece in question (shown above) is titled “Slave Labour,” and first appeared on the side of a discount store in North London in May 2012. CNN reports that many residents grew quite fond of the piece and the attention it gave the neighborhood.

Unfortunately for those residents, the piece was abruptly cut out of the wall last week. News soon emerged that the owner of the building had ordered the extraction in order to “preserve” the work.

Well, “preserve” is apparently synonymous with “profit off” in the owner’s mind: “Slave Labour” has turned up in the catalog of an auction house in Miami, and will be sold this Saturday in the “Modern, Contemporary and Street Art” collection for an estimated $500,000 to $700,000.

Needless to say, the locals who once enjoyed the piece aren’t very happy about this development. The case has also triggered a discussion regarding who technically “owns” the art, since it was installed without permission in a public location on a private building.

The Miami art dealer behind the upcoming auction, Frederick Thut, defended the sale to the BBC, saying “the work was painted on a private wall and the owner of a private wall can do whatever he wants with his own wall.”

While this particular case isn’t very relevant to the world of photography, the concept of public street art is. In 2010, the photographer known as JR won the prestigious $100,000 TED Prize for his large-scale photos installed in slums around the world.

If the Banksy sale does go through and end up fetching a sizable figure, we may soon find many other examples of famous street art installations being ripped out of their original “canvases” and sold to private art collectors.

Image credit: Banksy by DeptfordJon, on the street by collectmoments