Wedding photographers often complain of ‘Uncle Bobs,’ or relatives who get in the way of professional photographers while trying to snap their own photos. When photographer Ashley Easterling encountered this during a wedding ceremony recently, she refused to allow the relative to ruin the bride and groom’s first kiss photo.

The 46-second video shows Josh and Lorna Dane Gantt being pronounced as husband and wife. As Easterling stands in the aisle to capture their first kiss as a married couple, the bride’s stepmother (who had repeatedly stood in the aisle to shoot photos with her smartphone) stepped in front of Easterling and started shooting her own snapshots.

Without any hesitation, Easterling pushed the stepmom aside with her shoulder, stepped up to the couple, and managed to get her shots before the first kiss ended.

“I politely asked several times for her to move,” Easterling says. “She popped off something smart… I told her I was the paid photographer, then she told me I wasn’t doing my job and walked right in front of me. Nope. I’m paid to do a job, and dang it… this girl is doing her job one way or the other.”

While the stepmom may not have been happy about losing the battle, the bride was delighted that her photographer fought to capture their special moment. 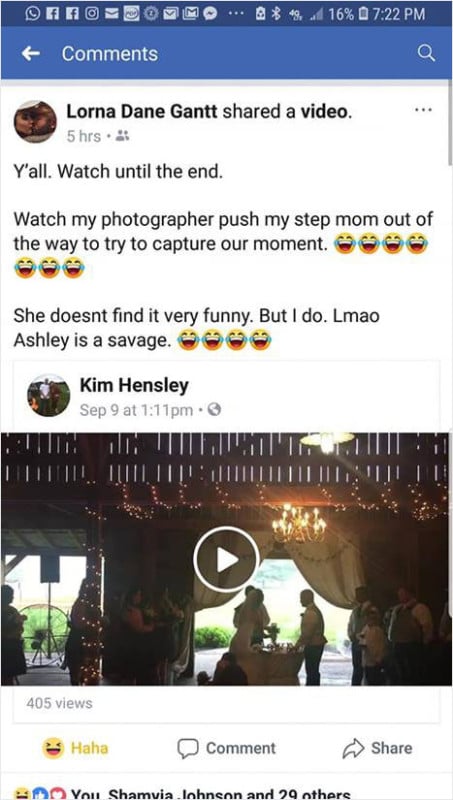 “When you have the best clients in the world,” Easterling says. “Lorna Dane Gantt, I swear we were destined to be besties.”

Hey, Photographers: When You Give It Away, You Diminish All of Our Work