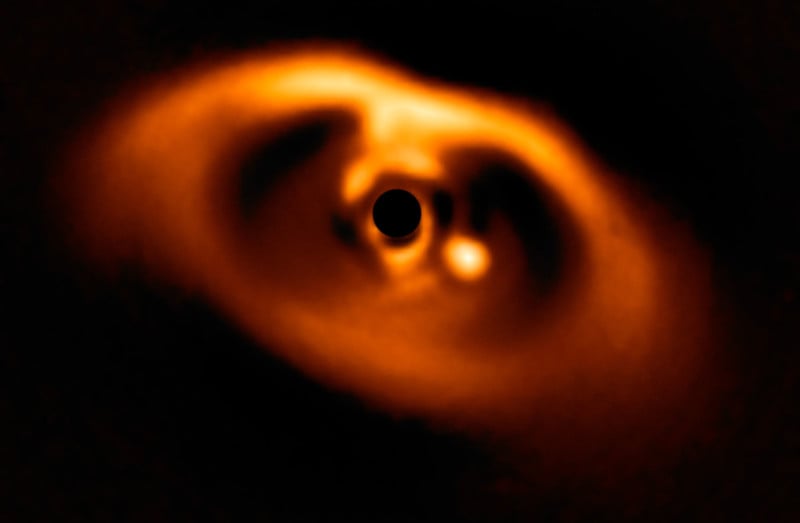 Behold: this is the first confirmed image of a planet being born. The image was captured by SPHERE, a planet-hunting instrument on the European Southern Observatory’s (ESO) Very Large Telescope.

The planet is seen as the glowing spot to the right of the black circle, which was caused by scientists using a coronagraph to blot out the light from the star at the center of the frame — without the coronagraph, the star’s blinding light would have prevented scientists from imaging the fainter disc and baby planet surrounding it.

“This glimpse of the dust-shrouded birth of a planet was only possible thanks to the impressive technological capabilities of ESO’s SPHERE instrument, which studies exoplanets and discs around nearby stars using a technique known as high-contrast imaging — a challenging feat,” ESO writes. “Even when blocking the light from a star with a coronagraph, SPHERE still has to use cleverly devised observing strategies and data processing techniques to filter out the signal of the faint planetary companions around bright young stars at multiple wavelengths and epochs.”

ESO scientists say the planet is in the process of being formed from the dusty disc surrounding the young star (PDS 70), and that the atmosphere of the newborn planet is cloudy. Despite being so close to the star in the photo, the planet is actually located about 3 billion kilometers (~1.86B miles) away from the star in space.

The Very Large Telescope was also responsible for the most detailed photo of a non-Sun star in 2017.

The Life and Work of Atlanta Hip-Hop Photographer Zach Wolfe