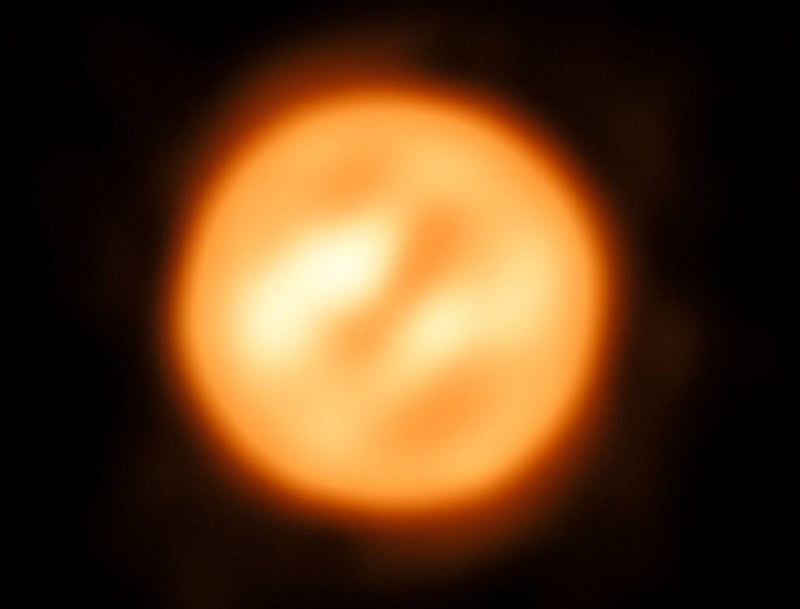 Astronomers using the ESO Very Large Telescope have created the most detailed photo ever of a star other than our own Sun. The subject of the photo is the supergiant Antares, visible to the unaided eye in the constellation Scorpius.

“To the unaided eye the famous, bright star Antares shines with a strong red tint in the heart of the constellation of Scorpius (The Scorpion),” the ESO writes. “It is a huge and comparatively cool red supergiant star in the late stages of its life, on the way to becoming a supernova.”

Antares has 12 times the mass of the Sun and a diameter 700 times larger. Here’s an artist rendering of what the star might actually look like:

The team of astronomers was led by Keiichi Ohnaka of Chile’s Universidad Católica del Norte. They used the Very Large Telescope Interferometer (VLTI), which can combine light gathered from four different telescopes to create the equivalent view of a telescope with a 200-meter mirror. This setup allows scientists to see details that are currently impossible to capture with a single telescope.

The team’s findings have been published in the scientific journal Nature.

(via ESO via Engadget)

Camera on Balloon Captures the Total Solar Eclipse from Near Space

Go Inside the Darkroom of Legendary Photographer Edward Weston