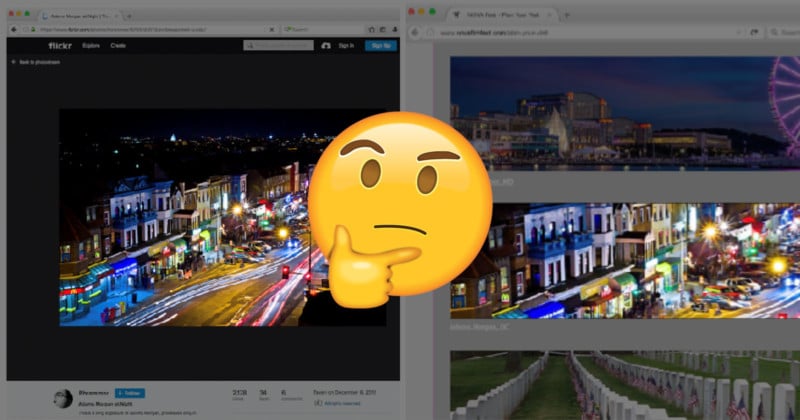 A Virginia federal court has made a decision that photographers won’t be happy to hear: the court ruled that finding a photo on the Internet and then using it without permission on a commercial website can be considered fair use.

The copyright battle started when photographer Russell Brammer found one of his long-exposure photos of a Washington, D.C. neighborhood cropped and used by the website for the Northern Virginia Film Festival on a page of “things to do” in the D.C. area.

In the United States, whether or not a use of copyrighted material without permission can be considered fair use (17 U.S. Code § 107) depends on four main factors: (1) the purpose and character of the use (including whether it’s “transformative” and commercial vs. non-commercial), (2) the nature of the copyrighted work, (3) how much of the work is used, and (4) how much the use affects the market and/or value of the work.

After considering these four factors, District Judge Claude M. Hilton of the Eastern District of Virginia concluded that the festival’s use of Brammer’s photo fit the criteria for fair use.

Here’s a breakdown of what Hilton wrote about various criteria (you can read the entire 7-page ruling here):

The Use was Transformative and Non-Commercial

The usage was apparently okay because it was used on a commercial website in a non-commercial way, and that it was informational rather than expressive.

The Use was “in Good Faith”

The use was in good faith because the company found it online, didn’t see that it was copyrighted, believed it was publicly available, and took it down when asked.

The Use was of a “Factual” Photo

The court decided that Brammer’s photo was more “factual” than “creative.”

The Use was of a Previously Published Photo

Apparently the fact that the photo had previously been published online worked against Brammer.

Furthermore, the scope of fair use is broadened when a copyrighted work has been previously published. It is undisputed in the record that Brammer previously published the photograph on several websites as early as 2012, and at least one of these publications did not include any indication that it was copyrighted. This prior publication and Violent Hues’ use of the photo for its factual content favors a finding of fair use.

The Use was Only a Crop Rather Than the Whole

It seems cropping and using only a portion of a photo is helpful for fair use, even though photographers regularly crop photos to create new photos that stand alone as works.

[I]t is relevant that Violent Hues edited the photograph by cropping approximately half of the original photo from the version it used on its website. Violent Hues used no more of the photo than was necessary to convey the photo’s factual content and effectuate Violent Hues’ informational purpose. The Court thus finds that this factor also weighs in favor of fair use.

The Use Didn’t Hurt the Potential Market

The court doesn’t think there’s any evidence that Brammer was financially harmed by the photo’s use.

Additionally, Violent Hues’ transformative and non-commercial use of the photo undercuts a finding of adverse effect on the photo’s market: Violent Hues did not sell copies of the photo or generate any revenue from it. There can be no legitimate argument that Violent Hues has “usurp[ed] the market” by providing a market substitute for the photo, especially since Violent Hues only used approximately half of the photo on its website.

So… It’s Fair Use

“Because each of the four fair use factors favors Violent Hues, the Court finds that Violent Hues’ use was a fair use, and that there was no copyright infringement,” Judge Hilton writes.

Reaction to the Ruling

As you might expect, there is strong disagreement with this court’s ruling.

Stephen Carlisle, the Copyright Officer of Nova Southeastern University, has written up a lengthy rebuttal of the opinion and writes that the ruling passed down on June 11th, 2018, is one that “has the potential to seriously erode the copyright protections afforded photographers.”

Attorney David Kluft of the law firm Foley Hoag has also written up a rebuttal titled “No, Virginia, You Can’t Just Copy Stuff You Find On the Internet, Even if You Don’t Notice the Copyright Notice.”

“Despite what you might have read […] you cannot just use photos you find on the internet, even if you are genuinely unaware of their copyright status,” the firm writes. “Brammer is NOT a coupon for free photos for your website.”