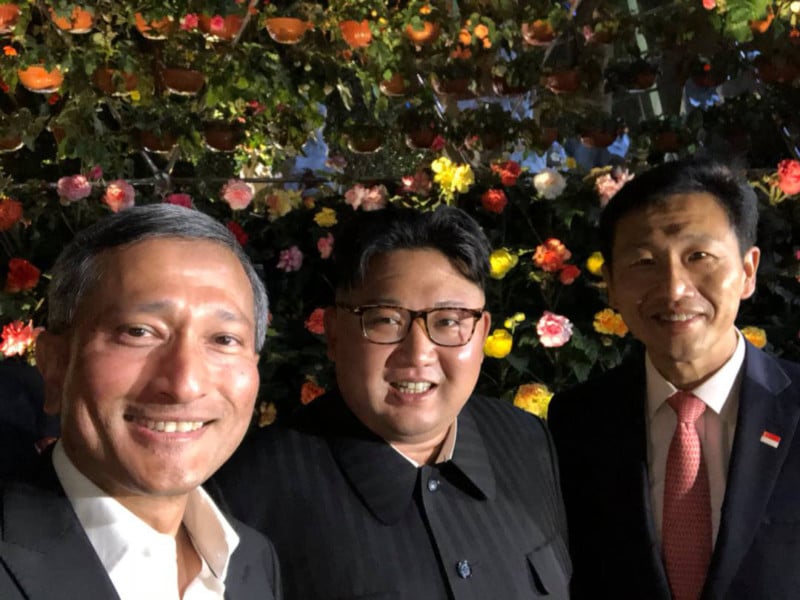 North Korean dictator Kim Jung-un is in Singapore this week for Tuesday’s summit with President Trump, and of all the photos that have emerged of his visit so far, there’s a curious one that has captured the world’s attention today: Kim Jung-un’s very first selfie.

Kim has been visiting tourist attractions in the Southeast Asian island country. On Monday night, Kim and Singaporean foreign minister Vivian Balakrishnan stopped on Jubilee Bridge at Merlion Park and Balakrishnan pulled out his phone for a selfie, which he then Tweeted.

The photo is believed to be the first-known selfie that Kim has posed for. A number of nearby photographers captured a behind-the-scenes view of it being snapped:

The photo behind Kim Jong Un’s selfie, from @AP pic.twitter.com/DPYtcwLndu

Here’s a video of the selfie:

The third man in the photo is Singaporean Education Minister Ong Ye Kung, who shot and shared a second selfie of his own with Kim:

Kim is perhaps best-known for official government photos showing him looking at things in his country. These latest selfies are quite… different.