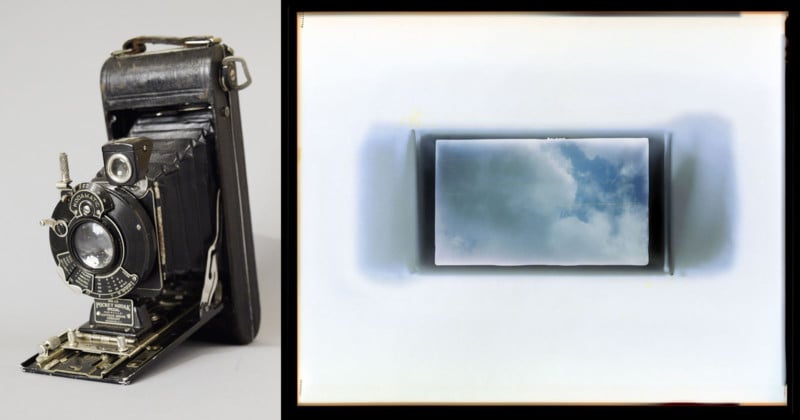 Last summer, I visited Gifford Stevens at his home in Bradley, Maine. He was one of the best teachers I’ve ever had. He taught English at Hampden Academy.

His classes were always fascinating, and a few favorites were Folklore and Outdoor Life. He led a guitar club, took us white water rafting, and I was fortunate enough to have been able to build an Appalachian dulcimer with him.

Gif is retired now (I think he’s on trip 74 around the Sun this year) and spends the summers here in Maine.

Last summer, he wanted to pass a few things along to me. First, he gave me a guitar, a fascinating story on its own. Then he gave me a camera. The camera was once his grandfather’s camera. Alden Gifford Stevens, according to a letter Gif wrote for me to go with the camera, traveled to Africa in 1926 and stayed until 1929. On his travels, he met Ernest Hemingway, the Prince of Wales, and George Eastman among some other notables. George Eastman himself gave Alden this camera!

In 1960, he sent it to Rochester for a bellows repair. The folks at Kodak wanted to buy it for the collection but, to my good fortune, he declined. When Gif handed me the camera, I took off the back and tried to show him the projection of the lens onto a piece of paper where the film would usually go. I was not familiar with the proper functioning of this particular camera so my demonstration failed (so much for that Masters Degree).

This inspired me to make a series of images titled The Shadows and Projections of Cameras Placed On Film.

Usually film goes inside the camera, but I wanted to show the camera as an object and capture the projection through the lens all in the same image. I thought this would elegantly bridge cameraless and camera-based work.

By removing the backs of several cameras then placing them on larger sheets of film in film holders, I was able to make it happen. I was most surprised by how much information rendered on the film around the camera. In the images with 4×5 cameras, a trace of the handle is apparent!

The exposures were midday in the late summer and, given the process, some areas of the film around the camera would have been subjected to direct sunlight for 1 to 2 seconds. I would have thought this amount of light would have overloaded the film and not allow for any subtlety.

Other images were made at night with 1 to 2 hours of exposure.

Some good things do happen when a student tries to teach a teacher something and fails, but he doesn’t stop trying.

P.S. One of the coolest things I got that day was a photo of Alden taken with this camera on his journey.

About the author: Caleb Charland is a photographer best known for his photos inspired by his scientific curiosity. You can find more of his work on his website.