What is the resolution of the human eye? You might think it’s a straight forward question with a straight forward answer. We have a certain number of photon collecting cells in our retina much like an image sensor right? So we should be able to pull a ‘megapixel’ count of sorts out of there.

Well, actually, it’s not nearly that simple. And in the video above, video blogger Michael Stevens (aka. Vsauce) explains why, before ultimately answering the question anyway.

The reason this question doesn’t have a straight forward answer is that our eyes don’t see the same way a video camera does. We don’t see in fully formed snapshots with even resolution throughout. In fact, each ‘frame’ or glance our eyes pick up is rather crappy; an image that “would hardly even acceptable on a broken TV screen,” as Stevens puts it.

As this XKCD comic on the visual field (click image for high-res) outlines beautifully: we have blind spots, eyeball ‘goop’, and a significant drop off in our ability to see color and detail as you move away from the exact spot we’re staring at. 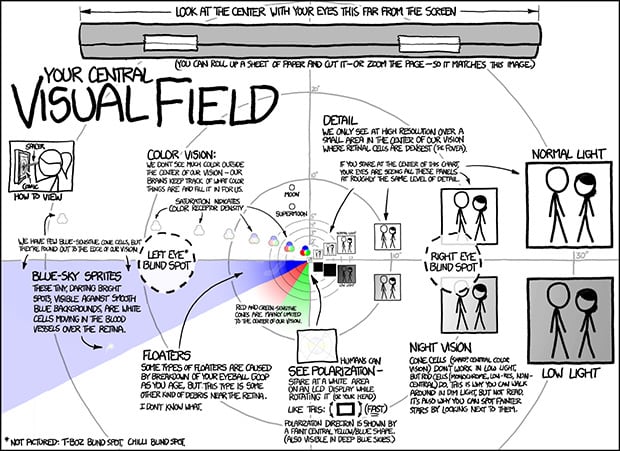 The truth is, high-resolution sight as it were only actually occurs in the very middle of your vision, a tiny circle that extends two degrees from center and is detected by the high-res portion of your eye called the Fovea. Everything else blurs out and is filled in by your brain as your eyes move around and pull in a constant stream of visual information.

So… knowing all this, is it even possible to answer the question in the title? The answer, as with so many things in this world, is ‘sort of’ — and Stevens does eventually get to that answer (there are actually two answers) at the end of this fascinating video.

To find out those answers and much more from Stevens as he dives into the fascinating subject of human vision, check out the video at the top and reference the video description for links to all of Stevens’ source material.

50 Photography Quotes to Inspire You