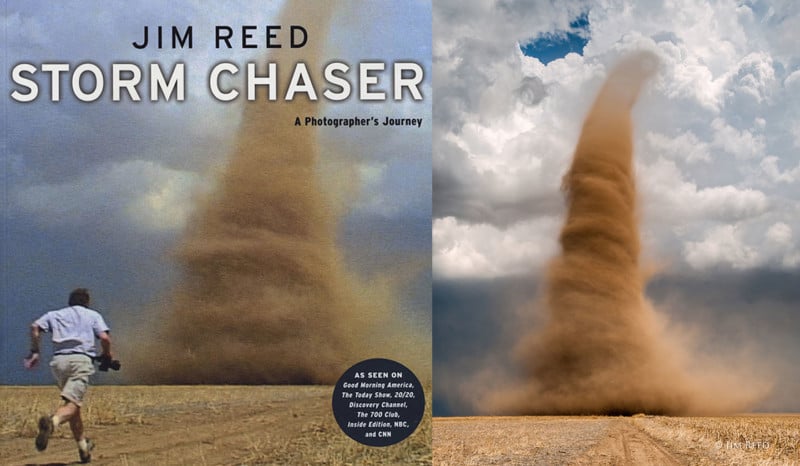 This week marks the 10th anniversary of one of the most memorable, satisfying and career-changing days as a professional extreme-weather photographer.

In early 2008, Nikon asked if I’d test-drive the D700, the company’s latest DSLR camera at the time, ahead of its launch. I accepted the challenge and my goal was to capture striking and severe weather images.

I began shooting on April 3 and spent the next month in the field traveling through Texas and Oklahoma. I wasn’t, however, finding the storm I wanted: something extra picturesque over a stark landscape.

May 8 marked the shoot’s 36th day and by this time, I was in Colby, Kansas. I had a gut feeling it was going to be a good day and hoped to finally shoot a landspout tornado.

A landspout tornado is a colloquial expression describing a non-mesocyclone tornado that frequently looks like a waterspout, only on land. They’re commonly weak (with winds under 85mph), slow-moving (less than 10 mph), rarely come with hail or lightning and can be more photogenic than other types of tornadoes.

Once outside my hotel, I suddenly grew concerned. It was cloudy and cold in Colby. We needed clear skies and heat. Still, the forecast was promising— surface low near the KS-CO border with a dry line bisecting it, meaning possible storms. I then did something I rarely do; I prepped all my gear for immediate shooting before leaving the parking lot. Typically, I ready my gear about two hours into a chase or as soon as I have a target storm.

We spent the morning driving and at 12:30 pm I stopped two miles south of Tribune, near Highway 27 and T Road. I shot stills with the D700 and less than 30 minutes later, to my excitement, saw a developing thunderstorm.

I drove a mile east of Highway 27 to monitor the storm and at the time was shooting with the D700 for wide shots and the D3 for close-ups. While shooting a few frames of the updraft base, I spotted a funnel and the prospects of a landspout tornado looked better and better by the second.

At 2:24 pm the funnel elongated toward the ground, so I called the National Weather Service (NWS) to report a possible developing tornado. Thirty seconds later, I spotted a swirling debris cloud on the ground three miles to our southeast—with only clear sky between it and the funnel. The vortex had yet to fill in with condensation or dirt, but debris meant a full-fledged tornado.

My next objective was straightforward but challenging: to successfully intercept the tornado using a limited number of dirt roads. My vehicle’s alarm sounded as the NWS issued a tornado warning. I drove while Robin Lorenson, my photo assistant, shot video. The tornado was moving north-northeast at about 5 mph. Timing was everything. This is where years of experience come in handy – and good luck.

At 2:32 pm we were about a mile from the approaching tornado. We jumped out, and I began shooting with both the D3 and D700. The storm was low-topped—maybe 25,000 feet tall.

It was one of the most spectacular sights I’d ever seen: a beautiful landspout tornado spinning across the golden plain. After five minutes of shooting, we drove north, the tornado about a mile off to our east. “Ready to get close?” I asked Robin. She was.

At 2:42, we jumped out, cameras firing. We were so close we could hear the tornado, which sounded like a rushing waterfall. Dust fell all around us. “We may have to change positions very, very quickly,” I cautioned, and all of a sudden it was heading straight for us, picking up speed.

“Get in the vehicle!” I hollered. “Keep shooting no matter what.” As soon as our doors were closed I reversed and slammed on the gas. To escape the tornado, I had to drive very fast backward, keeping us in the road’s grooves. As I steered looking through the rear window, Robin described what she was seeing. “It’s getting closer and it’s growing—it’s coming towards us.” The tornado was now chasing us down the road. “It looks like it’s filling out.”

Ironically, when I heard this, I suspected the tornado was weakening. This had happened during an intercept I had near Pretty Prairie, Kansas on April 11, 2002. I’d since learned that I could have stopped much sooner and the “filling out” or widening of the bottom of the debris cloud was a sign of the tornado weakening.

So now I decided to stop. The tornado was 500 feet away and slowing. I jumped out and started shooting as the towering vortex literally stopped. “Robin, it stopped right in front of us! Get out and shoot it! We’re okay.” I fired off as many shots as I could with the D3 and D700.

That’s when I went for what I thought might be the shot of a lifetime: I ran toward the landspout. My close-up view was extraordinary. Flying dust stopped me about 150 feet from the landspout. I fired off a few frames, but what I really wanted to do was stand there and take in the extraordinary interaction with nature.

As the landspout dissolved, I slowly walked backwards toward the vehicle. I just didn’t feel it was respectful to turn my back on the vortex. Seconds later, the vortex collapsed, sending a tidal wave of dust over me. We were covered in it, but both cameras kept working perfectly.

Nikon used several of these photographs in print ads. The video of me running up to the landspout was used in an international TV commercial and on the Weather Channel, and it has been viewed on YouTube millions of times.

Over the years, the images have been featured in numerous magazines, including National Geographic; several book covers; calendars, three TV weather specials; and a museum exhibit.

I’ll always be grateful for that amazing assignment, to Robin for her shooting, and to nature for allowing me to get so close. Happy 10th anniversary to everyone who played a part, and here’s to shooting the next adventure!

About the author: Jim Reed is a National Geographic photographer based in the United States who specializes in extreme weather. His tornado images have received many awards including Communication Arts, PDN Photo Annual, American Photography, and Pictures of the Year International. You can find more of his work on his website, Twitter, Facebook, and Instagram.

A Comparison of all the 120 Film Stocks on the Market