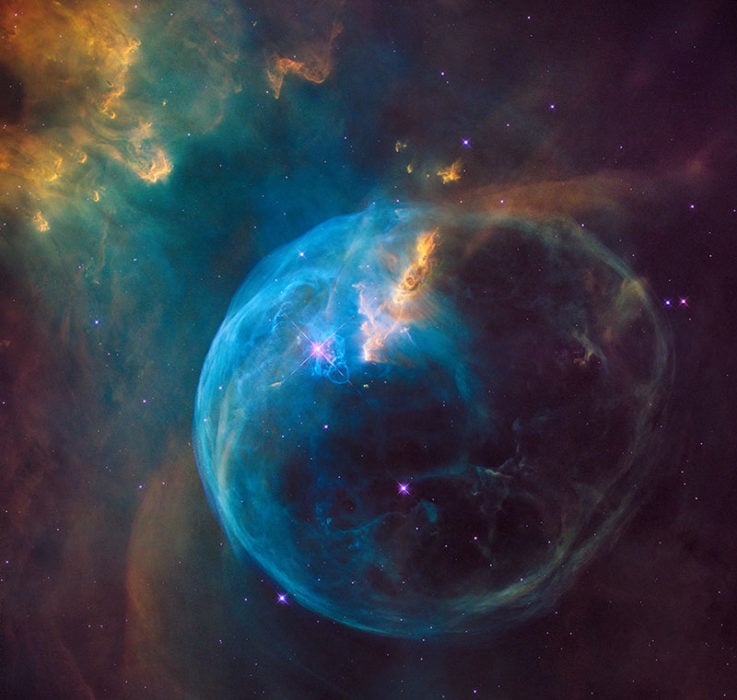 Earlier this year, to celebrate the 26th birthday of its Hubble Space Telescope, NASA shot and published this gorgeous photo of the Bubble Nebula, which has a balloon-like bubble that’s expanding in space from a super-hot, massive star that’s 45 times more massive than our Sun. The image shows the bubble with never-before-seen clarity.

NASA pointed the Hubble’s Wide Field Camera 3 at the bubble and captured it with a total exposure time of 3.5 hours with blue, green, and red filters. The separate images were then combined and edited to produce the image seen above.

Here’s a 3D visualization of the Bubble Nebula in space:

“The seething star forming this nebula is 45 times more massive than our sun,” NASA writes. “Gas on the star gets so hot that it escapes away into space as a ‘stellar wind’ moving at over 4 million miles per hour.”

“This outflow sweeps up the cold, interstellar gas in front of it, forming the outer edge of the bubble much like a snowplow piles up snow in front of it as it moves forward.”

The Bubble Nebula in the photo is 7 light years across (about 42 trillion miles) and is found about 7,100 light years from Earth. You can download an ultra-high-res 58 megapixel TIFF of this photo from HubbleSite.