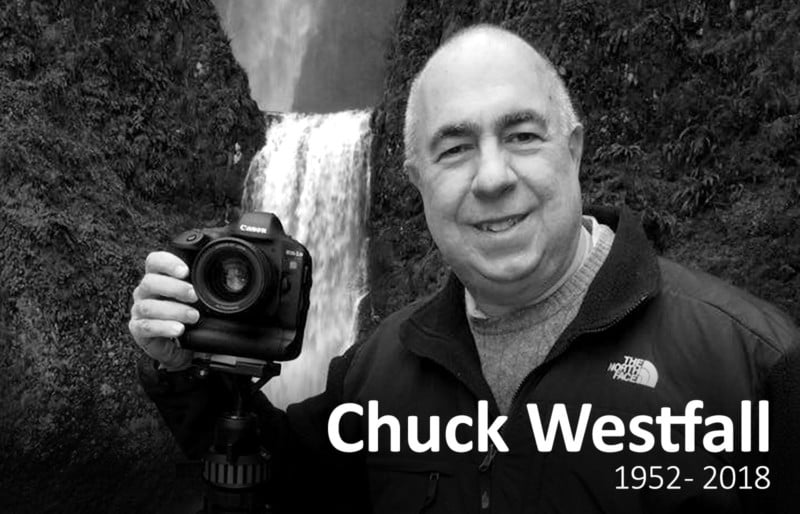 Chuck Westfall has died. A legend in the camera industry, Westfall was a photographer who served as a technical representative and advisor at Canon for decades.

Nancy Winnings, Westfall’s sister, announced the news today in a Facebook post, sharing the above photo and writing: “This gentle man passed away today. He was a loving son, husband, father, brother, and friend. Service details to follow.”

Canon writes that Westfall earned a photography degree from the Rochester Institute of Technology and spent 10 years doing commercial photography and photo retail work before he joined Canon in 1982 as a Technical Representative.

Over the years, he climbed the corporate ladder and eventually became Canon USA’s Technical Advisor for the Consumer Imaging Group. In this position, Westfall regularly connected with photographers, journalists, companies, and retail outlets, become well known for his technical expertise regarding Canon’s camera equipment.

Westfall had a hand in the development of some of the camera industry’s best-known digital cameras. In 1994, he helped Canon and Kodak develop the pioneering EOS-DCS line of digital SLRs. He would later go on to help Canon in developing its market-leading digital cameras for both consumers and professionals.

Westfall’s status in the photo industry was so revered that 2008 saw the launch of the popular industry blog Fake Chuck Westfall — the identity of “Fake Chuck” was revealed in 2014.

People across the photography industry are now posting tributes to Westfall on social media:

I'm so sorry to hear about the passing of @CanonUSAimaging Chuck Westfall. He was a good man and will be missed. My thoughts and prayers to his family and friends.

From Facebook, minutes ago:
This is Chuck’s sister, Nancy Winings. This gentle man passed away today. He was a loving son, husband, father, brother, and friend.
Service details to follow.
RIP Chuck Westfall pic.twitter.com/p69n9yg2hW

I am deeply saddened after learning Chuck Westfall passed away. Wishing the best for his family.

So sad to hear about the loss – all our loss – of Canon's Chuck Westfall. We all learned a ton from Chuck – and loved him. Every time I hear Jethro Tull, I think of Chuck. That will continue…. 😪 pic.twitter.com/OKmE6SRxjn

“Chuck was also unusual for the exceptionally high regard in which Canon’s headquarters management held him,” writes Dave Etchells of The Imaging Resource. “Japanese and American culture and management styles are very different from each other, and it’s rare to see someone so thoroughly bridge that divide, earning the deep respect of Japanese management in the way Chuck most certainly did.”

RIP, Chuck Westfall, and thank you for your service to the world of photography.

Update on 3/26/18: If you’d like to support the Westfall family, there is now a crowdfunding campaign to raise money for Westfall’s daughter’s college tuition.

Image credits: Header illustration based on photo by Nancy Winnings

Photography Contributes $10.2B to US Economy: Govt Report