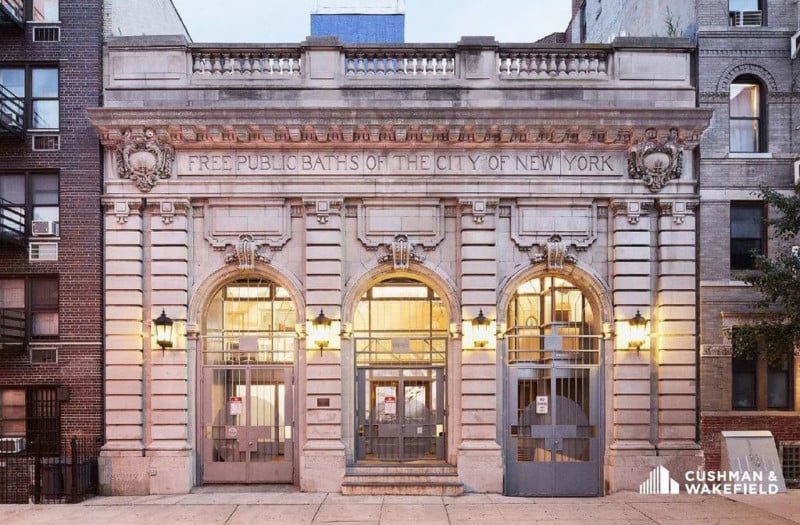 Have extremely deep pockets? You could be the owner of the New York City photo studio created by famous American photographer Eddie Adams. Bathhouse Studios is on the market, and the asking price is a cool $19,950,000.

The one-of-a-kind multi-level studio and event space is located in Manhattan’s East Village at the address 538 East 11th Street. It was originally built in 1904 as a public bathhouse with Neo-Italian Renaissance style architecture, and the facade still reads: “Free Public Baths of the City of New York.”

Eddie Adams, best known for his Pulitzer Prize-winning photo of the execution of a Viet Cong soldier, purchased the building and converted it into a high-end photography studio in 1995.

Adams passed away in 2004, and his wife Alyssa Adams, co-founder and executive director of the prestigious Eddie Adams Workshop, continued on as the proprietor of the building. But Alyssa has now decided to put the building up for sale, and it seems likely it will be radically transformed and no longer be used for photographic purposes by the new owners.

You can find the full details and some photos of the building’s interior spaces in this document by Cushman & Wakefield:

“This is an extremely rare opportunity for residential and commercial end users to acquire the only first class freestanding building featuring an expansive studio, event space, fully renovated residence and landscaped roof deck in the heart of the East Village,” writes Cushman & Wakefield, the real estate company retained to handle the sale.

EV Grieve points out that although the building has been designated landmark status, the property has 10,000 square feet of air rights available, meaning a developer could purchase the building and build upwards.

A spokesperson for Bathhouse Studios tells us that no one from the photo industry has expressed interest in buying the building at the time of this writing.

(via Cushman & Wakefield via Resource Magazine)