A popular YouTube personality with over 780,000 subscribers has caused a stir by claiming that he ordered a $6,000 DSLR from Amazon but received a camera box filled with rocks instead. And when he was sent a replacement from Amazon, the second box was filled with bricks.

Warning: There’s some strong language in the video.

Chaseontwowheels, a motorcycle vlogger, documented his experience in the 12-minute video above. He says that he originally ordered a $6,000 Canon 1D X Mark II from Amazon — it’s unclear whether the order was sold directly by Amazon or was placed with a 3rd party — and received a legitimate camera box filled with heavy rocks instead (you can watch his original rant here).

After chatting with customer service, Chaseontwowheels received an apology, $20, and a free extra month of Amazon Prime. He says the company also sent him a replacement order within two days.

The vlogger then decided to open the second package on camera just in case, and the video shows him pulling out two wrapped bricks from the Canon camera box. 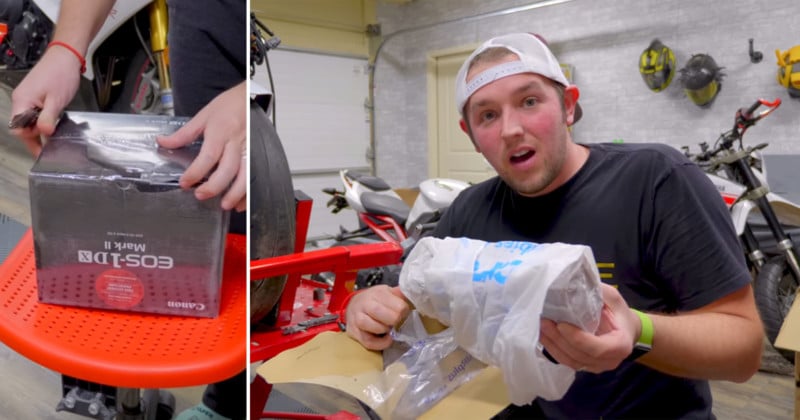 The second video has attracted a significant amount of attention and discussion over on Reddit. Here’s what one commenter who says they were a former Amazon fraud investigator writes:

[T]his happens A LOT, especially with high end items (Mac Laptops, Cameras, Ipads etc). Usually this is the result of someone selling an item that is Fulfilled By Amazon (FBA). There are countless fraud markers that get set off when someone lists a product that is considered high value and high risk, which are then used to hold funds so that the fraudulent seller doesn’t get their money and Amazon can reimburse the customer etc.

However, this can also happen when someone is using a stolen credit card to buy something on Amazon. Using a fake account, they’ll list something (as FBA) and ship it to Amazon. The price can be higher than retail, so no one but the stolen credit card gets to buy it. That way, it costs them some sellers fees/shipping/storage fees and they get their money disbursed because the seller sold a product and it didn’t get returned/negative feedback etc. It happens a lot more than you think.

The consensus in the Reddit community appears to be (1) the video seems legitimate and wasn’t faked, (2) that the orders were from 3rd party sellers, and (3) that it may be the result of a scam seller or a return scam (i.e. people returned rocks and bricks in “unopened” sealed boxes that were then restocked and shipped to new customers).

The good news though, is that Amazon has a great reputation for taking care of customers after scams do happen.

Update on 3/3/18: Amazon tells Chaseontwowheels that it has taken actions against the 3rd party seller that shipped out rocks and bricks. The company also provided a $1,000 gift card for his troubles. Chaseontwowheels turned instead of B&H and did indeed receive the camera he ordered.

This Site Will Tell You If Your Accounts Have Been Compromised

Ep. 258: The Surprising Things One YouTuber Received Instead of a Camera – and more