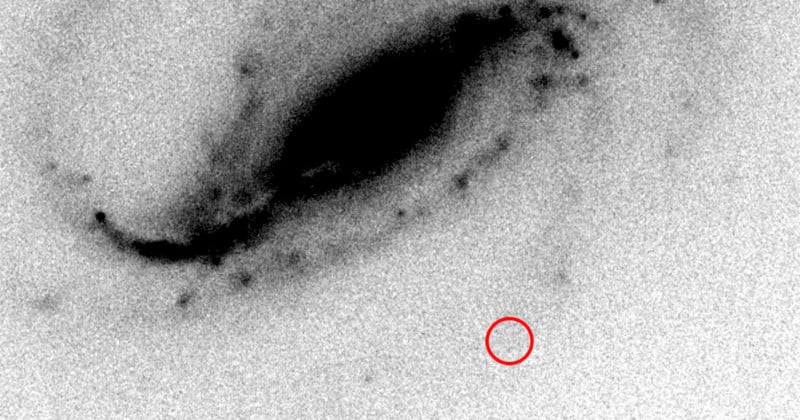 Back on September 20th, 2016, an Argentinian amateur astronomer named Victor Buso was setting up and testing a new camera on his telescope when he captured something that may have never been caught on camera before: the first moments of a supernova.

The 58-year-old locksmith had pointed his camera at the spiral galaxy NGC 613, which is found about 80 million light-years away, and shot a series of roughly 100 photos over an hour and a half with an exposure time of 20 seconds each.

During the last 30 minutes of his picture-taking, his camera caught the explosion of a supernova. Here’s the sequence of photos that shows the supernova explosion (highlighted by the red circle):

Buso’s photos are thought to be the first time anyone has captured the initial flashing.

“We actually think this is the first time an observer recorded the appearance of a supernova literally on camera,” researcher Melina Bersten tells Newsweek. “Some supernova have been discovered hours after explosion. But, Victor Buso caught the exact minutes when the supernova was being born.”

A supernova is when a massive star reaches the end of its life and undergoes a spectacular explosion in death. Since they can’t be predicted beforehand, astronomers aren’t able to train their telescopes and cameras on dying stars to capture the earliest moments, during which there’s a flash that lasts just minutes or hours.

By random chance, Buso was able to capture his groundbreaking photos. Scientists say the odds of capturing what Buso did may be upwards of 1 in 100 million.

Buso’s finding allowed other professional astronomers to quickly train their own telescopes on the new supernova, allowing for deeper research that was published today in Nature.